IT'S finally feeling like fall, but the summer vibes will be going strong on Sunday with the world’s definitive beach band.

To say that the Beach Boys have gone through transitions over the years would be a vast understatement. Currently, the band features two original members, Mike Love and Bruce Johnston, who are dedicated to keeping the tradition alive. 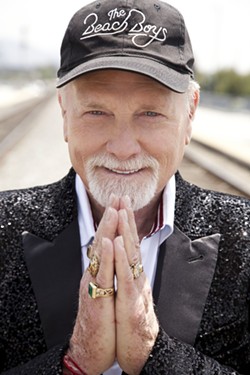 The Beach Boys was formed in 1961 by brothers Brian, Dennis, and Carl Wilson, Love, a cousin of the Wilson’s, and family friend Al Jardine. The young act defined the California sound with songs of beach beauties, perfect waves, and souped-up cars, kicking out singles like “Surfin’ Safari,” “409,” “Little Deuce Coupe,” and beyond.

Three years into their career, the band had recorded three albums, hit the road, and earned numerous top ten hits. In that time, Brian became immersed in the production process, pushing the band’s songwriting and composition, creating emotionally complex songs like “In My Room.”

Eventually, Wilson quit touring with the band, preferring to stay home to write and work in-studio. Johnston entered the band to support live performances. While Love fronted the band on tour, Brian assembled top-notch session players in the studio, finalizing arrangements and laying down instrument tracks before the rest of the Boys came home to track vocals.

In 1966, the Beach Boys shared its seminal album: Brian’s masterpiece Pet Sounds. The revolutionary record is considered one of the most influential of all time for its adventurous departures, multilayered sounds, innovative approach and psychedelic explorations.

Pet Sounds was followed by “Good Vibrations,” a song that would define the counterculture movement of the 1960s and act as a milestone in studio production.

During 1966 and 1967, Brian began working on the Beach Boys’ next album, SMiLE, perhaps the world’s most famous unreleased album. During that time, Brian’s drug dependency was deepening, and his deteriorating mental state eventually led to a nervous breakdown. It’s around this time that a rift formed between the rest of The Beach Boys and Brian.

1967 was a pivotal year for Love. Traveling with the Beatles, he went to Rishikesh in India and studied Transcendental Meditation with Maharishi Mahesh Yogi. It led Love to arrange a Beach Boys tour with the Maharishi—only five of the scheduled shows ended up happening, but the tour is considered one of the strangest moments in entertainment of that era. Regardless, learning about Transcendental Meditation impacted Love for life, and he still practices to this day.

In 1968, as Brian entered the hospital for psychological treatment, the rest of the Beach Boys began writing and producing on their own. The band returned with 1970’s Sunflower and 1971’s Surf’s Up.

After Dennis punched through a plate glass window recording Surf’s Up, a new drummer, Ricky Fataar, was hired, as well as guitarist Blondie Chaplin. The new members performed on the album Carl and the Passions: So Tough. By this time, Brian was no longer an active member of the band; his mental state prevented him from leaving his house, though he did occasionally contribute to Beach Boys songwriting.

The band retired from recording in the mid-1970s, but they enjoyed a renewed interest in the band through the collection Endless Summer, released in 1974 by Capitol. It spent three years on the charts, hitting number one and going gold. Brian got involved with the band once again, and they returned to the studio to make 15 Big Ones.

Around 1980, Dennis and Carl left The Beach Boys, pursuing solo careers. In 1983, Dennis tragically drowned, and the band reunited to release a self-titled album in 1985. The late ‘80s produced the hit “Kokomo,” but were mostly defined by troubles within the band—the Beach Boys sued Brian and Love sued Brian for songwriting royalties. By the late ‘90s, the band had splintered into three factions: Brian Wilson’s solo tour, the Beach Boys, fronted by Mike Love, and Beach Boys Family, led by Al Jardine.

In 2011, the surviving members came together to announce the release of The Smile Sessions and touring dates. Before the end of the 50th anniversary tour, Love announced that Brian, Jardine, and David Marks (lead guitarist during the early 1960s), would not be playing with the band.

While maintaining The Beach Boys, Love has released solo material, most recently Unleash the Love, which touches on rock, gospel, R&B, and pop. He also released a memoir, Good Vibrations: My Life as a Beach Boy.