Bearing the torch for 'Thanksgivukkah' 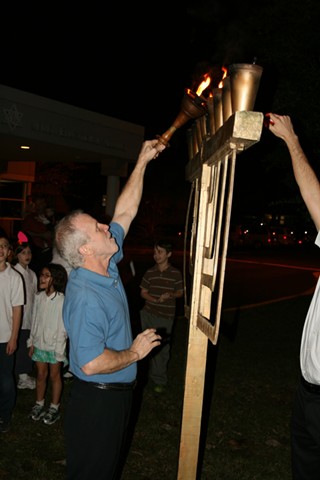 Every year the giant menorah in front of the JEA is lit for Chanukah, but this year the torchbearer might be a a bit out of breath.

Where: Various locations culminating at the JEA, 5111 Abercorn St.

If you hear your Jewish neighbors plotzing more than usual about Thanksgiving this year, there's a reason.

Due to a rare alignment of the Gregorian calendar and the lunisolar calendar used to calculate Jewish holidays, the first day of Chanukah falls on the same day as the traditional American homage to pilgrims and pumpkin pie. For at least several million people, Thursday, Nov. 28, 2013 will heretofore be referred to as "Thanksgivukkah."

While Thanksgivukkah is igniting all kinds of new customs, Savannah's Jewish community is bringing back an old tradition. Technically, Chanukah (also spelled "Hanukkah," "Hanukah" or for the ethno-challenged, "Festival of Lights") begins at sundown Wednesday, Nov. 27. It will be signified by the lighting of the first candle on the menorah, the nine-branched candelabra also known as a chanukiah.

From the 1970s to the 1990s, the first night of Chanukah in Savannah meant the Maccabee Torch Relay, a coordinated effort by members of all three of the city's synagogues. A torch was lit downtown at Congregation Mickve Israel, carried south on foot on Bull Street to Congregation Agudath Achim, turned back north on Abercorn to Congregation Bnai Brith Jacob then finally across Derenne to the JEA, where its flame kindled the massive menorah on the front lawn.

The peripatetic practice has been forgotten over the last couple of decades, and this year's celebratory synchronicity seemed like the perfect time to revive it.

"We saw an opportunity to bring back a fun event and we're doing it!" cheers organizer Carol Greenberg, who encourages Jewish and non-Jewish Savannahians to participate by running, caravanning by car or cheering at the various stops. Runners will be accompanied by a police presence, and each of the synagogues will provide a snack and an educational craft for families.

Chanukah commemorates the victory of a small group of Jewish rebels called the Maccabees over their Hellenic occupiers sometime around 167 BCE. After the fierce Maccabees (translated as "the hammers") recaptured the temple in Jerusalem, they found only one day's worth of oil to feed the sanctuary's sacred lamp. The paltry fuel supply somehow lasted eight days and nights, and that bright miracle has been celebrated during the year's darkest days ever since.

The Maccabee Torch Relay originated in 1943 in the Israeli city of Modi'in, the reputed gravesite of the Maccabees. Hundreds of communities around the world picked up the custom for Chanukah. In Savannah, the tradition served to unify various subsets as well to honor U.S. soldiers.

"We like to have a military presence since Chanukah celebrates a military victory," explains Greenberg.

Retired U.S. Air Force major Ken Chanin served his final tour in Afghanistan earlier this year and will carry the torch for the first leg of the 4.8-mile relay. Compared to the harshness of a war zone, the challenge of carrying the torch all the way from Monterey Square to Lee Blvd. doesn't faze Chanin.

"It's not like I'm going to be running in my fatigues doing a ruck walk," he laughs, referring to the rigorous marches of basic training.

He was eager to participate in the relay's revival, citing inspiration from a quote by Holocaust survivor, author and philanthropist Elie Wiesel: "To be part of a community, to shape it, and to strengthen it is the most urgent, the most vital obligation facing the Jewish individual."

To that end, the event also includes "Warm Up Winter," a coat drive to benefit the clients of Union Mission. Barrels to collect new and gently-used outerwear for men, women and children will also be at each relay station. Blankets will be accepted as well and delivered to Union Mission's Fahm Street location.

The event's organizers emphasize that while the holiday has come to be known for its gift-giving and games, Chanukah also celebrates a re-dedication to the Jewish principles of tikkun olam ("repairing the world"), chesed (kindness) and mitzvot (good deeds). It's also an opportunity to educate non-Jewish denizens about Chanukah traditions old and new.

"There's this misconception that Chanukah is simply the Jewish Christmas," Greenberg. "We want to share the true spirit of it."

Whatever — or however — you celebrate, it will surely be a Thanksgivukkah to remember.

By the way, the last time a convergence of Chanukah and Thanksgiving happened was in 1888; quantum physicists figure the next Thanksgivukkah will take place in the year 79,811.

Let's hope they've invented a robot to do the dishes by then.