HELEN WASHINGTON likes to say she has a "living room with a view."

The sprightly senior has lived on Henry Street for over 60 years, most of them in the lovely Victorian across from the red-and-black brick Carnegie Library, an architectural gem that has served this neighborhood for more than a century.

“I admire it almost every day. My children came here for story hour every Saturday when they were little, and the neighborhood association met here for years,” says the 89 year-old Washington. “It’s just a wonderful building.” 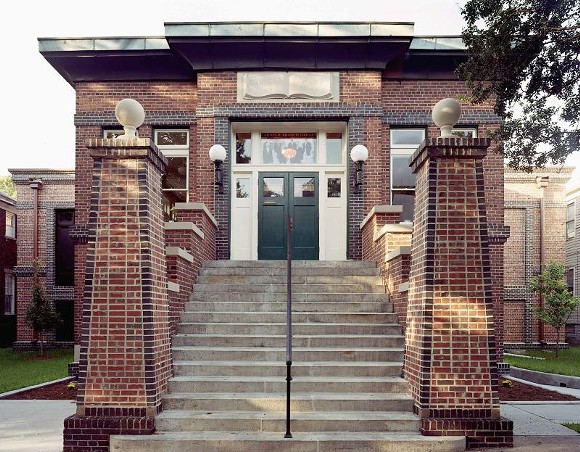 The Carnegie Library on Henry Street founded in 1906 by a group of black businessmen was Savannah’s first public library and the city’s only example of Prairie School-style architecture.

The longtime library volunteer isn’t the only one beguiled by its charms: The Carnegie has been included in the Georgia Public Library Service’s list of the state’s 10 Most Beautiful Public Libraries, a collection of rich history and unique architecture that includes Wilkes County’s Mary Willis Library with its Tiffany-glass windows and the wooded Dog River Public Library in Douglasville.

Should anyone feel like a summer sojourn, the GPLS has issued a “passport” for the literary- and architecturally-minded to collect stamps from all ten edifices.

“Of the state’s four hundred and nine libraries, these ten have been chosen for their distinct designs in form and function,” said State Librarian Julie Walker at a recent dedication ceremony in front of the Carnegie’s stately staircase, its polychromatic pillars topped with sandstone orbs.

“They’re also remarkable for the impact they’ve had on their communities.”

Designed by local architect Julian deBryun Kops and dedicated in 1914, the Carnegie is the city’s only example of the Prairie School style developed by Frank Lloyd Wright, known for its graceful lines and restrained embellishments.

It is also Savannah’s first public library, established by a group of African American business leaders who founded the Colored Library Association of Savannah in 1906 after the city had partnered with the Georgia Historical Society to open a small facility that served only white citizens.

The association opened its own book-lending spot in a doctor’s office at the corner of Hartridge and Price Streets, stocking it with donated materials and continuing to build support from the black community. In 1913, the library board submitted an application to the Carnegie Foundation, an endowment established by populist millionaire Andrew Carnegie for the purpose of founding public libraries in the U.S. and around the world that bankrolled more than 1700 libraries from 1859 to 1929.

“I love the story about Andrew Carnegie because he believed so deeply that libraries lift people up and are the most democratic of institutions,” said Walker.

The petition—which required proof of land ownership and matching funds—was approved for a $12,000 grant, two years ahead of another local proposal that eventually became the white-only Bull Street Library. (The neoclassical marble structure receives an honorable mention in the “Georgia’s Most Beautiful Libraries” passport.)

The Carnegie served as a nexus for African American education and fellowship, providing a clean, well-lighted place to read for U. S. Supreme Court Justice Clarence Thomas, who grew up in the Pin Point community on Skidaway Island, as well as Pulitzer Prize-winning author James Alan McPherson, a graduate of the Iowa Writers’ Workshop and MacArthur fellow best known for the short story anthology Elbow Room.

The Carnegie also had a profound influence on Savannah’s African American political landscape. At least three former mayors cite time logged as children amongst the wooden shelves, and many recall discussions of the burgeoning Civil Rights movement at Savannah’s “colored” library.

“Without the Carnegie Library, many successful blacks in this community would have had a difficult time accomplishing the many things they have achieved,” wrote former school superintendent Virginia Edwards in 2014. “The library provided information and knowledge that was of great benefit to our overall success.”

Carnegie users continued to lobby for equal access to other facilities and materials, and after a discrimination lawsuit was settled in 1963, the city’s first public library became incorporated into the larger Live Oak Public Libraries system. These days, it serves as a quiet respite for a diverse neighborhood of families, college students and older citizens. 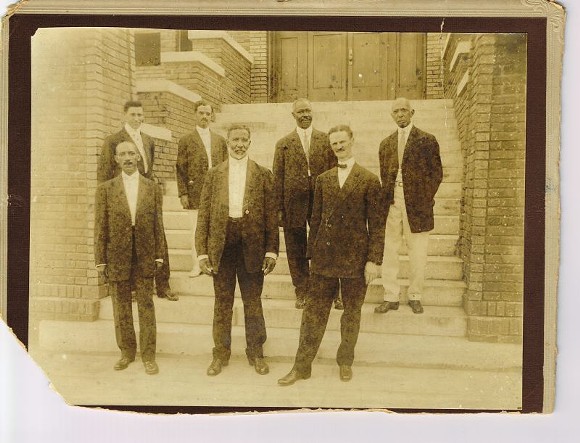 “It’s my library, I use it for everything. They found me the graduate school study book I needed, and I come here when my internet isn’t working,” says Savannah Law School student Eric Fritch, who attended the dedication ceremony.

“I’m so proud to live next door to such a cultural asset and see it get the recognition it deserves.”

A 2004 retrofitting has kept the view from Washington’s side of the street as impressive as ever, and the library’s remarkable architecture and story remains a draw.

“We get a lot of visitors who come here specifically to see it,” confirms Carnegie librarian Jacqueline Hinton, who sits at the building’s original wooden desk.

“People from all over the world are interested in its history.”

That doesn’t seem to the be the case in Washington, DC, where the current presidential administration has slated the elimination of federal funding for libraries in its proposed budget, a move The American Library Association calls “counterproductive and short-sighted.”

While state librarian Walker says that the tiny amount of money that trickles down from the federal government wouldn’t necessarily close the Carnegie’s sturdy double doors if it dried up, it does help the state pay for valuable services like the Summer Reading programs.

“We’re ‘hiking the Hill’ and pounding the pavement for our libraries,” vowed Poku, describing the agenda for the trip.

“They’re so important to our communities, and we’re going to keep fighting for them.”