Behind the Moss curtain

Stories, songs and schools with one of Savannah's favorite crooners 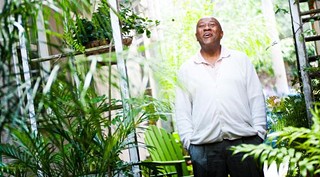 It’s been a bang–up couple of weeks for Roger Moss.

The ebullient artistic director of the Savannah Children’s Choir recently returned from a week in Verona, Italy, where he helped his cantillating charges win a gold medal at the city’s annual choral competition.

While preparing for the trip, the silky–voiced chanteur was also putting the touches on a new CD: He’s just released Sentimental Strain, a collection of sultry standards, grinding blues and a touch of gospel with jazz pianist Eric Jones.

If April brought a sense of accomplishment to the 50–something Tennessee native, the months ahead look pretty fantastic, too: Moss sits on the board of the Savannah Classical Academy, a new charter school awaiting approval by the Board of Education to be located on the east side of the city.

In the meantime, he continues to teach voice lessons privately and as part of the Salvation Army Creative and Performing Arts Conservatory, a grant–funded program for inexpensive quality music and visual arts instruction. He remains dedicated to the ideology that musical education belongs to everybody.

You look terrific. How’d you manage to get so svelte?

Roger Moss: I had a little wake up call recently, and I decided I needed to start taking care of myself. I figured out my body craves good food! Last night I made broccoli, Portobello mushrooms and onions and garlic with a little soy sauce and mustard, and it rocked my world.

I actually lost two pounds in Italy, just doing all that walking around.

How was the Verona competition?

Roger Moss: The kids put on an incredible performance. But you should have seen me at the awards ceremony, I was a wreck!

The way they say “Georgia” in Italy—it’s “Gee–or–gee–ah,” they get in every syllable—and I didn’t want to hear it for the bronze medals. But then they called the silvers. And then they got to the golds. They called another American high school choir we’d become friends with at the hotel from Washington, then they made an announcement—you have to understand, everything had to be announced in five languages—and I thought they’d gone through all the gold medals.
I thought, oh god, we’re going to end up with some little certificate, like “thank you for participating” or something. Then I heard, “Sah–va–nnah Gee–or–gee–ahhhh!” and I was stunned. I was shaking so hard, I couldn’t even hold the trophy, I had to pass it over to Cuffy [Sullivan, SCC’s executive director.]

What’s on the new CD?

Roger Moss: I love American music, and these are absolute gems from the American songbook, everything from Duke Ellington to Gershwin to [Antonio Carlos] Jobim, plus two hymns.

The CD is just myself and Eric Jones, who is brilliant as hell. What Eric does with the piano, it’s incredible. His piano became an orchestra. You can hear the bass. He laid out this musical arrangement to accompany me, but I feel like I’m accompanying him.

The music is so lush. It is sounds like a rainy Saturday afternoon, and you’re sitting on the porch, sipping a nice glass of wine.

This CD has what I consider the “Savannah sound,” that wonderful Southern influence. There’s one song called “Lazy Afternoon” by John La Touche with such Savannah–esque lyrics:

and the beetlebugs are zoomin’

and the tulip trees are bloomin’

and there’s not another human in view but we two...

There’s also really interesting version of “Summertime,” not typical at all. We did it as this nasty, nasty blues number.

Roger Moss: Yes, a friend of mine calls the CD “babymaking music.” (laughs)

How long have you been teaching at the Salvation Army Conservatory?

Roger Moss: I’ve been with it since its inception three years ago. The whole idea was to have expert teachers provide this opportunity for kids who otherwise wouldn’t have it. There were some challenges at the beginning, but the couple who is running it now, Jessica and Stephen Munch–Dittmarr, really have it together.

My whole thing, musically and educationally, is providing kids with the best. No matter what their family’s income, no matter their background, if they’re willing to make the commitment to do the work, we need to be there to give it to them.
That’s why we started the children’s choir, it’s why I’m involved with the Salvation Army, and it’s why I’m on the board with the new charter school.

Can you talk about Savannah Classical Academy?

Roger Moss: The philosophy behind classical education is not only to raise informed students, but to raise good people. It’s a content–rich education.

Charter schools are public schools that are allowed to be somewhat autonomous of the Board of Education. We have our own disciplinary policy. We’re starting foreign languages in kindergarten.

Music and art are not electives but provided as part of the regular curriculum. How can you learn the history of an era without learning about its art and architecture and music?

We also get to hire our own teachers. We’re looking for teachers that are demonstrating their content: We want historians teaching history, scientists teaching science, etc. We want people who are passionate about their subjects.

Are you focusing on a specific part of town?

Roger Moss: We’re looking at the old Ramona Riley building on Waters and Anderson and another site at the Old Daniel Lumber property on the east end of Gwinnett. The point is to serve those areas, which don’t have access to the great schools. A great school can transform a neighborhood.

Although charter schools aren’t neighborhood schools, we are going to be active in recruiting students from those neighborhoods. We’ll open at a little over 400 students. That sounds ambitious, but based on the number of kids who are on waiting lists for some of Savannah’s other magnet schools, I think we’ll be fine.

When are you planning to open?

Roger Moss: We’ve filed our charter with school board, and our goal was to open in fall 2013. However, we’ve gotten opposition from the people at 208 Bull Street, who say that “urban classical education curriculum isn’t supported by educational research.” Which is a total fallacy.

I’ll be speaking to the school board at the Bull Street office this Wednesday, May 2 at 3 p.m. All the parents whose children have been on waiting lists for Savannah’s charter schools are invited to come. It’s the public’s money, and we need to let the board know how we want it spent.

What drives your passion for education?

Roger Moss: I know the power of education. For a lot of kids, it’s the one advantage that will bring success.
My grandmother was an educated woman in rural Alabama, and she was the only person for miles who could read. She used it to secure property, and she owned a lot of it, which was pretty amazing for the early 1900s. That black woman ruled!

She insisted that her kids be educated, and that was passed down. In my family, there are 22 PhDs. I’m the least educated, and I have a B.A.

My passion for the charter school came out of my involvement with the children’s choir. It’s living proof that you can take any kid, from any school, and put them in an environment where being smart is cool. And guess what? They thrive.

Why not help these kids? Why not provide these opportunities? Why not?