For local breweries and their employees, there's more to the Festival

To find out more about where these breweries will be pouring during Savannah Craft Beer Week as well as the rest of the week's schedule of beer events, visit SAVCraftBeer.com.

Beer festivals can be tons of fun for the revelers who spend the day sipping suds and toasting with friends. But the brewery employees who make the journey and effort to participate have to balance that convivial atmosphere with the harsh realities of another day at the office.

No brewery will be more active and visible during Savannah Craft Beer Week than Savannah’s own Southbound Brewing Co. Co-founder Carly Wiggins wears many hats at the still small but rapidly expanding beer producer, including the responsibilities of marketing and promotion.

She and her co-workers will be sponsoring more than ten events during the lead-in week to the Savannah Craft Brew Fest as well as having a large presence at the festival itself.

“We’re trying to make something happen every single day,” said Wiggins while taking a brief break from spreadsheets and projections to talk about her intense schedule for the week.

Along with pint glass giveaways and tap takeovers, they also scheduled more intimate gatherings like a meet the brewer night at Ampersand where attendees can pick the brains of brewers Smith Matthews and Alex Breard.

“People can ask them questions about anything. Sometimes it’s people who love beer or who want to start their own brewery and want to learn about the path we’ve taken,” added Wiggins.

At the Savannah Craft Brew Fest on Saturday, Southbound will be releasing its new Fade to Red beer and backing the photo booth attraction, where festival-goers can get a fun, themed snapshot to remember their day in a brewery-branded glossy.

But the core focus of his week will be on the Savannah Craft Brew Fest itself, which he also attended last year.

“With more and more festivals happening each year we are getting to a point to where we can’t attend them all, but this is one that I think a lot of breweries try to participate in, due in part to Savannah being such a fun place to be, with burgeoning tourism and an emerging craft scene as well,” said Sikes.

In his job promoting Founders, which is based on Michigan, Sikes added “It gives us exposure to consumers who have never heard of Founders before and gives them a chance to try our beers and see what we’re all about.”

That take on festival day appearances is shared by Will Avery, head brewer for Kennesaw’s Burnt Hickory Brewery. He sees beer festivals as a chance to interact with beer drinkers one-on-one.

When discussing the Savannah Craft Brew Festival, he said “I was there for the whole fest last year. I drank our beers all day and talked to people.”

He plans on doing the same this year. “I don’t view festivals as recreational. Part of my job is to rep a product I work on 10-14 hours a day.”

A wide variety of Burnt Hickory’s beer will be available at its Tap Takeover at Your Pie in Sandfly on Friday night, where all of the available draft beers will be exclusively from Burnt Hickory. Flagship brews Ezekiel’s Wheel and Cannon Dragger will be there, along with this year’s version of 9353, a beer Avery describes as a Peach Berliner Weiss.

The event will also feature the very last keg of music-inspired beer Lake of Fire, a red rye ale influenced by band The Meat Puppets. The similarly rock-n-roll themed Toolin’ for Ale-nuss is a riff on the punk music of The Meatmen. Ale-nuss is so limited that Your Pie will see the only keg outside of those kept at the brewery reserved for tours and tastings.

After a full week of smiling, shaking hands, giving out swag and educating fans about beer, these industry players and their cohorts will be ready and deserving of a vacation from all the festivities.

“Monday, yeah. I’ve got to take Monday off,” said Southbound’s Wiggins. “Hopefully, I’ll be able to sit on the beach and talk to nobody.” 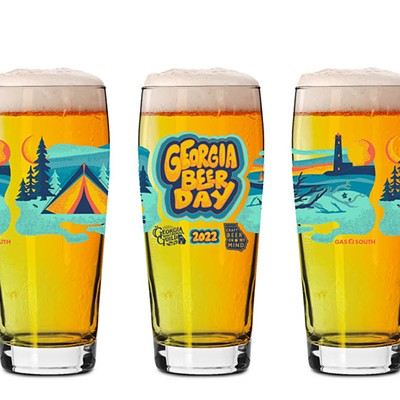