Or does Ben Carter not have enough skin in the game? 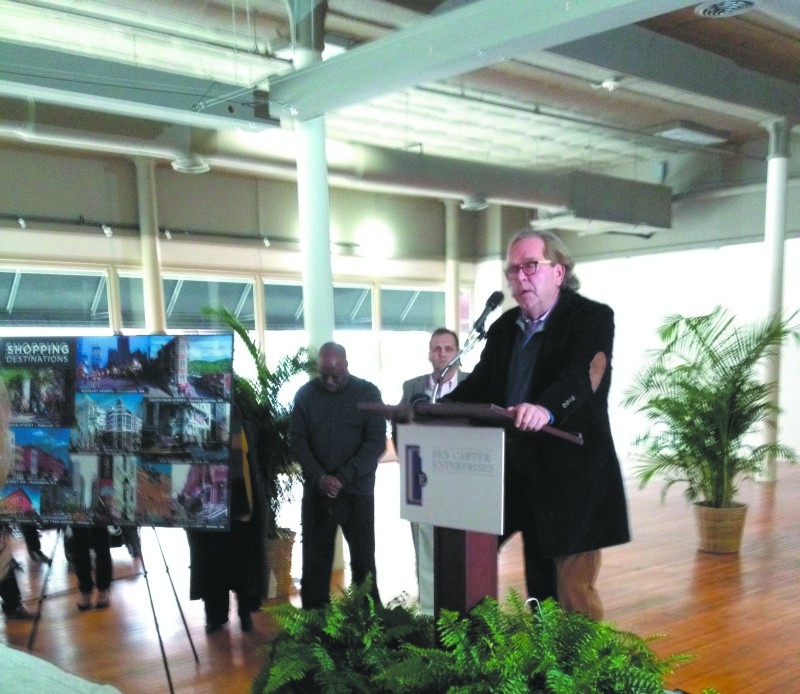 THE PROMISED MAKEOVER of Broughton Street after the planned purchase of about two dozen properties there by Ben Carter Enterprises has been greeted by hosannas of praise from local leaders, who see the dramatic influx of investment as a "game-changer," in the words of Alderman Van Johnson.

Redolent with Southern charm and sporting an old-school tweed jacket with elbow patches, the Atlanta developer seemed to hit all the right notes in a rare press appearance last week in the unoccupied ground floor of one of two Broughton buildings he says he's already closed on, the former Clipper Trading space at 201 W. Broughton.

(The other closing claimed by Carter Enterprises and announced by his local realtor, Judge Realty, is the former Loco's/Satisfied space at 301 W. Broughton. The remaining 22 are still under contract, so technically anything can happen.)

"What we're doing is not easy," Carter said. "If it was it would have been done before."

If all of his stated contracts close in the series of "tranches" through the rest of 2014 that Carter describes, his Broughton portfolio would comprise about 150,000 square feet of retail and restaurant spaces, "mostly at first and second levels, some basement," he said, creating about 800 new retail and food-and-bev jobs.

However, one Broughton Street merchant we talked to says it's not quite that cut-and-dried.

"So far he's essentially just bought interest in some condos in one building and is subleasing another building," says the merchant, who preferred to remain anonymous. "The truth is Ben Carter doesn't really have that much skin in the game right now."

Condos aside, Carter Enterprises also has plans to renovate many of the upper floors of the acquired spaces to about 80 "urban-style loft apartments."

Carter concurs that "a lot of the buildings we have are vacant and have been vacant for years. In a lot of these buildings the upstairs have not been occupied in 30, 40, 50 years. Which is a challenge. But in the end they're heart pine floors, they're brick walls, they're 12-foot ceilings, with beautiful windows."

Much of the conversation centered around Charleston's King Street, a national model of a thriving and diverse downtown shopping district. While bolstering the similarity between King Street and his vision for Broughton, Carter also seemed to make it clear he wasn't shooting for an exact facsimile.

"I've seen what happened on King Street. We had some fantastic locals that got moved out to Upper King when the nationals came in. That's not good. It's not why people come. They're not coming to see national retailers, they're coming to see what the fabric of this city has to offer."

Some voices with long backgrounds on the street, however, urge caution and some healthy skepticism.

"I'm very enthusiastic and supportive whenever anyone looks to Broughton and realizes what a gem it is and wants to invest here," says Ruel Joyner, owner of 24e, a home furnishings store in a building on Broughton Street that's been in his family for generations.

However, Joyner adds, "In this case I just hope that everyone keeps their heads. Frankly I think it's a little premature to call a press conference about it. If this is worthy of its own press conference, there are some other great things going on locally we could throw a whole parade for."

While Carter's efforts to acquire property on Broughton began in 2013, Joyner says he began to "lose confidence" in the big new vision for Broughton this year, when persistent rumors began circulating on the street about high-end retailers such as Louis Vuitton and J. Crew coming directly into Joyner's building—despite Joyner already having turned down Carter's offer to buy it.

Joyner says Carter Enterprises made a very attractive offer to buy his building at 24 E. Broughton Street, for which his business 24e is named.

"I told him categorically that the building's not for sale. And the rumors about J. Crew or Louis Vuitton coming into my building are categorically untrue," he says.

"I've spent too much time and energy here to leave. This street is in my blood."

Of those who have sold to him, Carter says, "A lot are people who own the retail businesses they're in, who decided to take cash and relocate, or take cash and retire. We're very mindful of the better retailers. In the case of a lot of the ones I really like, we've asked if they want to sell. But the ones that don't and have great retail, that's wonderful to me."

Still, Joyner's refusal to sell means that Carter will not own four contiguous properties on that block. Carter has pending contracts on the building on Joyner's eastern side and on two buildings to the west of 24e, currently housing Mirage/Civvie's and Gaucho.

While Carter and realtor Lori Judge worked hand-in-hand assembling his Savannah portfolio—almost literally hand-in-hand, as Carter describes the pair strolling down Broughton picking out prospective properties like flowers in a field—the owners of those properties apparently were rarely or never informed of the scope of his vision.

One Broughton owner selling to Carter tells Connect, "I've still never met Ben Carter. I only worked through Lori. Nobody told us the extent of his plans. I found out more about his plans in the newspaper and on TV than anywhere else. I'm happy with the price I got, but if I'd known what he was planning I could probably have gotten maybe a half million dollars more."

That owner, who preferred to remain anonymous, says while it was still an offer impossible to refuse, also worries that after Carter brings in more boutique retail, "Broughton Street could be untouchable" for local businesses.

In a roundabout way Carter did address one of the most frequently heard merchant complaints about Broughton: That most nights the street is largely empty of foot traffic after the sun goes down.

"We're hoping that occasionally the City will allow us to close down a couple blocks at a time, to be able to do things that are culturally oriented and entertainment oriented," he said.

Carter's admitted "target" for the redevelopment is Savannah's growing creative class of young professionals and their families.

"That's where America's going. What happened to our downtowns was the suburbs sucked out the residents and sucked out the jobs. But you have people here who've already decided they want to live in town instead of in the suburbs, which is very unusual," he said.

"This is not a downtown revitalization project. Your downtown is vital. It just needs some amenities."

The conundrum that remains unaddressed, however, is will that creative class even be able to afford Carter's "amenities?"

Not only that—Rose has been on Broughton Street for two decades, as a resident and as a professional, and has seen its evolution first-hand.

"We have a main street that's fared much better than most 'post-mall' cities," Rose says. "The current recipe is working, even through a tough economy. Hopefully any new plans keep that in mind. The street is at a high point from my perspective, but still a far cry from the 'white-gloved' shopping heyday I've heard so much about."

As for the retail sector, there's the possibility that Carter's direct impact on the more established names may not be that dramatic. A look at the map of pending contracts shows few marquee names in the mix.

For example, Carter has no pending contracts on the entire block of West Broughton between Bull and Whitaker, which boasts a particularly diverse array of storefronts including Paris Market, Panera Bread, J. Parker Men's Store, and longtime local establishment Gina's Beauty Supply.

Another fixture, The Men's Store by Joseph, isn't selling to Ben Carter.

Neither is the building hosting Globe Shoes.

Neither is the building hosting Leopold's.

Indeed, fully one-third of Carter's announced Broughton activity is on a single block on the north side of the street, between Barnard and Jefferson. And some of that activity does involve new construction.

Nourish and McDonald's are the bookends, and are the only buildings on that block not under contract by Carter. If the closings happen, Carter's firm will own and develop everything in between those stores, including the building housing Papilotte.

"One of the challenges on Broughton Street is every building is 30'x90'. Most retailers want a bigger footprint," explains Carter.

"We have a couple of larger buildings and a parking lot near McDonald's where we're trying to do some new buildings," he says. "One of our retailers wants us to build a new building. We're proposing one with historic facades."

Across the street from McDonald's, Carter Enterprises has a contract on 223 W. Broughton, home of the now-closing American Craftsman Gallery, which announced its February shutdown several months ago.

By contrast, the very active block including The Gap, World of Beer, Go Fish, Savannah Bee Co., and The Coffee Fox is set to host only two Carter purchases: the building which housed the now-defunct Casa De Moda and the building hosting the "new" Goodwill location (a little over a year ago Goodwill moved there from a different Broughton address, complete with ribbon-cutting).

One merchant renting a thriving storefront who preferred to stay anonymous—untouched by Carter but still watching with a wary eye—tells Connect they're confident "I can stay in business as long as my rent stays about the same as it is now."

The problem, this and other merchants say, isn't only whether rents are raised in Carter's buildings, but if other owners raise rents as a response to high-end retail development Carter spurs all along the street.

However, another Broughton businessperson—the one who questioned Carter's "skin in the game"—concludes with a different warning:

"The thing to watch is the next 30-45 days, to see how many of these properties he actually closes on, or if he bails on them. Or if he just keeps them tied up. That will tell you how serious Ben Carter really is about his big plans for Broughton."