Bernie brings the fire, but are we ready to fuel the revolution?

Who knew a 70-something Jewish grandpa could pack a house in southeast Georgia on three days’ notice? 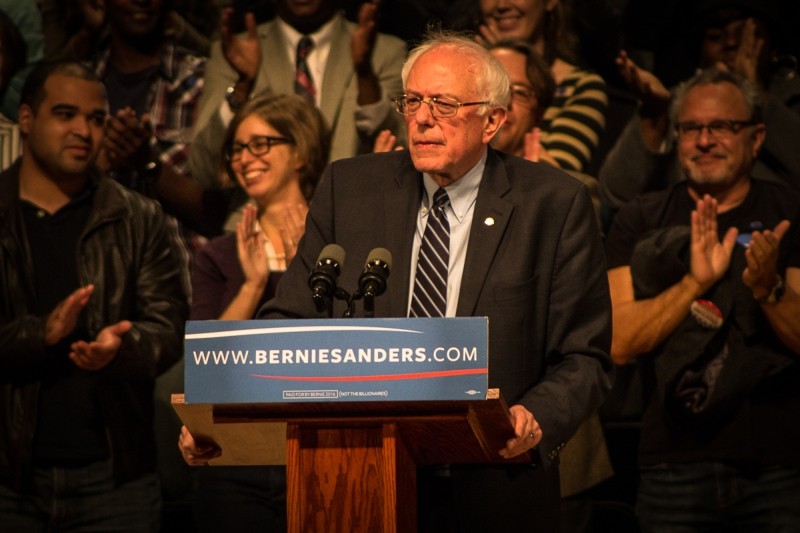 THE WAY people started lining up three hours early, you’d have thought some sexy rock star was about to show up and start handing out free candy.

In a way, that’s kinda true: Bernie Sanders has fast become the hottest superstar of the thinking class, even though he’s way more Woody Guthrie than Adam Levine.

He’s also promising to give America a whole lot more than a fun-size Snickers bar.

Still, who knew a 70-something Jewish grandpa could pack a house in southeast Georgia on three days’ notice?

The arrival of the Democratic presidential candidate set Facebook on fire last Thursday, and the RSVP’s mounted until it was obvious the original locale of Savannah Station wasn’t going to hold the blaze.

By the time the doors opened to the Johnny Mercer Theater opened Sunday evening, over 2,600 Savannahians had formed a queue that snaked around the entire perimeter of the Civic Center, and the last couple hundred didn’t even get inside. Guess we’re interested in politics around here after all?!

It was heartening as hell to see so many familiar faces and the usual social justice suspects but even better to not recognize practically everyone else. The diversity of our city was well-represented; black, white, Latino, children with their parents, college kids and retirees.

There were man buns and moustaches, cowboy boots and Birkenstocks, every stripe of society contributing to the friendly buzz.

The turnout was especially promising for the core group of about ten local supporters that have been maintaining a Facebook page and waving Bernie’s banner at the Forsyth Farmers Market on Saturday mornings for months.

“We’re really hoping this event will galvanize people to volunteer,” Savannah for Bernie organizer Alys Spillman told me as we waited to be ushered inside.

“More of us means we can take the next step and start canvassing door-to-door.”

The tenacity of this small-but-mighty platoon may well be what inspired Bernie’s campaign to finish his latest South Carolina sojourn in Savannah.

“We were in the front row in Charleston a few months ago and we begged him to come here,” shrugged Alys with a smile.

Last week Bernie was stumping again for February’s early primary in South Carolina, where he’s still trailing more than 2-to-1 behind Hillary Clinton in the polls.

That Hillary has probably already locked down the Democratic nomination in Georgia seems beside the point. Folks are already filling Atlanta’s Fox Theatre for Sanders’s appearance as this goes to print, and there’s little doubt that the South is Feeling The Bern.

After brief remarks from Mayor Edna Jackson (who received tepid applause and a few boos—so rude! Exercise your vote on Tuesday, not your mouth, m‘k?), Bernie’s dynamic spokeswoman Symone Sanders came out to rally for the only presidential candidate without a super PAC.

Then Bernie himself strode to the podium, rosy-cheeked and taller than expected, as the sound system blasted “Keep on Rockin’ in the Free World” (used with the blessing of Canadian Neil Young, who castigated Donald Trump when the Republican billionaire tried to use the same song for his campaign.)

With his unfashionable glasses and untidy fringe of white hair, Bernie’s hardly the Presidential type—unless your type is an experienced, wise man who’s real sick of the sinister bullshit dumped on the American people over the last two decades and is ready to speak truth as power.

“What we have is a rigged economy,” he railed over the cheers. “Enough is enough!”

For the next solid hour and half, the energy in room only increased as Bernie led us through his talking points:

The obscene imbalance of wealth in the richest country in the history of the world, America’s grotesque distinction of being the only first world country that doesn’t guarantee health care to its citizens, the need for reform in a criminal justice system that incarcerates more of its citizens than anywhere else (“disproportionately African American men”) and the hypocrisy of those who tout family values but won’t support paid leave for parents and caretakers (“It’s an embarrassment!”)

Also given gravitas were a woman’s right to control her own body, climate change (“Science should be the foundation of public policy!”), Islamic terrorism (“Its defeat must be led by the Muslim nations”) and university tuition funded by the same folks who were bailed out by our tax dollars.

“When Wall Street needed help it came to the middle class,” he admonished. “Now it’s Wall Street’s turn to pay.”

“It all seems so reasonable,” remarked Brighter Day owner Peter Brodhead about Bernie’s plan to leverage America’s capitalistic success back into investments in its education and infrastructure.

While Bernie’s opponents deride his Democratic socialism like it might grow a little Hitler nose caterpillar, many famously apathetic Millennials overwhelmingly approve of the platform’s populist sensibility. Bernie has pointed out to young Americans that single-payer health care, livable wages and higher education are basic rights in other countries, and they’re listening.

“He’s talking about things that actually matter,” said 16 year-old Savannah Arts sophomore Karsten Summerall. “I can’t even vote yet, but people my age are worried about paying for college without bankrupting our families.”

Now, I’ve heard plenty of folks comment that they like Bernie what has to say, but have decided he’s “unelectable” because his ideas are “too radical” and “crazy.”

Them naysayers ought to remember just how far the senator from Vermont has already come, how many years he toiled away in political obscurity, how he was dismissed as an outlier every time he voted against another war, ignored as he thundered against Alan Greenspan and the banks, scoffed at when he announced he was running for President and yet, yet, he continues to gain ground.

Besides, when compared to Ben Carson’s wacky Egyptian pyramid theory and Donald Trump’s bombastic xenophobia on the Republican side, Bernie’s proposals seem like the least insane ideas out there.

(Oh yeah, he’s also an advocate of mental health reform, including a shift to considering addiction as a social problem instead of a criminal one.)

But even if Bernie doesn’t push past Hillary this spring, and if we’re to believe the polls he probably won’t, he’s still sent a powerful message to those disenfranchised with the democratic process.

To me, the biggest quagmire of a Bernie Sanders presidency wouldn’t be how we’d pay for its promises or get Wall Street to comply. It’s finding the empathy for our fellow citizens and accepting the responsibility of our freedom—and to remember always that what makes America great isn’t its leaders or its celebrities or its riches—it’s us. It says so, right in the Constitution.

“One person gets one vote. That’s what democracy is about,” Bernie reminded before he left the stage.