Bert John lights it up

Show is also available by appointment through bertjohn.com.

“Lumen” showcases John’s new technique on Nov. 30 at 2901 Bull St., an expansive space that used to be a piano showroom.

John’s evolving style is attributable to a supply-and-demand mentality.

“I started this new way of painting in response to a show I previously had with larger pieces,” says John.

“I noticed the other artist had many smaller works selling and being taken out the same night. While I was successful in my own right during this show, I thought, ‘Why shouldn’t I capture a larger audience as well?’

“So the next day, I figured out a technique of painting that I could do that would translate to smaller canvases. The way I was painting at the time didn’t work well on small pieces.” 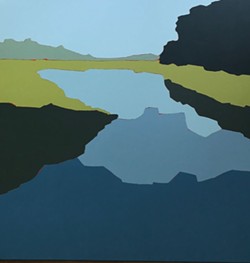 John’s work is almost geometric in approach. He works from a photograph of the landscape, blocks off each part, and paints each section.

“This style is more of a color-blocked mid-century feel and translates well,” John explains.

“It also gave me an opportunity to use more saturated tones and a wider variety of colors.”

This body of work has been a few months in the making, and John has made it more his own along the way.

“Now that I have had a few months painting this way, of course, I take liberties and don’t stay in between the lines perfectly,” says John. 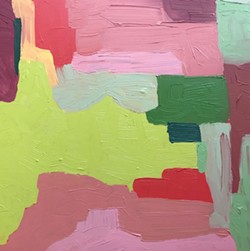 “Nature has become an inspiration in every sense of the word—first a literal translation and now more of an abstracted one.”

The reasoning behind the name of the show plays into the way John paints.

“The name of the show is ‘Lumen,’ loosely translated, meaning light,” says John. “I’ve tried to incorporate brighter and more intense saturation in this palette.”

Overall, the new style is working great for John.

“My brain doesn’t typically think in the abstract, given my science and medical background,” says John.

“I take photos of marshes and landscapes ad use the lines and geometry I see in these photos to create my compositions. I’ve learned to throw in a handful of completely abstract pieces along the way.” 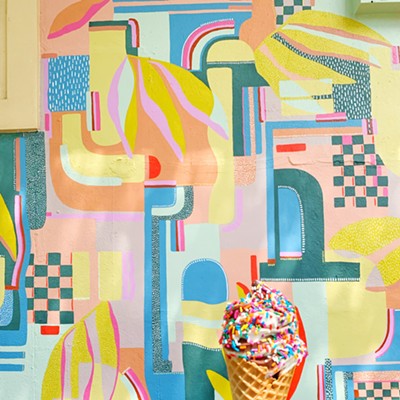