Bess Chappas: ‘Everything you write is something you know’ 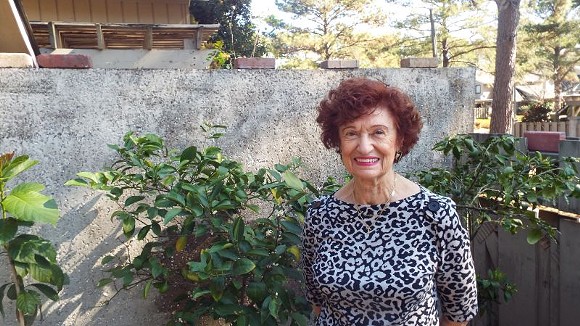 SAVANNAH WRITER Bess Chappas likes her old things. She’s filled her house, a small condo with patio garden on Mall Blvd., with collectables from her many excursions.

“I used to do a lot of traveling,” she says, pointing out vases, paintings and chairs from all around the world. “I used to say, ‘Give me three minutes to pack and I’ll go anywhere.’”

Why chuck the stuff, she reasons, when they hold fond memories? When a visitor called her home “quaint,” she didn’t know if she should take it as an insult or a compliment.

“I just like the things that make me comfortable,” she says. “My husband used to say that he liked that I was fond of old things because, that way, I’d never get rid of him.”

The retired elementary school media specialist and former newspaper columnist’s furnishings are a good introduction to her newest book, an old-fashioned romance.

The self-published Wrath of Aphrodite doesn’t pretend to be anything it isn’t. There’s a love story, some paranormal activity and an optimistic, emotionally-satisfying ending.

“I wanted to write something about Savannah,” she says. “I read mysteries, romance, historical novels, everything. I just wondered if I could write one just to see if I could.”

The book started as a short story centered around a bad guy. But then she got to liking the character. So she softened him with a woman and gussied up the script with other souls.

Her writing group at Senior Citizens, Inc. helped her tweak the text. But she wouldn’t go as far as using the “formula” suggested by one of the venerable organization’s speakers.

“I want to write spontaneously,” Chappas says. “It was like flowing down a river. It just came. That’s the way I write anything. But it was a big jump from children’s books.”

Her two previous publications, the illustrated-for-kids Kiki and the Red Shoes and Kiki and the Statue of Liberty, tell the story of how she came to the U.S. from Greece at age six.

And in many ways, The Wrath of Aphrodite continues her lifelong role as a woman on a mission to tell a Greek émigré’s story. Take the setting. It takes place in 1976 Savannah.

“I had to pick a time when Pinkie was still alive,” she says, referring to the Greek bar founder, Pinkie Masterpoulis, a.k.a Pinkie Masters. “He died a few years later.”

The only “real” character in the book, Masterpoulis serves as the protagonist’s godfather, a guardian angel who gets the book’s main character to Savannah and later saves his butt.

“It wasn’t difficult because I knew him,” Chappas says. “I could talk about things he did, the way he looked, the way he continuously smoked that cigarette and never took it out.”

Fictionalizing an actual dead man with living relatives takes guts. But her friendly tribute honors his life. She also had no idea his bar would close shortly after her book came out.

“It’s just another beautiful thing about Savannah that’s gone,” she says. “Those of us who have been here for so long, you hate to see the old and wonderful things disappear.”

Other Greek subjects pervade the book. A ghostly statue of Aphrodite, goddess of love, comes to Savannah, by way of pirates, from the New Smyrna settlement, a historical fact. And Chappas based several characters on what she describes as typical Greek-American stereotypes. That includes a set of old-fashioned parents. The author’s parents? Herself?

“Everything you write is something you know,” she says, as mysteriously as she writes about supernatural powers. “It all goes in your head and you pull it out when you write.”