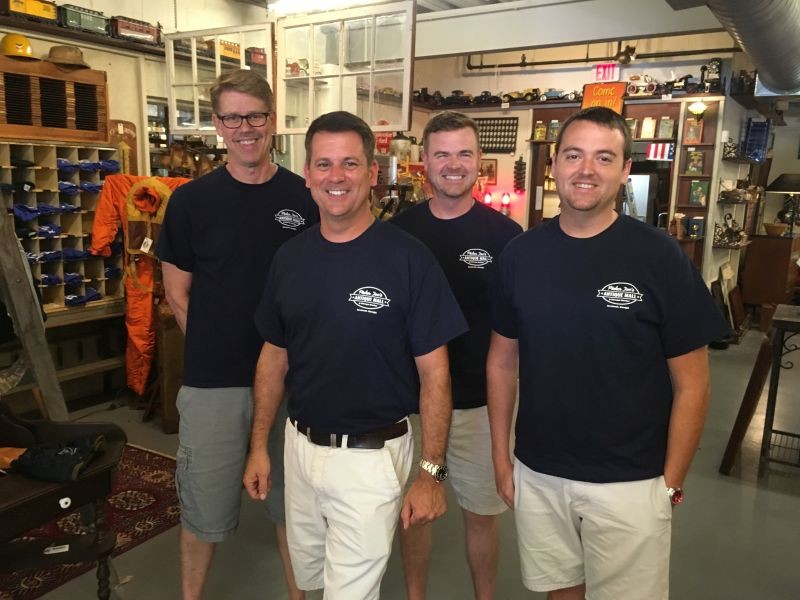 Jim Plumlee has what he calls “PFTP”—Passion for the Past.

The proprietor of Picker Joe’s—it’s not “Picker Jim’s” because there’s already a Peddler Jim’s in town, he says, but Joe is in fact the name of his dog—was motivated to get into the antique business after a career as a pilot.

“I had been there, done that, been in an airplane accident, and was finally ready to just follow my passion and do what I’ve always wanted to do,” says Plumlee.

With nary a gray hair on his head, Plumlee is a good bit younger than the usual antiques store proprietor. He and his dedicated young staff bring a youthful spirit to this growing business in the Starland area—including an in-house IT and social media department.

They say they “especially needed that social media push the first year, since we’re off on a side street. But word has really spread.”

Now in its second full year of operation, Picker Joe’s is in a former mattress factory.

“It had been vacant for 28 years before we got in here. We literally fixed everything up ourselves,” Plumlee says of the vast space on East 41st Street.

Unlike the dusty, unkempt antiques stores you might be familiar with, Picker Joe’s is clean and squared away. The shelves are filled with legitimate vintage items, not mere bric-a-brac.

That said, Plumlee makes it clear that “this is a business, not a museum. We want these items to end up in the right hands, to constantly be moving around as we sell them and replace them with more things.”

Much of the store is devoted to consignment booths. “The thing is, people tend to focus on one area that’s really important to them,” Plumlee says. “But we want a wide range of offerings for people. So it’s really important to us to feature a diversity of vendor booths here, to give people a lot of different areas and styles to choose from, depending on their own interest.”

Plumlee’s aviation background has enabled him to network with sources dealing in extensive military and aviation memorabilia. But of special interest, both to him and to Savannah in particular, is the room dedicated to architectural features, ornaments, and fixtures.

“I really love the stories behind old buildings, and the stories of the people who once lived and worked in them,” says Plumlee. “One of my favorite things about this business is finding new and interesting things from old buildings and making them available for others to enjoy.”

You might see the black Picker Joe’s mini-van plying around town. It looks a lot like the vehicle used on the American Pickers TV show.

In fact, Plumlee says, sometimes it works out that way.

“Sometimes, just like in the show, I’ll get a call from somebody saying, ‘There’s a whole barn full of stuff that some guy is ready to part with.’” —Jim Morekis