“In order to survive in this town, you have to constantly have shows,” co-founder Jennifer Moss says.

However, the studio’s founders—Moss, Emily Earl, and AJ Perez—don’t just hang art on the walls and call it a day. They also lease out studios, host workshops and classes, put on all-ages shows and offer professional art installation through the new Sulfur Art Services.

“We’ve been trying to keep the momentum going and stay really busy. I guess that’s what keeps us in people’s minds,” says Earl. “There’s always something every weekend.”

That’s no understatement, especially since this late spring stretch is Savannah’s busiest time for exhibitions. The team still doesn’t slack, though, when they’re going through their slow season, which is usually fall.

“What are our slow times, our busy times, what’s the rhythm of the city?” Earl asks. “When are people really excited about doing things and when are they hibernating and working? When people are not showing as much, we still have to show stuff.”

All artists, Earl, Perez and Moss met while they were working at the Sentient Bean and were friends long before they were business partners. Moss had her eye on a space that she thought would be good for a studio, so she rented it out herself and told her friends about it.

“I had multiple times where we’d be hanging out at night saying this thing needs to happen and then it was just like, you know what? Let’s make it happen,” Moss recalls.

Another key to success is their common artistic values.

“We all have our influences but we also share a very similar aesthetic and eye for what looks good, what’s quality,” Perez explains.

For a space that prioritizes diversity as much as Sulfur, though, the selection process goes beyond what looks good. The owners themselves present a variety of media—Earl photography, Perez painting and music, Moss fibers—which furthers their mission of diversity.

“Some galleries are very specific interest, and that’s great,” Earl says. “We’re just kind of on the flip side of that. We’re interested in everything, and variety is important.”

“It reflects the space as a whole,” Perez adds. “You have so many different types of artists and creatives in each studio, so to me, it would be weird if we have this diverse body of artists but we were always doing one kind of show. It wouldn’t really work.” —Rachael Flora 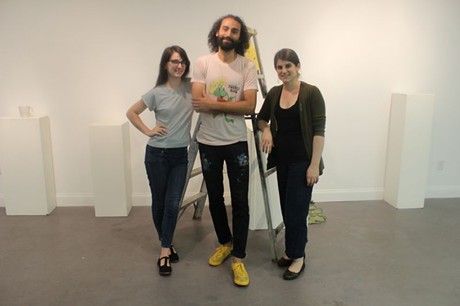