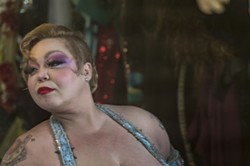 Onstage or off, Rita D’LaVane knows how to command a room.

As founder and producer of the Savannah Sweet Tease Burlesque Revue, Rita’s been on many of the city’s stages, performing shows for a packed house of adoring fans—or, lately, to a camera.

But you’d never know, just from looking at them, that they suffer from stage anxiety.

“A lot of people don’t know that,” they say.

In fact, Rita originally was interested more in producing than performing. After their first dance in 2004, Rita learned the ropes of the burly business from Jean Thompson, who ran Lucky Doll. Then Rita began the Sweet Tease in 2013, where they preferred to be behind the scenes.

“A lot of that had to do with the fact that I wasn’t confident with my shape yet,” they confide. “I wasn’t comfortable being on stage. When you’re in front of a bunch of people like that, and under lights? That can be really unnerving. But I just told myself, ‘My shape also needs representation.’”

Representation, in fact, is something Rita has been passionate about from day one.

“I pass as a white person, but I have the understanding and experience of what it’s like to be a person of color because I was raised around my culture,” they explain, “so I also use that as a way to make sure there’s representation of black and brown bodies on stage as well.”

Through their success, Rita is able to empower other burlesque dancers, particularly those who haven’t always been represented on stage. And Rita has certainly had success over their career of nearly two decades. Among other accolades, Rita counts a proud moment as being crowned the Duchess of Funk at the What the Funk?! An All POC Burlesque Fest.

“It’s not that I want to snatch up all the titles I possibly can,” explains Rita. “It’s elevating my own platform as a performer, as well as what I’m like as a person. Using that to open more doors for other people is what made me make the decision to compete.”

In just seven years, the Savannah Sweet Tease Burlesque Revue has grown to be a powerhouse of a burlesque troupe. They’ve swept four categories in this year’s contest, with Rita bringing home two of their own.

Ultimately, one of the biggest things Rita did was to believe in their own power and talent.

“Believing in yourself is a good percentage of the work,” they say. “If you don’t believe in what you’re doing, then how is it you’re going to follow through with anything?”