"I think the Islands really needed a place like this," Mir muses, "a place where people don't have to go downtown or to Tybee and isn't too much money."

Indeed, the selection at Lili's is diverse enough to accommodate any diner. The entrees are simple enough—pork chops, seafood stew, salads—but it's the accompanying flavors that make the dishes pop, like wasabi-ponzu, roasted eggplant caponata and green tomato chow-chow.

Their brunch menu also stands out from the typical biscuits-and-gravy fare: shrimp and adluh grits, tandoori-spiced chicken and waffles, and barbecue beef brisket hash are served alongside omelettes and burgers.

Though the menu items sound exotic and fancy, Lili's is anything but uptight.

"We're not too pretentious; we have a creative, inviting environment. All those little factors created a buzz," Mir says.

Most buzzworthy item on the menu? Mir points to the seared lamb chops, served with a shirazi salad and cilantro-yogurt chutney.

He also notes the unique flavor of the curry spiced crab and shrimp cakes, served with lemon-saffron aioli.

But even with increased recognition of their bang-up food, Mir and his wife are keeping level heads.

"My wife and I don't like to toot our own horns," says Mir. "We just love what we do and want to share it with the community." —Rachael Flora 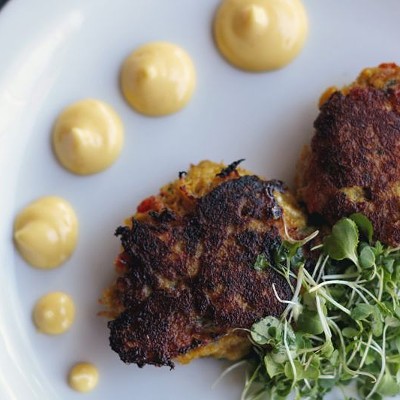