This might be a first time win for Zia in this category, but that just means we're finally catching up with the rest of the world's obsession with his jewelry.

His striking designs have been featured in Vogue, Ebony and other glossy magazines adorning stars and supermodels, and pair of his chunky earrings made a stunning appearance on an episode of "Gossip Girl." Celebrity stylists go mad for his African-influenced Kalahari collection, featured last year at the Telfair Fashion Show. 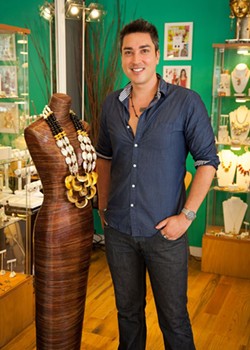 The Kenyan-born Zia has been bringing global style to the corner of Broughton and Montgomery for 11 years via his eponymous boutique, where he started out showcasing the jewelry of others. But after a couple of years, an urge emerged to bring his own visions to the napes and earlobes of his clients.

"I couldn't find what I wanted to sell at the trade shows, so I began creating my own designs," says the artistic entrepreneur.

That quickly led to a wholesale venture that at its peak supplied his beautiful bangles, necklaces and earrings to 400 stores in seven countries, though these days he has dialed back to offering them exclusively at his elegant Savannah shop and on his website.

"I was always out of the country, and while that was wonderful, it became exhausting after a while," laments Zia, who recently renovated an exquisite townhome on Calhoun Square with his partner, Eli Hale.

Domestic bliss hasn't slowed down his productivity, and Zia continues to conceive unique accessories for the fashion forward. His crazy sexy body chains complement formal dresses or bikinis, and the long strands of beads and pearls he calls "modern rosaries" are statements unto themselves.

Combining fanciful stones like cinnabar and gaspeite, a lime green carbonate from Australia, with delicate sculptures of gold and sterling silver, his nature-inspired pieces reflect his international upbringing and jet-setting travels.

"I love tropical places, anywhere hot where the food is spicy and the foliage is really lush," he says, holding up a necklace of sea foam stones that evokes the movement of a cascading waterfall.

He describes a recent trip to Bali, where he sat on a hillside studying the swaying of the grass in the breeze for hours with his sketchbook.

"The natural world is so mesmerizing," says Zia.

"I want to capture that movement and curvature." —Jessica Leigh Lebos