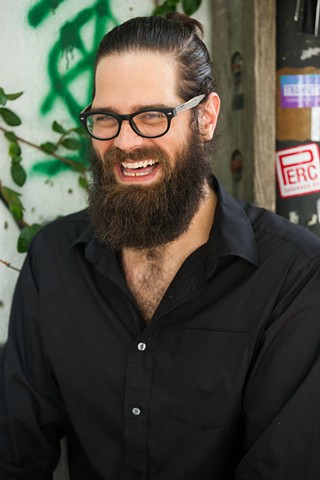 Since its founding, Savannah Stage Company has prioritized imagination and bravery, made theatre accessible with their pay-what-you-can policy, and engaged audiences of all ages with action-driven storytelling. With minimal props and a lot of heart, the exciting troupe continues to captivate new fans.

“Wesley getting Best Actor of 2017, that comes with a lot of weight,” says Best Local Theatre Director Jayme Tinti. “We don’t take it lightly. Especially for Wesley...it became, ‘What are you not good at? How can you get better at that?” Since the win, he’s directed an entire play by himself [It’s A Wonderful Life], which was huge to be on the other side of the table, and he was choreographer for Working, and he had never choreographed anything. We’re really trying to push in those areas.”

Best Actress Ashley Cooke found new ways to challenge herself, working as the company’s Administrator and in the education department.

“She’s the one who booked all those shows, reaching out to schools, nursing homes, and scheduling,” says Tinti.

SSC has gained a reputation for delivering a stellar show in any environment, and Best Theatre Production The Call of the Wild, performed in Forsyth Park, is a perfect example.

“We weren’t sure what was going to happen,” Tinti remembers. “We’ve done Shakespeare in the Park, but everyone knows Shakespeare. We got going, and you could just see hoardes of people coming from every direction with dogs and kids. It was so nice to be able to bring that experience to people, especially the kids, but even adults too. For a show to win that was seen by so many people in a nontraditional way feels really nice, and it makes me feel like we’re doing what we set out to do: make theater as accessible as possible.”

“Casting actual, real-life children is really new for us,” says Tinti. “They have been coming to our company workshops since February...they are the two most invested, mature and thoughtful kids I’ve ever met, and I’m so proud of them. Every month when they come in, they’re there with grownups, in our world—this isn’t children’s theatre. Seeing them in our grownup world is mind-blowing. I’m so excited to do a play with them.”

The company also plans to extend its education and outreach, continuing to grow and touch the lives of countless Savannahians through imagination and bravery.

“Thanks everyone who voted for us,” Tinti says. “We worked very hard to live up to it last year, and hold your horses: we’re coming for you this year!’ — Anna Chandler