Suzanne Nelson admits that she doesn’t bring quite the push that some heftier players bring to one of Savannah’s more rough and tumble sports.

But when the Derby Devil, a.k.a. Goldiknocks, fills her role as the team’s lead skater and point-scorer —the jammer —she brings a flitting and bouncy style that helps her team win bouts. 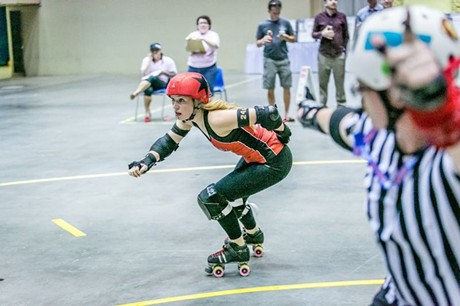 “I don’t weigh a whole lot,” she says, comparing herself to her opponents. “But I can sure skittle around them.” A Houdini on skates.

Part of this sport’s appeal is watching players push each other, leading to all types of falls: Front falls, back falls, lingering falls, falls that hurt just thinking about them.

So what’s roller derby’s appeal for Goldiknocks, the one taking the falls? “It’s being a girl and playing with other girls that you can hit with every ounce of your strength and they tell you ‘Good job,’” she says. “It’s aggressive but it’s not malicious.”

It’s also a family. I remember when roller derby started in Savannah 12 years ago. Back then, players had names like Demon Child, Evilyn Twisted, Fear Abbey and Sue Legit. Today, they include Eenie Meanie, Catatonic Crush and Skates of Wrath. The last two Derby Devils to win Best Athlete were Hello Kidney in 2016 and Felony Melony in 2013.

In between, so many have passed through this sisterhood – and its clans-in-pain, the Hostess City Hellions (“B Team”) and Savannah Derbytaunts (youth team) – that I dare say there’s now a dynasty of determined Devils supporting each other through thick and thin.

“If anything goes wrong in your life, you have at least ten people who are looking after you,” Goldiknocks says. “I love the sport too much to stop.”

Even after a crushed bone in her foot! She says the injury doesn’t make her much more than just a little bit sore. She’s playing on it now, incredibly.

“It’s not a really long-lasting sport for jammers because your body can’t take it for that long,” she says. “It’s definitely taxing on the body.”

This is her fifth season with the Devils. She got interested in the sport after watching the inspirational 2009 movie “Whip It,” starring Ellen Page as a Texas teen who joins the roller derby.

So the next time you Devil – and their exciting season runs through October – look for our winner in her signature gold color, sporting a triangle on her helmet. Her jams will knock you out! – Orlando Montoya