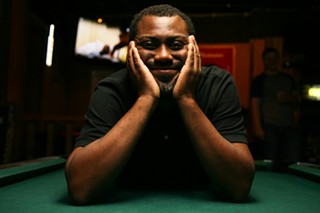 Wander down Bay Street on a Thursday night, and you’ll encounter a uniquely Savannah experience. As you pass the towering Corinthian columns of the U.S. Customs and Border Protection building, the sounds of a searing electric guitar punctuate the balmy evening. Behind the neon hiss of Bay Street Blues’s window, you’ll find the guitar-slinging, endlessly entertaining Brett Barnard, a.k.a. Hitman, and his band.

Inspired by the stylings of the blues greats like Freddie King and Buddy Guy and bathed in the fire of guitar gods like Jimi Hendrix, Eric Clapton, and Stevie Ray Vaughn, Brett Barnard and the Hitman Blues Band offer the thrilling sounds of American music tradition in their arrangements. With bass, drums, and even a little harmonica, the group may rotate players from time to time, but the song remains the same: if you’re ready to party Savannah-style, you better find out where the Hitman’s gigging.

Brett Barnard and The Hitman Blues Band’s regular gigs include Bay Street Blues on Wednesdays and Thursdays, and a weekly Tuesday night show at The Warehouse on River Street (go ahead, brave the tourists for cold, cheap beers and great music). You can also find the band at the Bayou Café, Molly MacPherson’s, and beyond. Keep an eye on Connect Savannah’s Soundboard to find their next show. Raise a shot to the Best Local Funk/R&B/Soul Group—and order the band a round of Jäger while you’re at it. — Anna Chandler