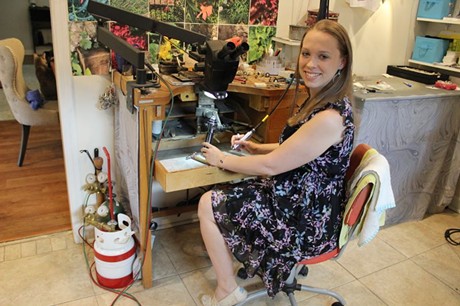 Kristen Baird’s career trajectory is the epitome of a slow build.

She started out as an interior design and architecture major at SCAD, but she didn’t know how that would play out.

“I tried one jewelry class and fell in love,” remembers Baird. “I knew it was the way. I knew I could make a career that I wanted out of it.”

“In 2015, I jumped in headfirst,” remembers Baird. “It was so scary! It was good, though, because I had taken the time to really think about it. And it was costing me money to work those part-time jobs because I was missing out on money for my own business. It was when the scales tipped to where it was more profitable to work for myself, which I never thought would happen, and now it is.”

Baird admits that running a business can be tricky, but it’s also so rewarding.

“It’s different because I could probably work 40 hours a week, but I work 60 or 80 because I’m working for myself,” says Baird. “It’s fulfilling and I’m seeing the rewards of the hard work. It’s nice to see people are paying attention. People know who I am, which we’ve been building that for years.”

Baird’s dedicated client base loves her for her approachability and relatability.

“A lot of my female customers are self-purchasers because they’re like, ‘I want to buy this for myself because I deserve it,’” says Baird. “They don’t want to go to a jewelry store where it’s a bunch of guys and it’s dark wood or a very masculine feel. I can come meet you at a coffee shop and we can talk about jewelry. If you’re a size 13 finger, fine! I’m not going to judge you. I’ve done sizes 3 to 15. We can make it work.”

In designing, Baird is inspired by our coastal community.

“Pearls, oyster-type things, lots of water, lots of rippling, waves and oceans,” she says. “I’m inspired a lot by that, but also the architecture and interior design background comes back in, so sometimes you’ll see some structure, very geometric. It’s a little raw, but super feminine. Kind of structural, but still organic—a very fusion-y thing going on.”

That fusion can especially be seen in Baird’s rings, with rippling bands but intricately-set stones. Rings also happen to be her favorite pieces to design.

“They’re just so unique and different and one of a kind,” raves Baird. “People have ten fingers, so they can stack them and play with them. They’re the most playful piece. But I do really enjoy cuff bracelets as well—cuffs are really fun.”

This is a big year for Baird. She’s expanding with some new galleries, including Palmetto Bluff, and her first baby is due in the fall, right as the holiday season kicks off.

“It’s going to be fun. With the baby, it’s going to be interesting,” says Baird. “It gives us a little extra motivation, you know? Because now we’re doing it for somebody else.” – Rachael Flora