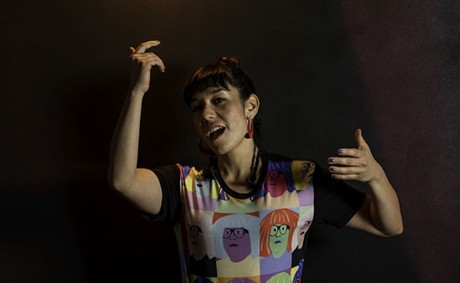 Bero Bero, comprised of Veronica Garcia-Melendez and David Murray, turned some heads earlier this year with the release of the video for their single, “Symbiosis.” The lyrical concept for the song was actually inspired by Danny Devito’s character in an episode of It’s Always Sunny in Philadelphia, in which he pretends to be an art collector named Ongo Gablogian.

“There’s a scene where he’s talking about a piece of art that’s actually an air conditioner. He says, ‘I love it! It’s everything - it’s symbiotic. I want it!’ I started thinking about the idea of symbiosis - two organisms building off of each other,” Melendez says.

Musically, the song took shape earlier and the lyrics were written around a small melodic concept.

“The music started with an idea that that David had sitting in the backyard late one night,” Melendez says. “He started hearing a little melody in the drone of the air conditioner. He brought it to me, and I built the rest out of that.”

The video was naturally an extension of the lyrical concept, with Melendez explaining that it involves two people searching for each other and trying to find a symbiotic relationship. The duo enlisted the help of talented friends in the world of film and video to help with the striking imagery, drone shots, choreography, and fashion to create a video that feels similar to some of Kate Bush’s notable videos of the 80s.

The video for “Symbiosis” is one that serves as the perfect visual compliment to a dynamic song, and hopefully serves as just the beginning for Bero Bero in terms of using visuals to elevate their art. – Sean Kelly