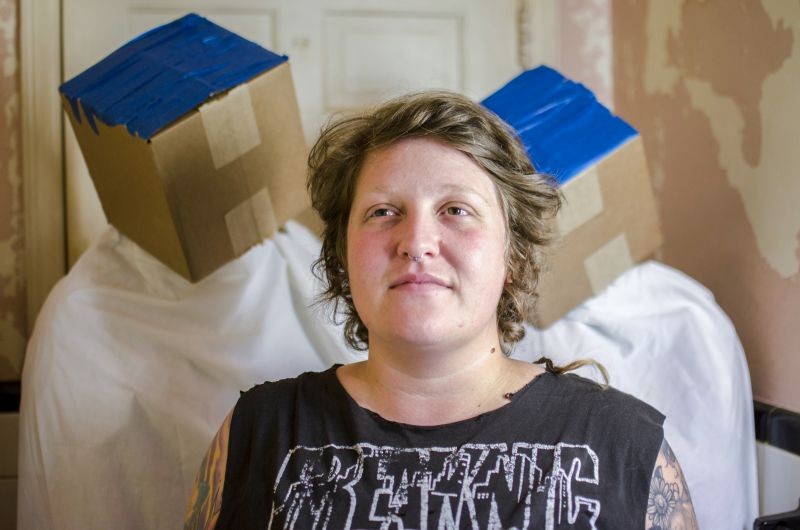 The first time Greta Odrezin was onstage, she was terrified and shaking. Headlining a show with Mannequin Pussy, Don Vito, and Jealousy Mountain Du0 at Hang Fire, the vocalist brought her journal of lyrics onstage and hollered into the microphone as a masked guitarist and drummer surrounded her in noise.

Greta O. & The TOXIC SHOCK started out as an experiment of sorts and grew into one of Savannah’s most-loved bands, delivering raucous performances and a fevered demo recording. It’s Odrezin’s first band, and the singer has honed a captivating stage presence over three years. The audience is completely engaged while the centrifugal force of her masked bandmates declares: It’s Greta O’s world. We’re lucky to bear witness.

“I went to a Jewish school from kindergarten to eighth grade,” she says, “and I was listening to what my parents listened to—lots of old country, Led Zeppelin. Hearing something so different...that energy and passion made sense to me. The fast-pace, high energy, that’s what I’ve always been drawn to, music-wise.”

For years, she was dying to be in a band and already had a name picked out: Toxic Shock Syndrome. Friend Josh Sterno of the band Cray Bags wanted to start a new project and implored Odrezin to sing. To make it even, Sterno volunteered to learn and play guitar.

“He had to do something he wasn’t normally used to, too,” Odrezin grins.

For some time, Toxic Shock was a trio with Odrezin singing, Sterno playing guitar, and Cray Bags’ Daniel Brady Lynch drumming. Sterno ran his guitar through a pedal that would beef up the lower end and compensate for the lack of bass, but eventually, Cray Bags’ Derek Lynch took over bass duties. While on tour with Cray Bags, Zak Barnum played synthesizers, something that Odrezin hopes will happen again in the future.

“It’s been so cool to see what we’re all capable of doing together,” she says. “I think the growth in sound has been really nice from the beginning to now.”

Early on, Odrezin sang her old journal entries; lately, she’s enjoyed bringing a irreverent playfulness to her lyrics with stories of debauchery and partying escapades.

“Not everything has to be so serious,” she says. “We might as well have fun.”

These days, Odrezin is right at home onstage and enjoys exploring other aspects of performance, including playing bass in punk band Sherman’s Boot before its hiatus.

“I’m kind of a shy, reserved person,” she shares. “It took a lot for me to put myself at the forefront. The dudes pushed me to the front, and with the masks, it was a lot to take on at first.”

It’s hard to believe that three years have passed since that first gig.

“[Singing] has helped me gain a lot more confidence in myself,” says Odrezin. “Being scared or nervous doesn’t stop me from doing anything now. I say, ‘Fuck it, what’s it going to hurt to try?’”

Drummer Daniel has plans to move to Chicago next month; before he does, the band will record their first full album. Odrezin is determined to keep the project going and hopes to tour out west soon.

The band was surprised by this first-time win and Odrezin looks forward to taking the project as far as she can.

“It’s a good way to end this chapter of it,” she smiles. —Anna Chandler