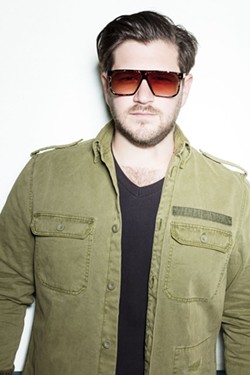 For most of his life, Isaac Smith’s distinctive voice was a part of a joyful unison reverberating through the halls of his father’s church. Though he played multiple instruments in praise bands and even worked as an in-demand session player, the 31-year-old didn’t write an original song until 2013. Now, Smith has honed a unique acoustic, indie-folk influenced sound and captured audiences with his engaging storytelling through song.

“Music, for me, has always been church,” Smith explains, recalling those early days in his hometown of Atlanta. It was in a worship setting that he learned the drums, then bass, and, eventually, violin, which he learned at school and incorporated into his church playing.

“Violin for me is the one instrument I’m fairly good at,” he shares. “In the worship world, I started doing stuff with random artists, from Hillsong United to Jeff Deyo, and I did a lot of studio work in Atlanta. That was great. The money was cool. That was a good thing.”

But Smith wanted more. When he moved to Savannah and his church asked him to pen some original praise songs, he was inspired to dig a little deeper.

“[Praise songs] are usually a lot of mountains and trees and valleys, and I wanted to be more detailed with songwriting,” he says. “That’s not necessarily worship for a lot of people.”

“That was my first introduction to the scene in Savannah,” he remembers.

He went home, sat down with an acoustic guitar, and wrote. The song that came out, “Give In,” was inspired by friend Eric Dunn of Velvet Caravan. Like many local artists, Smith headed back to Molly’s open mic to play the song and get some feedback from host Craig Tanner.

“I look up to Craig tremendously,” Smith says. “I feel like he’s the best songwriter...playing songs in front of him, I wasn’t nervous or scared, buy it was like, ‘Let’s see what he says about it and get some honest input.’”

The song is included on Smith’s first release, 2014’s “Magnolia Bloom” EP. That recording showcased the incredible chemistry that the singer-songwriter has with his band, drummer Robert Saunders, guitarist Stewart, and, now, bassist Eric Dunn.

“Robert and Ethan come from a very similar church background as me,” Smith says. “I can hold my own with solo stuff, but when they come together with me, it’s my family just killing it. They’re amazing and make the music ten times better than what it is.”

Currently, Smith and his band are in pre-production for a full-length album, Young or Old, recorded at The Garage Savannah; Smith’s running a Kickstarter for vinyl pre-orders of the LP.

The single, which fans can hear in June, is inspired by the early days when Smith and his wife, jewelry designer Tatiana Cabral Smith, were getting to know each other.

“I get reminded a lot in my marriage about the times we used to talk on the phone for hours and hours and it felt like ten minutes,” he says. “Sometimes, when we’re sitting on the couch or listening to records, it’s really hard to think beyond the years where we started together. And I just think to myself, ‘What did I do before I met this girl? Were the skies as blue?’ The record is about love, about conquering hardships and embracing who you are within your marriage or relationship, and no matter young or old, where we find ourselves, our hearts still beat for each other’s souls.”

Smith hopes to release the album in late summer and is gracious for the support of Connect Savannah voters.

“Continue to support local music and the hard workers of Savannah,” he says with earnest. “Be kind, be real, be you.” — Anna Chandler

Speaking of Best Of Savannah 2017

Most Important Local News Story of the Past Year