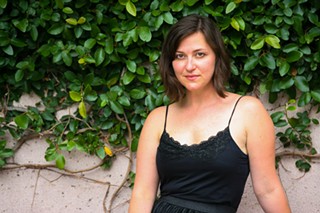 From the honky-tonk to the theatre stage, Best Local Vocalist Lexi Balaoing knows how to capture an audience. A child of small-town Florida, Balaoing grew up singing at her great-uncle’s country music revue.

“I was the quintessential girl in the puffy skirt singing Patsy Cline when I was little,” she shares over tea at Foxy Loxy. “I have a very musical family...my mom has a beautiful voice and she’s always encouraged me and taught me to love the arts.”

As a kid, Balaoing was known as “The Human Jukebox,” always ready to sing along to every word of practically any song. Throughout childhood and young adulthood, she wanted to be a professional singer, and was particularly moved by the breakout of LeAnn Rimes.

“‘Blue’ came out when she was 13 or 14 years old,” Balaoing marvels. “I remember being like, ‘Whoa!’ That was a special time for country music...I really think LeAnn Rimes started the whole young girl popular music superstar thing...that hadn’t been a thing for a very long time.”

Witnessing Rimes’s deep dedication made Balaoing rethink music as a career, and she set her sights on theatre, attending Florida State and rooming with musical theatre majors.

“I got a taste of what it takes,” she says. “I sang here and there on the side and always got opportunities to do it in theatre, but it wasn’t until I moved to Savannah that I started doing it a lot and playing live shows.”

Balaoing’s first Savannah job at The Andaz introduced her to Corey Hines, the singer-songwriter behind the project Black Water Choir. Hines overheard Balaoing as she buzzed about the hotel lobby, singing all the way, and invited her to sing with him.

“I was super-nervous the first time I went over,” she recalls of their initial practice.

“I never took to a musical instrument so strongly, and I think that’s why I didn’t spend a lot of time on my own music,” she says. “Working with Corey totally lit a fire under me, and we started writing music together. Writing songs...that sort of just blossomed into a new opportunity for me.”

Singing with Hines led to singing with songwriter Isaac Smith, which has been a transformative experience for Balaoing.

“Corey lit the romantic side of my feelings about singing and opened up my emotions toward it,” she explains. “Isaac taught me to be a better singer. He’s an amazing musician with an incredible voice.”

Outside of her collaborations with Smith, Balaoing is busy with Savannah Stage Company, where she serves as Director of Education and acts, choreographs, directs, and more. She also can be found singing solo at weddings and special events, and recently teamed up with bluegrass band City Hotel.

Balaoing is drawn to soulful grooves and blues, and listeners will soon hear those elements in her own music.

“I’ve developed a little more of a sultry quality,” she explains. “That’s what I like in music and how I sing myself.”

Next, audiences can catch Balaoing in the lead role of Cabaret as Sally Bowles. It’s a big challenge taking on the role that Liza Minelli made famous, but it’s a challenge that the vocalist is ready for, especially since it’s her first lead role in some time.

“It’s going to be a big challenge, but that’s a big highlight,” she says. “I’m still learning my way, but I think it’s awesome to be a part of [Best of Savannah].” — Anna Chandler