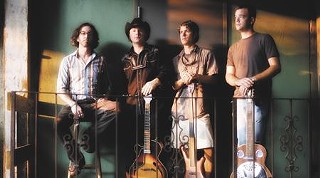 And it just keeps getting better. This year’s 18-day event posted a 14 percent increase in ticket sales over 2008, topping $1 million for the first time. Recession? What recession?

SCAD’s 11th annual celluloid celebration gave us early screenings of – among others – The Wrestler, Happy-Go-Lucky, Waltz With Bashir and I’ve Loved You So Long, and brought Malcolm McDowell to town for a Lifetime Achievement Award. How cool is that?

Runner-up: Shakespeare in the Park

Every Wednesday, it’s the freakiest and the funkiest, as the Psychotronic Film Festival unreels the kind of offbeat stuff you just can’t rent down at Blockbuster.

Stadium seating, reliable air conditioning, hot buttered popcorn and all the latest Hollywood hits. What’s not to like?

Savannah Shakespeare Festival director JinHi Soucy Rand brought local theater and spoken word companies together for sonnets, songs and soliloquies by – and inspired by – the Bard of Avon.

This student in the Armstrong Atlantic State University theatre program has made quite an impact on local theatre for one so young, both as an actor and as a director. We had a quick e-mail exchange with him.

What's the biggest difference between acting and directing for you?

Ben: The biggest difference is in perspective. A good actor has complete awareness of their character’s role within the ‘world ’ of the play. The director’s responsibility is to guide the choices of the actors, but at the same time work to insure that all of the performances and choices remain true to the author’s original intent. To direct, one must be able to view the work from afar as well as be able to pinpoint most minute details.

Ben: My family, whom at the age of 4 I would charge to view ‘staged ’ performances with action figures in my bedroom, would say I have always been a director. I think the best directors are the people who started as actors. I’ve learned more about directing as an actor than when I’ve actually been at the helm of a production. When offered an opportunity to act with a director or cast that I enjoy, I’ll always jump on it. But, directing is where I currently feel most satisfied.

What's your favorite show so far? Not necessarily the best, but the one that was most enjoyable for you.

Ben: I’m a three time veteran of Fiddler on the Roof. I’m not sure why this Methodist from Sandersville, Ga., is so moved by the piece, but it resonates with me like no other. I’ve performed it with professionals and with high schoolers. And, no matter the venue, the show brings me something fresh and new each time.

What has the AASU theatre program meant for you personally?

Ben: The AASU theatre department has given me more creative freedom than anywhere else I could have chosen. No where else could I have had the opportunity to learn and grow on stage as I did for the past four years. At AASU, I was also taught the importance of being resourceful; an excellent lesson for anyone going into the world with a degree in theatre!

In 2008, she was Mama in the drama A Midnight Cry: The Underground Railroad to Freedom, then stole the show as a strutting Rizzo in Grease. She just finished a run as the mesmerizing Leading Player in Pippin. What can’t this talented young lady do?

The Bee in Bonnie Bondelle’s Bow, with colorful illustrations by Aija Jasuna, is the first book by the Savannah-based children’s author, a freelance marketing and design consultant.

Designed by famed British architect William Jay, the Telfair family home opened as an art museum and school in 1886, and there’s been a steady stream of visitors since. It is the oldest art museum in the southern United States. The 64,000-square-foot Jepson Center for the Arts, a cornerstone of the Telfair complex, opened three years ago this spring. It’s a mecca for tourists, who come to ogle Sylvia Shaw Judson’s original Bird Girl sculpture (from “Midnight in the Garden of Good & Evil”). And yes, the gift shop is pretty great.

Lori Keith Robinson’s and Jan Clayton Pagratis’s visual arts showplace continues to put the spotlight on a cross-section of fascinating contemporary art from all disciplines and media.

Dimensions Gallery puts 41 pieces of contemporary hand-embroidered artwork on display with this pronouncement: “No longer solely the domain of grandmothers and pre-packaged samplers, hand embroidery is making its way into the world of fine art and galleries.”

It was March of last year (the 12th, to be precise) when “Ol’ Pink Eyes” sat down at his grand piano and a played for more than two-and-a-half hours, solo, in the Martin Luther King Jr. Arena.

Less than a year old, the Savannah Phil – with puckish Irishman Peter Shannon out front as conductor and artistic director – is quickly outgrowing its roots as a instrument for the Savannah Choral Society.

Restless and creative, the violinist (and keyboard player) has been known to venture into jazz and experimental musical waters; he’s an organizer and promoter, and the production manager for the Savannah Music Festival.

With a silky-smooth tenor that he wraps oh-so-comfortably around jazz standards, soul and gospel and classical vocal music, the ubiquitous Mr. Moss is also the co-founder and artistic director of the Savannah Children’s Choir.

Hometown boy Eric Culberson’s been a fixture at Savannah clubs for the better part of 20 years. The fiery electric blues guitarist has an ear for the tasty lick, to be sure, but he admits that calling his smokin’ trio the Eric Culberson Blues Band shows a lack of imagination on his part.

“I wish we had a cool name,” he laughs. “Like Shady Johnny & the Switchblades.”

Years ago, before Culberson signed to the legendary blues label Kingsnake, his group was known as the EROK Band. “I think that scared away a lot of the hardcore blues fans,” he says.

In fact, Culberson and blues music weren’t formally introduced until the guitar slinger had been gigging around for a couple of years. In the early ‘90s, his sets were likely to include equal amounts of Lou Reed and Iggy Pop songs as those of Buddy Guy and Albert Collins. “I spread myself too thin, and eventually I just gravitated towards the blues,” Culberson, 44, says.

“I started going deeper into the music. People were literally force-feeding me, making me tapes – ‘listen to this!’ – and I started learning the vastness of blues. There’s all kind of different styles. So I could play Chicago blues, Delta blues, Texas Swing, the gutbucket stuff – there was plenty of room to move.”

He released two Kingsnake albums, “Blues is My Religion” and “No Rules to the Game,” and is about to take the trio into Savannah’s Elevated Basement Studios to lay down some new tracks, which he says are “more adventurous” than straight-ahead blues.

When the project is completed, he’ll start shopping for a distribution deal. In the meantime, there’s work to be done.

The band plays all up and down the Eastern Seaboard, and Culberson – singer, songwriter, frontman and focal point – handles all the booking and associated logistics himself. “It’s not work to me, it’s just a way of life,” he reports. “It’s really not that overwhelming. But hopefully I’ll get to a point where somebody else does it.”

Culberson is thrilled about his “Best of Savannah” wins. “We’ve been really, really fortunate to be able to play in our hometown for all these years, for a great crowd,” he says. “I don’t ever want to take that for granted.” -- BDY.

The Savannah foursome’s distinctive amalgam of honky tonk, rockabilly, rock ‘n’ roll and folk music is impossible to pigeonhole – in fact, Bible is wary of anyone that comes towards him talking about genres and categories. There’s acoustic guitar, bass (both electric and standup), traps and the occasional burst of dobro, fiddle, harmonica and electric guitar. So maybe it’s “cool country.” Whatever. Bible and his bandmates are “grateful” for the continued enthusiasm and support of their hometown fans.

Bible (originally from Texas) is very song-oriented; there aren’t a lot of meandering solos in a Train Wrecks tune. He likes to paraphrase something Tom Petty and Mike Campbell used to say: Don’t bore us with the chorus. Just play the song: Say what you want to say and get out quick.

“It’s the Buddy Holly, Johnny Cash, Ramones approach,” Bible says. “We do really short, two-and-a-half minute  songs most of the time. If a song presses three minutes, that’s pretty rare. In a full show, we might play 30, 40 songs.

“And we never do the same show – sometimes we might start with some Radiohead – it depends on the crowd, and how I’m feeling vocally or whatever.”

Country? Hey, Kenny Chesney and Tim McGraw got nothing on this:

The music “is kind of infectious, I guess. It’s kind of like Johnny Cash on meth.”

The Train Wrecks are getting ready to begin recording their second CD – according to Bible, it’ll be a lot more guitar-oriented than the 2007 debut, “Whiskey & War.” In fact, “a lot of it is almost too fast to strum,” he says. “It just hauls ass.

“I want to go into it with the approach that every song on it, you put it on and you can listen to it straight through. I want it to be like Nirvana’s ‘Nevermind,’ or like ‘Pearl Jam Ten,’ or ‘Johnny Cash at Folsom Prison,’ where you can listen to the whole thing.” – BDY

Sort of Metallica-meets-Yes-meets-Devo-meets-King Crimson, this hard-charging guitar band is simply unchallenged at the art of stewing together metal, hardcore, punk … and richly-textured prog-rock.

Singer Ginger Fawcett’s got the Deborah Harry/Gwen Stefani thing goin’ on; the band is celebrating its 10th year together.

The 78-year-old standup bass legend, co-founder of the city’s Coastal Jazz Association, has written more than 300 songs. The best-known is “Comin’ Home Baby,” which has been a vocal standard for nearly 50 years. All hail Big Ben!

At the monthly First Friday Fetish Party. platter boy spins goth, industrial and leather-bound S&M music – in other words, tunes you and Betty Sue can dance to, Wally.

Runner-up: DJ Vick at Club One

All Walks Of Life (that’s A.W.O.L.) is a Savannah non-profit that encourages youth to fuel their passion for creativity through spoken word poetry slams, theater, film production and other outlets.