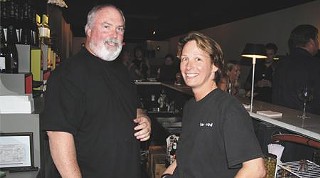 As packed full of quality food-and-bev places as Savannah can seem, there has been a hole in the market.

“Savannah is looking for something other than fast food or gourmet dining,” says Michael Volen, owner of The Distillery, which is located in, well, a former distillery.

And unlike, say, Charleston, “most pubs and bars in Savannah don’t have a lot of good food," he says.

Volen and Chef Matt Kubiak have addressed that dilemma in their own unique way -- but in typically Savannahian fashion -- starting with the drinks end.

“The general premise is to bring a craft beer bar to Savannah, so that people’s palates are expanded,” says Volen. “We offer a full compliment of ales, IPAs, stouts, ciders – a wide variety and range of beers that are well-known throughout the country but are typically not carried here.”

On top of that is Kubiak’s adventurous approach to the menu.

“He has full reign to build the menu around the craft beers,” says Volen. “We’ve infused a lot of beers in our menu, for example, in sauces or in the glazes for a ham sandwich.”

Insisting that “people will come if you feed them well,” Volen says the menu also offers hand-cut meats and Georgia wild shrimp.

But entertainment is also a big part of the Distillery’s appeal, including the classic (and often rare) silent films that are in near-constant loop while the bar is open.

With never a cover charge, the Distillery is also working to build the live music component, including an open mic night with well-known local singer/songwriter Gregg Williams. -- JM

With an intriguing combination of self-effacing shyness and a warm, inviting personality, Paula Letcher has garnered quite a following at the new midtown hotspot bar.food, along with business partner Johnny Baker.

While she's quick to credit Baker's vision for making the place a reality -- "he's a force to be reckoned with," she says admiringly -- it's clear that she is a vital component as well.

"This is the kind of place people can walk to, ride their bikes to, and come see their friends," she says on a busy Friday evening, already hopping at 7 p.m. "Most of the people in here right now are regulars that we see at least once a week."

Wes Daniels and company have amassed great karma since opening on Whitaker Street several years ago and being in instant hit with hipsters, students, and cool people in general.

One of the waterfront's oldest and most revered watering holes is also one of the best Irish pubs in the country.

A venerable name in local nightlife circles racks up another win.

Actually one of the coolest bars in town, and a real piece of the old sod on the marsh.

How could it be otherwise? The last oasis left of old Tybee's eclectic, eccentric spirit. Note there wasn't even a runner-up.

A friendly place in a newly revitalized Pooler-area neighborhood.

Very impressive start out of the gate for this new Habersham Village-area spot opened by local caterer and restaurateur Johnny Baker and his partner Paula Letcher.

"We're just a neighborhood bar, and we're packed every night based on word-of-mouth," says Baker. "Our European wine list has really taken off."

After years of working in Savannah, Baker has learned the hallmarks of a winning recipe here. "We keep it simple, low-budget, but really nice looking." -- JM

Quietly but persistently one of the up-and-coming bar scenes in town, chiefly for its awesome Margaritas.

These perennial winners have a neighborhood location in Habersham Village and a superstore on Abercorn with everything and anything you might want in the beer and wine department.

Memories of the old location on Drayton have faded away as the "new" Churchill's closer to the waterfront has carved its own successful niche in a competitive market.

They quietly but firmly rack up another win in this category. Get it? Rack ‘em!

Hard to argue with the pedigree of the perennial victor in this category. They're fun, they're loud, and they have the best taste in music evah.

Weekly salsa lessons in this sexy environment have been a hit.

A fun little watering hole just off Franklin Square. We hope they survive the development coming to that end of town.

Technically a Westside institution, but in reality just a quick jaunt from downtown.

The crowds have been pouring in – and, yes, leaving happy – ever since Live Wire opened its doors in March of 2008. The site of the old JJ Cagney’s, a vintage 1820s cotton warehouse building with the River Street power station right outside its front door, was leased by Roberston’s father Daniel as an extension of Live Wire Sounds, Inc., his sound reinforcement business.

He wanted to bring the family together under a single roof.

Brenden, a part-time musician who’s created sound palettes for dozens of bands both in town and on the road, was the logical choice to wire the place and operate the soundboard.

His brother Daniel Jr., with years of experience in restaurant and bar management, is the club’s general manager.

Cherise, their mother, worked on the interior design – three months of dead-serious renovations including tearing up lots of tacky carpet and acid-washing the original concrete floors, painting everything, re-lighting and re-dressing the walls of all three floors.

Live Wire has three full bars, video games, art gallery space, a dance floor and a café menu (well, that’s still in the works, but should be coming soon).

At the end of the day, however, it’s all about the music. A good percentage of the coolest national acts who’ve played Savannah over the last year – from jam bands to reggae stars to blues guitar heroes - did their thing on the Live Wire stage.

“We get really good feedback from our bands as far as their sound goes, and our hospitality, and the appreciation of people that come though here,” says Robertson.

“Overall, our success rate is as good as it possibly can be as far as the bands that play here.” -- BDY

The Michael Jordan of this category, absolutely the best for as long as we can remember and likely to remain so into the future.

Speaking of The Olde Pink House