As if taking college classes wasn’t enough, prospective World of Beer employees are required to attend Beer School. “Part of our onboarding process is two weeks of training, and the second week of training is entirely focused on all the beers that we carry in house,” says Chris Geerlings, product manager for the 11-month-old Savannah World of Beer location. “Learning where to find things, the history of the breweries and their locations. There’s a logic to have the 12 coolers organized, by region and style.” 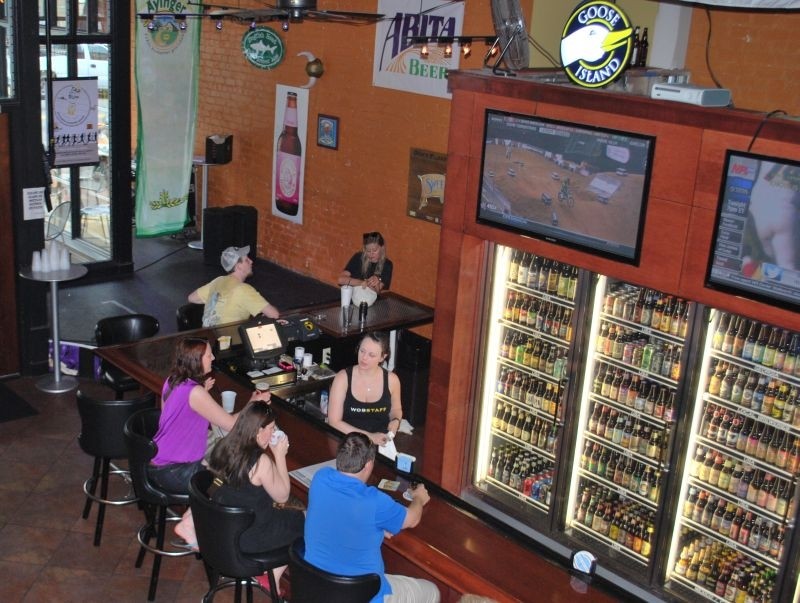 World of Beer: More than 500 bottled brews in 12 massive coolers. What’s not to like?

Of course, the WOB bottled brew list — around 500 at each franchise location, alongside 62 revolving draught taps — goes way, way past crafty boutique-label suds. The deal is, the staff is trained to know which is which, from PBR to fine Belgian ale, and to recommend beers for everyone to the average Joe to the discerning hophead. You get offered a taste before you plunk down for your pint.

The first World of Beer opened in Tampa, Fla. in 2007, the brainchild of two aspiring Pensacola businessmen who’d taken notice of the American explosion in craft beer.

Early on, the two WOB founders were joined by a couple of former Outback Steakhouse executives, who knew more than a little about franchising. Today, there are more than 55 of these little brew beauties all over the country.

On Broughton Street, Greelings and the rest of the staff are kept … well, hopping. “Keeping stuff in stock depends on what on what’s popular from day to day, season to season,” he believes.

It’s uncommon, he knows, for an essentially brand-new business to win in four “Best of” categories.

“I think one of the reasons World of Beer Savannah is doing so well is because craft beer has a real foothold in places like Colorado and California and places out west,” Geerlings says. “It hasn’t gained popularity out here until more recently.

“So our role has been to fill a void, so to speak. And meet that untapped demand. Pun intended.”

Runner-up, Beer on tap: The Distillery

Best Place to Spot a Celebrity

What can we say but “Well done”? Susanne Warnekros and her hard-working team have made the Jinx the center of the downtown universe, winning in nearly all these categories for years and years now. Over in the A&E section, the Jinx was also voted “Best Live Music Club.” All together now … well done!

First, it’s the only brew pub up in the city, where you can watch the stuff being made. Second, the 5,400-square-foot Beer Garden (outside) opened in March. And third, the menu is “a range of dishes from simple comfort food to eclectic gourmet cuisine.” Yep.

Runner-up: Rocks on the Roof

Thirty-three years and counting in the same location, Vic Power’s old-school Irish public house, with its unadorned wooden walls and floor and separate rooms for separate stuff, continues to raise the bar. In 2013, Kevin Barry’s is the bar.

Live Oak Restaurants operates four Spanky’s in the area, and this location — it’s on Mall Boulevard, near the (um) mall, is the family-friendliest of all. Full-service menu.

The deck at Molly's

Despite its abject, leafy loveliness, there are only a couple of restaurants in Wilmington Island. Whitemarsh is right there on 80, Tybee is flashier and more famous, but Wilmington — accessible only via the detour that is Johnny Mercer Boulevard — is like Chatham County's little out-of-the-way gem.

That's one of the reasons Molly McGuire's, which has been on the island for just over three years, has become the favored local hangout.

"We're not downtown, and we're not on Tybee, so we're not on the beaten path," says the restaurant/bar's manager Kristen Heath. "We do get a few tourists that are recommended by others, or by the other restaurants, but we're definitely a neighborhood place. There's people who'll be in here five, six times a week. If not more."

They come for the food, to be sure, and the frosty drinks, and the family-friendly atmosphere both inside and out.

It's the lavish, pagoda-like outdoor deck that keeps 'em coming back, Heath explains. The deck is like a little island oasis all its own, refreshingly cool in the warmer months, and ideal for chillaxing with live, local music and the ubiquitous burgers 'n' beer.

It's sort of like an outdoor Cheers (albeit with kids, grandparents and the occasional well-behaved dog).

"We're not a touristy place," Heath says. "We're so dependant on our regulars and our locals, so we have to make sure we keep people happy and make sure everything, quality-wise, is on par all of the time."

Set back off Johnny Mercer, it's a little hard to find unless you know what you're looking for.

"It's funny," Heath laughs, "because there are people that live on the island who are like 'We didn't even know you were here!'" 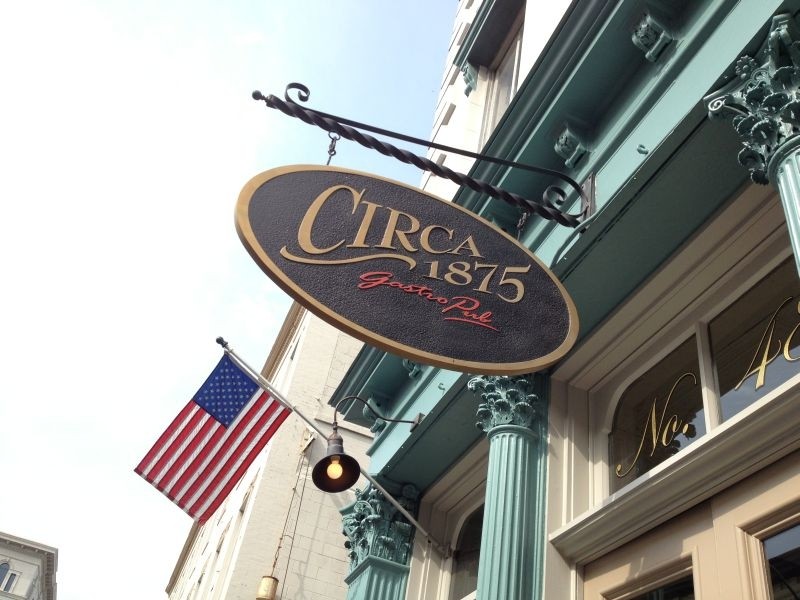 While the historic building dates back to sometime around 1875, the swank tavern has been classing up the stretch of real estate on Whitaker between Congress and Broughton Streets since 2005.

While the historic building dates back — you guessed it — to sometime around 1875, the swank tavern has been classing up the stretch of real estate on Whitaker between Congress and Broughton Streets since 2005.

A class-act option for a stellar martini, Circa's intimate scene allows patrons to retreat into alcoves or offer themselves up as window dressing atop plush bench seats. Other late-night draws include mobster candlelight and the opportunity to elbow-rub with Savannah's elite.

A serving station at the back of the bar leads to the adjoining restaurant and creates a noise and kinetic excitement; the counter laden with artisan breadcrumbs, the soft clacks of dishes, the harsh clinks of silver on the off-beat.

"We want people to feel like they're in the old days when VIPs would go in through the kitchen, that kind of feel," general manager Tony Rossing says. "The bar feeds off the energy transfer at the back really well."

Rossing says owners Donald Lubowicki and Jeffrey Downey, transplants from points north, have called the South home for more than 30 years now, with maybe 15 of those years in Savannah. It's not unusual to see Downey behind the bar, mixing up cocktails.

"They've got passion. It's their baby. And it creates a wonderful atmosphere," Rossing explains about the owners' dedicated involvement. "They hire people they know and trust, which means no babysitting, zero turnover. It's a dream job."

The city plans to widen the sidewalks on Whitaker, cut traffic down to one vehicular lane and a bike lane in the next few years. Rossing says they envision an awning with café tables outdoors, Circa's expansion into an ever more authentic Parisian feel.

Runner-up: Rocks on the Roof

Fun and funky, the 'Poo features the best pizza on Tybee Island. Couple that with a cold one and live local music and whether you jam into an inside booth or stretch out on the porch you're in for a delightfully low-key Tybee experience.

By "westside" we mean Pooler, and Lucky's — featuring killer burgers and other tasty treats — has the town's most fun Karaoke nights, Wednesdays through Saturdays.

Yet another muy stupido city noise ordinance has restricted Wes Daniel's presentation of live music, but his Whittaker Street club (described as both "hipster" and "casual" by yelp.com) retains its fun, anything-goes sense of humor. And one of the coolest Trivia Nights in town. Did we mention the $5 Scorpion Tea?

A very steady, very close–knit regular clientele means you can pop in Johnny Baker's place most any night and find a good crowd.

When they say rooftop, they mean rooftop ... high atop the Bohemian Hotel, you can sit here and go all birds-eye with the Talmadge Bridge or watch boat traffic on the river or goof on the tourists poking along River Street ...

House-infused cucumber vodka, rosewater, lemon juice and seltzer. Order a Rose Zarem, and you'll want to stay at the Sparetime indefinitely to peruse their other alchemic delights.

The MLK Mexican restaurant serves up the 'ritas big and cold, with or without the ice and the salt-rimmed glass. Bring on the mariachi band!

Shaken or stirred: Jen's has 300 variations on the martini – let that sink in for a moment. And 300 beers. And food.

At the Olde Pink House, Restivo — who also happens to be a great guy — professionally manages the historic wine cellar, providing the perfect pairing for the kitchen's seamless blend of New Southern and Classic Southern cuisine.

Tastings are available on demand, and the selection runs to more than 400 wines from all over the world.

Nearly 30 years in business and still going strong. Cheers! "With a resident sommelier, an accredited beer judge, and over 100 years of cumulative tasting experience, we know how to find the very best products."

"Killer cocktails in a stylish revamp of a mid-century bank," raved Southern Living. And nearly all of the food is purchased from local, or Georgia, farmers and fisherpeople.

With a rooftop terrace, "Winston's Wine Bar" in the cellar, and a central bar shipped straight from the U.K., here's where you can authentically fish your chips, pie your kidneys and Yorkshire your pudding. Among other things.

It's right there in the name. From Guinness to fine whiskey, bangers to mash, all wrapped up in fine tartan, Molly's is cozy and comfy and decidedly Scottish. It's the kind of pub that other cities would kilt for ...

Runner-up: Molly McGuire's (which is not a Scottish pub, by the way)

Since 2008, you can sit inside, outside, upstairs overlooking Congress, hear live music, play video games or smack them billiard balls around ...

Manager Travis Coles and the staff are serious about making sure everyone —straight, gay and anything in between — has a good time at Club One. The cabaret stage, where the infamous Lady Chablis and others ply their particular trades, is the best in the city.

Three floors, three vibes ... that's this neon-lit, pulse-pounding club's motto, and the Latin dance floor is the hottest of all (the others are House and Top 40). They've got VIP booths, a sports nights dubbed "Cleats & Cleavage," and a stylish New Year's Eve masquerade ball that's like nothing you've ever seen.

From the NFL to the World Cup, Coach's 50-plus big TV screens got you covered from every conceivable angle. The food's good, too, and it's family-friendly. Sometimes live bands on the weekend.

The only place in town that has Karaoke seven nights a week, with a real (sort-of) stage and, of course, a bar within singing distance. McDonough's is where the cool Karaoke kids hang out.