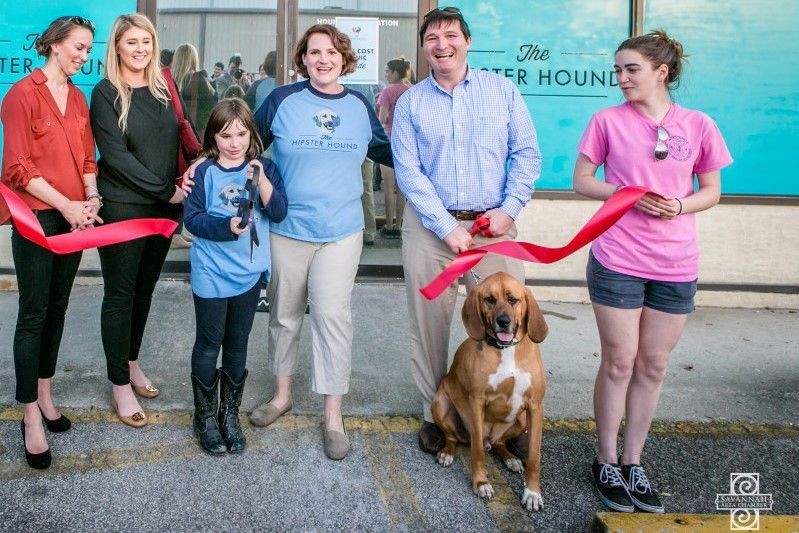 First off, there is an actual Hipster Hound. His name is Rex.

The logo of the smash-hit new business—only just now beginning its second year—is based on owner Tonya Rintye’s own faithful companion.

“Rex is our temperament tester,” Rintye says. Prospective puppies at the Hipster Hound’s boarding facilities on the Southside must pass the test of being able to socialize with other dogs, chief among them Rex himself.

In their short time in operation, The Hipster Hound is already boarding about 50 dogs, in addition to a thriving dog-sitting business. (The dog-sitting component is valuable, Rintye says, for those dogs who don’t pass the temperament test with Rex but still are in need of boarding-style services at home.)

The success has been so dramatic, in fact, that Rintye is already considering a second location.

This success isn’t just due to being in the right place at the right time. Rintye came to Savannah from Atlanta with an extensive marketing background of her own, which serves her in good stead with The Hipster Hound.

“My husband and I came here for his job, but there weren’t really the type of marketing and advertising positions available for me in Savannah that there are in Atlanta,” she says.

So, she followed another passion: Puppies.

Specifically, the whole thing started out in selling doggie treats at local markets. It very soon blossomed into dog-sitting, and then the whole idea of boarding and grooming services.

The Hipster Hound’s success is also due, Rintye says, to getting a Savannah Small Business Development Loan to help her out with her business plan.

Another famous local pup is a boarder at Hipster Hound: Daisy the Bat Dog, the mascot of the Savannah Bananas baseball team.

The Hipster Hound even offers a shuttle service, picking up dogs from their homes, taking them to the boarding facility on the Southside, and back again.

Their vehicle sure came in handy during Hurricane Matthew.

“We were so glad to have it when the storm hit,” recalls Rintye. “We were able to evacuate about 20 dogs with it, and kept them all safe and sound.” — Jim Morekis

Speaking of The Hipster Hound , Best Of Savannah 2017