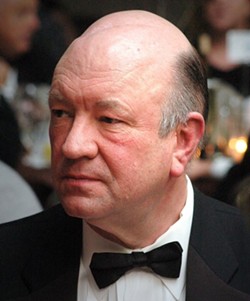 Merriam-Webster defines philanthropist as “one who makes an active effort to promote human welfare.” But true philanthropy comes with higher standards, like altruism.

Altruism means that you give your time and money without expecting recognition. And I know for a fact that Howard Morrison doesn’t want recognition.

“Don’t write this story,” he tells me flatly. “The things we’ve done are simple and really don’t amount to anything. Money is not important. It’s how you live your life.”

Morrison, a Savannah native and Yale graduate, spent nearly 30 years in the banking profession, much of his career in Atlanta. He returned home in 1996 to start a second career, philanthropy, in which he routinely asks this community tough questions.

“How do we empower people to live up to their maximum potential?” is what he likes to ask the most. “That encompasses everything that I’m interested in,” he says.

And asking questions like that – challenging the received social order – is another higher standard of true philanthropy. Or as Savannah Children’s Choir Co-Founder Roger Moss says of Morrison, a choir supporter, “He’s not one of those Savannah residents who say ‘Well, we’ve never done it like that.’ He’s all about ‘Well, what can we do?”

This is revealed even in a partial list of organizations that have received generous funding either from the Mary Lane Morrison Foundation, the family foundation that Morrison inherited indirectly from his grandfather, or from he and his wife, Mary, personally.

Georgia Tech, Savannah County Day School, Savannah Children’s Hospital, United Way, Georgia Conservancy. He was instrumental in the establishment of Ocean Exchange and what’s now called The Creative Coast, among other great things. “A better future” might be a theme.

Perhaps that’s why he calls Planned Parenthood his “primary focus.” “I want to make sure that every little baby that comes into the world has a loving, caring mother and daddy,” he says. He calls Parent University one of our city’s most important non-profits.

The Morrisons or their foundation also support the arts and humanities, including Telfair Museums and Georgia Historical Society. They were very kind to a dear artist friend of mine. And Howard’s latest interest involves saving the Old Cotton Exchange, a historic building troubled by time and gravity. And that’s a highly incomplete telling of his story.

“A mistake,” he calls this poll’s result. At the risk of contradicting him, a higher standard demands that I write otherwise. Howard Morrison goes beyond anyone’s definition. — Orlando Montoya

Soup it up for Loop It Up: Connecting the dots