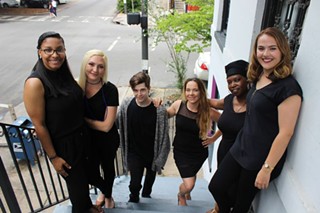 Sweet Water Spa exudes a certain kind of calmness that makes it the best place to work, but owner Somer Patton acknowledges that it takes a lot of effort to get there.

"It's not really relaxing working here!" she laughs. "It's hectic behind the scenes, but everyone works well together."

Patton strives to keep a positive work environment in her spa, which includes culling her relatively small staff to be not only the most talented, but the most positive.

"I do try to encourage positivity, and I don't normally keep people around if they seem to be more of a negative type of person," she explains. "Constant complaining affects everybody and creates resentment we don't need. Our job is to relax people—life is stressful enough."

Sarah McNamara, head massage therapist at the spa, is that kind of positive that Patton likes to keep around. She loves that her boss lets everyone be themselves.

"She sees everyone's uniqueness and lets us be that way," McNamara says. "Everyone has their own style of doing things, and she's more about celebrating you and how you are instead of making everyone conform. I like that."

Both McNamara and Patton acknowledge that other spas are strict and tend to go by the book, but when every customer has different needs, tuning in with them becomes more important than procedure.

"When it comes to massage, what separates a lot of people is just that they are really in tune with their client and their energy," McNamara explains. "Energy is a big part of all spas."

"I've been doing massage for a long time, and I never liked that every place I worked they wanted to tell me how to do my massage," says Patton, who's owned the spa since 2011. "I did't want to conform to their ideas."

With every appointment, McNamara follows up with her clients on post-massage care to ensure they get the most out of their experience.

"I'd rather you go home and feel good the next day, rather than just have the great experience that one day," she says.

That caring aspect is present throughout the entire spa, from the top down.

"Somer is really understanding about everyone's needs and everything. She actually does care," says McNamara. "I have bosses that literally work you to death and don't care. She'd rather you do a good job and give it a hundred percent than be really tired."

"I think I'm pretty laid back, and I have certain things I'm very particular about," Patton says, "but as long as everyone's showing up on time and being professional in front of the clients, it's all good." —Rachael Flora