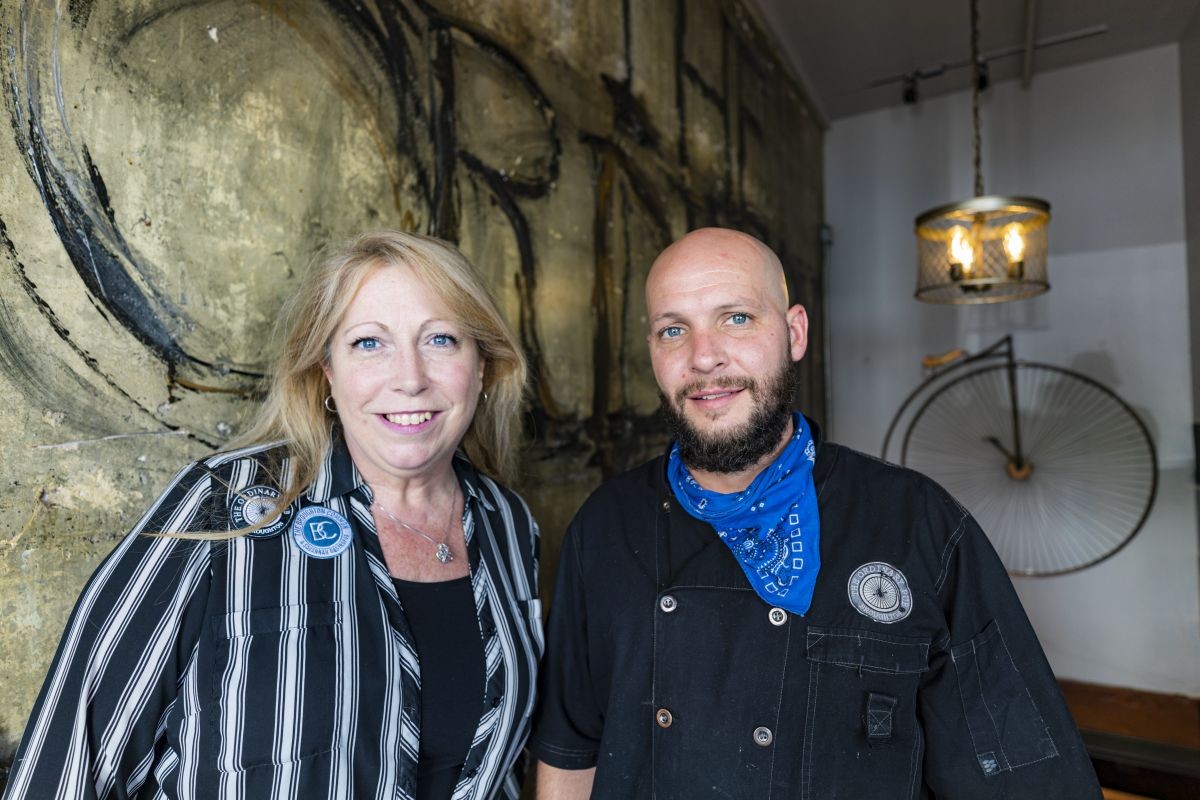 After five years in the Savannah culinary scene, The Ordinary Pub is the “best” in multiple categories – Best Brunch, Best Pub Food and – a true jewel in the crown for a city that has multiple drink options – Best Bloody Mary.

The owners, husband-and-wife team Mike and Bee Vaudrin, opened their restaurant after more than a decade of working for other area restaurants and eventually deciding it was time to open their own place.

“We found a closed basement taco joint that no one wanted,” Mike explained. “We spent months refurbishing and building the food and cocktail menus, and opened The Ordinary Pub in June 2015.”

The building itself is the old basement of Savannah’s original Sears & Roebuck building, right on West Broughton Street – patrons should look for the doors leading down to the single door entrance at 217 ½.

Mike, who had spent nearly a decade as the cook, bartender and general manager of The Warehouse Bar and Grille on River Street, was joined by Bee in this new venture. She handles events, human resources and décor.

“And she puts up with me!” Mike said. “We do this thing together. She is the most amazing partner.”

The goal all along was bringing classic pub dishes with a “culinary twist,” Mike said.

“I wanted an approachable fare ... the very first dish we developed in our kitchen at home was the f.g.t. Caprese salad. I’m a big Caprese fan, and the South loves fried green tomatoes. It just seemed they were meant to be together.”

Pub food seems to lend itself to brunch, so it makes sense The Ordinary Pub won in both categories – while nearly everyone knows that the word itself is a mash-up of breakfast and lunch, the dining experience has turned into the first meal after a night of, shall we say, extravagant drinking. Along with some “hair of the dog” to take the edge off, diners usually end up wanting something hearty and not necessarily the most nutritious option.

The Ordinary Pub answers the call with menu items like the chorizo brunch skillet – which includes potato hash, chorizo and a three-cheese egg scramble. Or, you can try the mimosa poached shrimp tacos, a nod to the popular brunch drink. There’s even the millennial favorite, avocado toast featuring the savory green fruit alongside fresh salsa, greens and feta cheese.

But according to Mike, there’s one menu item that reigns supreme over all.

“The most popular has to be our pork belly donut slides,” he said, giving some hints as to how the home cook may attempt to recreate this iconic dish in their own kitchen. “It’s pork belly slow braised in Dr. Pepper and bourbon with a housemade bacon onion jam on a donut slider, made by Baker’s Pride (a local bakery over on E. DeRenne Ave.).”

It’s definitely true – the menu item is one of the most mentioned across the Internet. One online review states “the donut pork belly sliders were some of the best bites I’ve had in the history of me eating and tasting things.”

The pork belly donut slides also have a spot on The Ordinary Pub’s dinner menu, alongside items like the duck confit tacos, southern fried bison and a low country mac and cheese which tosses together gouda, cheddar and mozzarella alongside shrimp and Andouille sausage.

Their brunch and dinner menus have accompany cocktail menus (and various wines and beers on tap, as well as 96-ounce “big ass mules”). You can find your traditional daquiris, mimosas and margaritas here, as well as something other more unique beverages – “The Office” fans will enjoy knowing there’s a Pam Beasley & Jim (PB&J) cocktail, featuring peanut butter fat washed vodka, a grape house cordial and banana liqueur.

“It all starts with a fresh tomato,” he said. “Our chefs make each Bloody Mary sauce from scratch. Our vodkas are all house-infused by our bartenders. There are no secret ingredients, no tricks. It’s just fresh ingredients, time and effort.

“If you walk into our prep kitchen at any time, you’re almost definitely going to see someone weaving bacon and making Bloody Mary mix.”

Speaking of bacon, there’s a Bacon Bloody Mary on the menu featuring candied bacon and a bacon salt rim. You can change things up with a Spicy Bloody Tommy which uses green tomatillos and a pepper-infused vodka for a real kick. The Mezcal Bloody Mary tops everything off with some Miller High Life and cilantro.

“My favorite, hands down, is the Pickled Bloody,” Mark said. “It’s made with housemade pickling juice.” It also includes that pepper-infused vodka, some hot sauce and a pickle.

It’s no big secret that 2020 has been a rough year for many industries, particularly restaurants. After originally quarantining during the COVID-19 pandemic but before The Ordinary Pub was able to reopen as a restaurant, the Vaudrins and their chefs set up “The Ordinary Butcher Shop” at their sister restaurant, The Common Public House, and started butchering meats.

“We were butchering meats, selling toilet paper, eggs, anything people wanted,” Mike said. “It was an awesome day when we were able to reopen as a restaurant. But the lessons learned in the ‘butcher shop’ era were irreplaceable. We’re a better, more grateful group.

“Every day you wake up with an opportunity to work on your craft and strive to impress the guests is a good one,” he added.

It’s a rare day off for restaurant owners, but when there is some down time Mike and Bee will go thrift shopping to find “weird little things” for their restaurants. They also enjoy Mexican food and grabbing some margaritas in the afternoons before the big dinner rush.

“I wish I had a cooler answer, but that’s a pretty big day off when we get one!” Mike said.