It stands to reason that a restaurant that prioritizes beer would have excellent pub food.

After all, the two go hand in hand, don’t they? After drinking for hours, food is necessary, not just to sober up but to satisfy. Sure, you could bolt to Wendy’s for a Baconator, but you could simplify the process by staying at the same place all night long.

Crystal Beer Parlor is your one-stop shop—come for one of their 26 beers on tap, stay for their bleu chips, which owner John Nichols calls “addictive.”

The success of Crystal’s pub food rests in its familiarity and its appeal to every palate.

Most of the menu is familiar American fare like burgers and salads, but Nichols notes, “Our menu has got a little bit of Greek, or Greek-American.” There’s the Aegean Sampler, with hummus, tzatziki, and dolmas, and a standard Greek salad that punch up the menu.

Nichols points to the Au Poivre Burger as a big hit. Named for a French method of coating a steak in cracked peppercorns, this rendition involves a green peppercorn brandy cream sauce and grilled onions on top of the burger.

Nichols is also especially proud of the Baked Southern Deviled Crab, a traditional Southern recipe that doesn’t mess around.

“So many places have a lot of filler and breading,” he says, “but ours is mostly crab meat.”

One of Crystal’s biggest selling points is its reasonably-priced food. Guests know they won’t break the bank by eating and drinking there, and Nichols takes pride in that reputation.

“I’d rather sell twenty burgers than one,” he says. “I want a butt in every chair.”

After all, maybe the reason Crystal Beer Parlor is so popular is how well Nichols knows the people and what they need.

“We’ve got all that.” —Rachael Flora 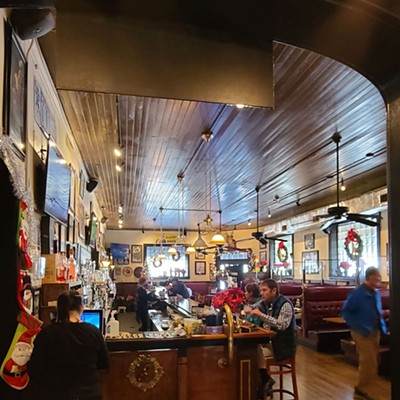 Savannah Craft Beer Week is upon us!