College Issue: Beyond the blue blazer

Natty threads separate the boys from the men 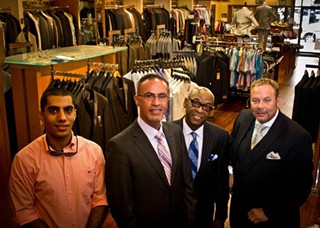 The dapper gents of The Men's Store By Joseph: Sam Dabit, Joseph Dabit and haberdashers Tommy Hall and Tim "Bish

All you young dudes, listen up: You're looking fine in your threadbare jeans and thrift shop T-shirts.

Love the post-hipster thing, too, with the wrinkled button-downs and skinny chinos. Even the jocks in the half-calf black athletic socks with the fratty upside-down visors are mysteriously compelling.

You're rockin' it all, really.

But it's time to drop some truth. At some point, be it for a job interview or meeting your girlfriend's parents, you are going to have to clean up your act.

And we're not talking about shaving off the soulpatch: You're going to need a good suit. And a decent pair of shoes.

If the thought of learning to dress like a grown man brings up terrible memories of boxy double-breasted Girbaud blazers and your grandpa's Sansabelt pants, fear not. Looking sharp in a suit is both achievable and affordable, while leaving plenty of room for personal expression.

"Dressing for success doesn't have to be boring anymore," assures Joseph Dabit, the well-groomed proprietor of The Men's Store by Joseph on Broughton. "There are so many options."

Dressed in sleek charcoal gray and blue suede shoes, Dabit sweeps his hand around the spacious shop, pointing out lightweight silk-wool blends and cool seersucker in unexpected hues. Natty threads run in his blood: His father and uncles emigrated from Jordan in the 1950s to sell clothing in Chicago, and Dabit has been in the men's garment business since the mid-1980s. He owned his first shop in Selma, AL, then moved to Savannah, where he took over Heyman and Son, the downtown bulwark that had been dressing the city's gentlemen since the 1920s.

Dabit kept Heyman's name for more than 20 years, selling mid-priced suits out of the lofty space with its winding half-staircase in the back. The family also owns the sportier On Time Fashions next door, though the suits remained a mainstay for bar mitzvah boys, bankers and other professionals.

But business trends, like lapel sizes, evolve. At the urging of his son, Sam, Dabit recently relented to carrying bigger brands like Ralph Lauren, Izod and Vineyard Vines, and the Dabits rebranded as The Men's Store by Joseph last December.

Now 19-year-old Sam mans the snazzy alligator and whale icons of southern casualwear up front, while haberdashers Tommy Hall and Tim "Bishop" Brown advise on the serious business hanging on the elegant racks along the brick walls.

"It's been a total transformation," says the elder Dabit, standing next to a veritable riot of paisley bowties.

(Note: A "haberdasher" is one who helps dress you from head to toe, helping you discern whether the fedora actually works and figure out which pair of socks goes with the Cole Haan loafers.)

"Anyone can sell clothes, but not everyone can be a haberdasher," explains Brown. "The word they use nowadays is 'stylist'.")

Suits at the Men's Store by Joseph run in the $200-400 range, with a rack of big and tall options and an in-house seamstress to hem sleeves just right. (Consider it a small investment in your future, son.) Those aiming for the upper echelons of society can also snag the requisite item in every gentleman's wardrobe for a reasonable price.

"I can get you in your own tuxedo for a hundred and fifty," promises Dabit. "You can't rent one for much less than that."

A few doors down, another family menswear shop has also dressing up Savannah's men for decades. Owner Kieffer Parker can be found almost every day of the week at the recently relocated J. Parker Limited, on Broughton since 1972. The store was started by his dad, Jimmy, who developed his own line of polo shirts emblazoned with a blue crab.

Parker has plenty of recommendations for looking effortlessly handsome in the office and out in the Lowcountry.

"You can't go to an oyster roast without one of these," he says, holding up a rugged Barbour jacket.

On the formal side, Parker has exact advice for a college man looking for his first suit.

Parker, a staple on the social scene who laughingly declined to be photographed for this article because he didn't want "to end up on a dartboard at Hangfire," has also observed an increase in the options of color and style, especially in accessories.

"The rage right now is crazy socks. Even the conservative guys are buying them to wear with suits," he says.

Indeed, both stores have a spectacular selection of wacky socks, from polka dots to psychedelic stripes. It's just one way to put a personal spin on the professional uniform and keep it classy. The attention to a cleaner, casual look is also paramount as trends keep tipping towards sharp-dressed men.

"Men are definitely dressing up more lately," observes Sam Dabit, who you can bet was the best-attired kid at his senior prom.

"A lot of guys come in now and say their closets are bigger than their wife's."

Something to aspire to, young gents.

Style for all sizes at fashion show to benefit Safe Shelter