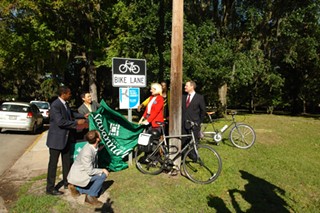 Plenty of cities claim to be bicycle friendly. And why wouldn't they?

As a result, it is sometimes more aspirational than accurate when a municipality proclaims itself to be bicycle friendly.

That's why Savannah's recent designation as a Bicycle Friendly Community is so important. It's a credible, verifiable and meaningful third-party affirmation of our progress.

Bicycle Friendly Community status is conferred only after a "comprehensive inquiry designed to yield a holistic picture of an applicant community's work to promote bicycling," according to the League of American Bicyclists, which manages the program.

Garrison Marr, who coordinates the City of Savannah's sustainability initiatives, organized a team to prepare the city's Bicycle Friendly Community application. It's an exhaustive instrument that uses some 90 measurements to gauge a community's success in creating safe and convenient places to ride, teaching people of all ages and abilities the skills and confidence to ride, encouraging a strong bike culture that welcomes and celebrates bicycling, ensuring safe roads for all users, and planning for bicycling as a safe and viable transportation option.

Marr and his colleagues worked to document the city's performance on technical measurements such as percentage of the existing on-street bicycle network that meets or exceeds current standards set by the American Association of State Highway and Transportation Officials, the Federal Highway Administration Manual on Uniform Traffic Control Devices, or the National Association of City Transportation Officials.

Other questions probed efforts to encourage cycling through programs and events. Savannah's application was surely strengthened by the full slate of National Bike Month activities and other initiatives organized by the Savannah Bicycle Campaign.

Fewer than 300 cities across the United States have earned the designation since the Bicycle Friendly Community program was created in 2003. Savannah is the largest city in Georgia to achieve the distinction.

So what does a bronze medal in bicycle friendliness mean? The League of American Bicyclists suggests that, "Bronze communities do not necessarily feel bike friendly," due to the absence of a comprehensive bicycle infrastructure network and the presence of drivers, who "may not yet be aware that they need to share the road with cyclists."

Nonetheless, bronze is a definite step up from the honorable mention Savannah received on its previous application in 2009, which indicated that the city was "just starting to address the needs of cyclists." Bronze status confirms "important steps are being taken" toward "providing safe accommodation for cycling and encouraging people to bike for transportation and recreation."

A ceremony was held in Tiedeman Park on Oct. 15, at which government officials and citizens joined Alderwoman Mary Ellen Sprague to celebrate the Bicycle Friendly Community designation. But that wasn't the only announcement made that day. Mobility and Parking Services Director Veleeta McDonald revealed that the city has teamed up with Chatham Area Transit to extend its bike share system with a station at Ellis Square to complement the station that will be installed at CAT's Joe Murray Rivers, Jr. Intermodal Transit Center. Additional locations are also being discussed.

The Savannah Bicycle Campaign is also working with partner organizations on two major initiatives that will yield tremendous benefits for all residents, not just those who ride bikes.

The first is the completion of the long-awaited Truman Greenway, which will link Daffin Park and Lake Mayer. The other is the adoption of local Complete Streets policies to ensure proper accommodation of bicyclists, pedestrians and transit riders in street improvement projects and new roadway construction.

Savannah's growing reputation as a cycling destination would also receive a boost from additional infrastructure, as has been proved elsewhere in the state. A recently published study prepared for the Northwest Georgia Regional Planning Commission demonstrates the considerable economic impact of the Silver Comet Trail, which runs through Cobb, Paulding, and Polk counties to the Georgia/Alabama state line.

The trail generates $57 million in direct spending and has a $461 million impact, representing a 4-to-1 return on investment. Imagine what a comprehensive bicycle infrastructure network could do for Coastal Georgia.

Savannah's Bicycle Friendly Community status can serve as both an inspiration and a challenge to do more. It won't take alchemy to turn bronze into silver or gold.

Hard work and cooperation between government, businesses and citizens will do the trick.