THE BENEFITS that biking and walking bring to Georgia communities are more widely understood these days, making it easier for advocates to engage with lawmakers. Hot coffee and biscuits also help.

That’s why Georgia Bikes organizes an annual Biking and Walking Breakfast for legislators and advocates at the State Capitol. Rachel Hollar Umana, executive director of Bike Walk Macon, was in Atlanta for this year’s event on Feb. 4.

“The bicycle breakfast gives me the opportunity to meet face-to-face with the lawmakers who are making the big decisions about how to fund and build our streets,” she said. “I always return to Macon feeling incredibly inspired by our lawmakers’ sincere interest in improving transportation conditions for everyone in Georgia.”

“There’s definitely a heightened awareness and enthusiasm from elected officials regarding biking and walking,” Bike Walk Savannah Executive Director Caila Brown said. “More than enthusiasm, though, is a recognition of how critical these policies and projects are.” 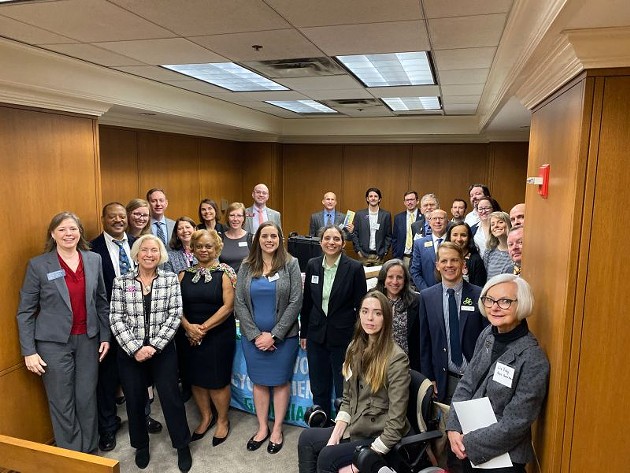 Biking and Walking advocates from around the state were ready to connect with lawmakers during an annual breakfast event, organized by Georgia Bikes, on Feb. 4.

Umana is tracking several pieces of legislation closely, but singled out one as being particularly important.

“I’m excited to follow Senate Resolution 654, which would allow the fuel tax to fund all types of transportation projects, not just bridges and roads,” she said. “It could revolutionize transportation in our state by providing more funding for transit and other forms of multimodal travel.”

“This resolution would be transformative in how we think about our streets, moving past addressing surface-level problems and on to larger fixes aimed at increasing the efficiency of our transportation system,” she said.

Georgia Bikes Executive Director Elliott Caldwell is watching SR 654, but has e-scooters and mobile phones on his radar as well.

“Our main concern has been to not conflate e-scooters with e-bikes — which we had a bill passed on last year thanks to Rep. Teri Anulewicz — and create legal parity. This bill meets our standard.”

“The bill also removes a first-time offender fee waiver. We support the hands-free law, but are not sure raising fines would act as a necessary deterrent. We concur with Rep. Scott Holcomb, who would like to see a data driven approach to fines and a deeper focus on driver education,” he said.

Of interest to coastal residents is Senate Resolution 690, which encourages the Georgia Outdoor Stewardship Trust Fund and other entities to support implementation of East Coast Greenway projects in Georgia. The greenway is a proposed network of 3,000 miles of trails connecting 15 states and 450 cities.

Georgia’s East Coast Greenway projects include the DeRenne Avenue to 52nd Street segment of the Truman Linear Park Trail in Savannah. It was slated to receive funding this year from the Georgia Outdoor Stewardship Act, but was later removed from a list of approved projects when revenue came up short of projections.

The act, which went into effect last July, dedicates a portion of existing tax revenue collected from the sale of outdoor recreation equipment to “support parks and trails and protect and acquire lands critical to wildlife, clean water and outdoor recreation.”

Another project, the Tabby Trail in St. Marys, suffered the same fate. Nine trail projects survived the cut, but all are north of the Fall Line. Senators Lester Jackson and Ben Watson of Savannah, William Ligon of Brunswick, Jack Hill of Reidsville, and Tyler Harper of Ocilla sponsored SR 690, which would dedicate $3 million annually to East Coast Greenway projects.

“Those funds can come from a variety of existing programs — some dedicated, some competitive — but there should be strategic prioritization for investment in the project. Without predictable resources for the planning, design, and construction of the Greenway, it will take decades to complete, and coastal communities will miss out on the many benefits of having a completed trail system.”

The ranks of lawmakers with whom Caldwell has been working is even more geographically diverse.

“We have legislators from all corners of the state talking about joining friends for bicycle rides and wanting safe places to ride,” he said. “The health aspect seems to be growing and not just from a ‘wear spandex, go fast’ perspective but acknowledgment that daily bicycling, even if just for a few miles on a hybrid bike, is good for one’s own health and community health.”