EVERY Thursday evening the BikeAthens workshop, which is normally used to refurbish bicycles for people in need, opened its doors for Fix Your Own Bike Night.

The weekly gathering offered advice on bike repair and maintenance, access to an inventory of tools and spare parts, and a welcoming space for socializing.

And it’s exactly the kind of event that’s become impossible to host safely during the pandemic. 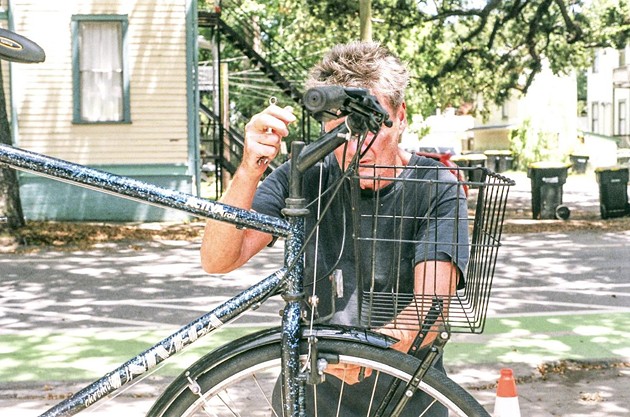 Bike Walk Savannah’s New Standard Cycles workspace, which is used to refurbish bicycles for people who need affordable transportation, is too small to allow social distancing. Instead, a reduced number of volunteers spread out to work in the parking lot when weather permits.

“Thursday nights used to be a place every week where the regulars could hang out, talk about where they’ve been riding, show off new bikes or builds they were working on, and really just be around other people who love to ride their bikes,” BikeAthens Executive Director Scott Long said.

“One of the hardest things about living in COVID times is trying to figure out how to maintain the connections with our local community.”

Could Fix Your Own Bike Night go virtual? How would it work? What would it look like?

“When we first started doing this over Zoom we assumed that at least a couple of us had to be in the shop so we could show people all the tools and parts they would need. We were focused on having multiple camera angles and it was setup like a cheap cable access TV show,” Long said.

It has since evolved into something different, but more meaningful.

“It turns out that so much of what the FYOB experience is at the shop is actually just the knowledge and personalities of the people in our community. We can all pretty much do this from home or wherever we are,” he said.

“I know a lot of people spend all day in Zoom meetings and it sounds like the last thing they’d want to do is hop on another call, but it’s been really fun to see people take their cameras into their garages or out on the back porch to show everyone a bike that they are excited about.”

Closer to home, Bike Walk Savannah’s New Standard Cycles program — which was founded in 2014 using BikeAthens’ Bicycle Recycling Program as a model — has been forced to adapt as well.

“While we usually work directly with other nonprofits and service agencies to provide bikes for clients, we’re still seeing that they are overtasked with providing other essential services. We’ve received 182 requests for bikes since April, and have been able to provide 75 so far,” said Caila Brown, Bike Walk Savannah executive director.

The BWS workspace, like its counterpart in Athens, has been closed to the public and is not large enough to safely accommodate all of the dedicated volunteers who previously came together on Thursday evenings and Sunday afternoons to refurbish bikes.

The pandemic has also thrown a wrench into another aspect of Brown’s work: hosting events that encourage people to get out and explore Savannah together.

“We had a lot of plans for the 2020/2021 events calendar, and those are all being shifted to be as virtual or small group as possible,” she said.

“At the same time, we’ve seen so many new people out biking, walking and rolling, and we so wish we could be hosting our large group events to bring everyone into the fold.”

“The concept of working remotely has been growing in the private sector for many years. Now the public sector has realized the benefits and opportunities,” he said.

“I like having the ability to assemble virtual teams, which allows me to bring in people from around the state for meetings and check ins.”

One of his most recent efforts involved engaging city staff, citizens, and subject matter experts to create a bicycle- and pedestrian-friendly driver education program, which was planned and produced through virtual collaboration.

The video series is designed to educate city employees on best practices for sharing Dunwoody’s streets. Individual modules are dedicated to state laws and local ordinances, common types of crashes and how to prevent them, and other topics.

Seconder said undertaking sprawling projects, which involve large budgets and long timelines, will be even more daunting until we emerge from the pandemic.

“Think about what you can do in the meantime that doesn’t require a lot of resources,” he said. “There’s a whole spectrum of things that can be accomplished, including the development of new policies.”

City officials and citizens who have found ways to be creative, adaptable, and resilient during the pandemic can continue to use the skills they’ve learned long after conditions improve, Seconder said.