What type of bike is best for exercise? For commuting? For simply riding around the neighborhood with the kids?

Are bicycles from bike shops really better than those available at big box stores? (The answer to this question is yes).

Lately I’m hearing a totally different inquiry: Where in the world can I even find a bike for sale?

Dozens of national news stories in recent weeks have featured some variation on a “Bikes are the New Toilet Paper” headline to convey the scarcity of bikes at stores. 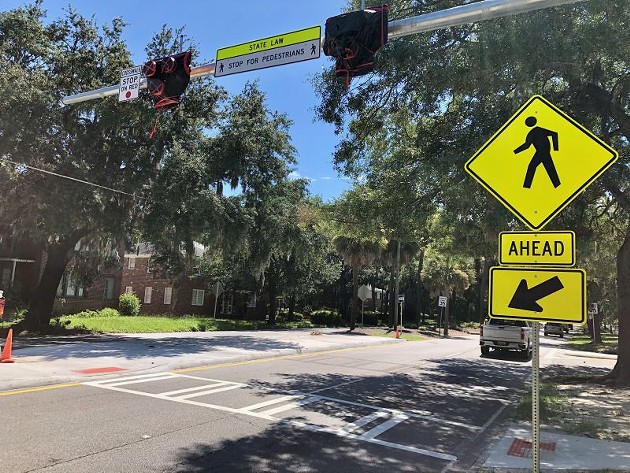 A new pedestrian crossing is being installed on Victory Drive at Cedar Street. Once operational, it will be safer and easier for residents of neighborhoods on the north side of Victory to reach Daffin Park.

What’s behind the increased demand for bicycles?

“Many of our requests have come from people who usually took the bus, but due to the pandemic and reduced schedules were no longer able to. One woman, Frances, could take the bus to get to her shift at a restaurant, but was unable to take it home. Her coworker actually requested a bike on her behalf, helping her regain some freedom and mobility,” she said.

Brown said she has received 176 requests for reconditioned bikes so far during the COVID-19 pandemic and has completed 61 that are now being used by grocery store workers, senior care providers, nurses, emergency services providers, and City employees.

Bikes have been donated from all over Chatham County, including a sizable contribution from 100 Black Men of Savannah, Inc.

“The 100 Black Men of Savannah, Inc. values our ability to partner with organizations that are genuinely making a difference in the Savannah community,” Harold Oglesby of 100 Black Men said. “It was, therefore, a pleasure to team with Bike Walk Savannah to get bikes into the hands of Savannahians who needed them.”

Brown said, “Many requests are coming from East Savannah and Westside, along with quite a few requests from the Port Wentworth area. Many of them are hoping to ride the bike to the nearest bus stop.”

She said she needs donations of bikes in good working condition to continue providing them to frontline workers. To arrange a bike donation, email info@bikewalksavannah.org and include a photo and details about the bike’s condition so its suitability for refurbishment can be assessed. Brown pleaded with people not to leave unsolicited donations at Bike Walk Savannah’s office.

If the bikes are not good candidates for immediate reconditioning, staff and volunteers must devote time and effort to storing or recycling them, thus diverting them away from their primary objective.

In addition to dependable bikes, the New Standard Cycles program also provides helmets, lights, locks — and a more recent addition to the accessory line-up, reusable cloth masks — to all recipients free of charge. Those who wish to make a tax-deductible financial contribution to support the program can do so at https://bikewalksavannah.org/donate/

The other part of the bicycle demand story is being driven by recreational riders. The shelter in place order from earlier this year coincided with a spate of remarkably mild springtime weather and a growing desire for healthy, spatially-distanced exercise.

A colleague in Glynn County described used bikes being purchased immediately after they are listed for sale on Craigslist or Facebook.

Here in Savannah bike shops are seeing large numbers of bikes, which had been collecting dust in garages and sheds, roll in for service.

Yet it’s important to recognize what we are seeing is not just about bikes. It’s about increased demand for safe places for people to get exercise and safe ways to get where they need to go.

While some may have started their daily fitness routines in the early days of the pandemic, even after the arrival of Savannah’s brutal summer heat and humidity, they seem to be sticking with it.

Current guidance does not mandate mask wearing when exercising outside alone or with household members. However, on a recent morning I observed people wisely wearing masks on the Robert Espinoza Running Trail in Daffin Park. There simply wasn’t room, even outdoors, to safely distance with so many folks using the trail.

A new pedestrian crossing, now being installed at East Victory Drive and Cedar Street, will make it easier and safer for residents of Live Oak and other neighborhoods north of Victory Drive to cross the street and reach the park. We need more of these direct and convenient connections to parks, stores, and other everyday destinations.

It’s also imperative to talk with people about how they use these spaces and seek their ideas about making them safe and accessible — during the pandemic and beyond.