Navy veteran has climbed hundreds of beacons all over the country

A 20-year veteran of the U.S. Navy, he guesses he’s climbed between 200-300 lighthouses from the Great Lakes to Florida.  Except, wait a minute. Didn’t the government stop inspecting lighthouses generations ago?

Yes, but that doesn’t stop diehard groups of lighthouse enthusiasts from visiting as many of these coastal beacons as they can to “inspect” them and the scenery around them.

Call them lighthouse tourists. And call Fulton one of our area’s biggest. 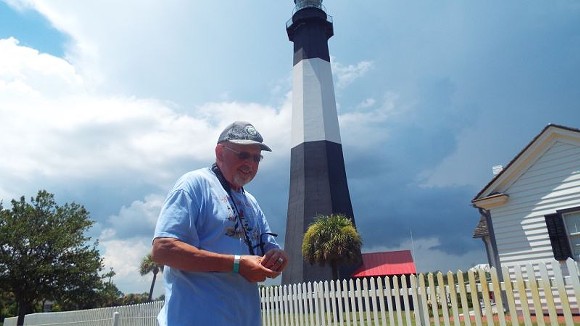 “I just didn’t think of lighthouses as anything but navigation points when I was in the Navy,” he says when we meet at the Tybee Island Lighthouse.

“When I got here to Tybee, it all kind of came to me that, ‘Hey, there’s a lot more than points of light.’”

Fulton wears lighthouse-themed shirts. A miniature lighthouse shines in his front yard. He got married at a lighthouse.

“You just can’t get away from it,” he says. “You want to know every bit of the history.”

It’s not hard to figure out why lighthouses enchant us. The wind-swept ocean views, the romance and danger of sea-faring travel and the rugged individualism of the people who kept them all make lighthouses the stuff of poetry.

“In order to keep these lights shining you had to have these brave people,” he says. “There are many stories about the lengths that lighthouse keepers have gone to to keep their light shining. Because if it’s not shining, you had shipwrecks.”

Fulton himself almost became a wreck on the muddy low-tide slog to Cockspur Island Lighthouse. Despite its 46 feet and nearby location, Georgia’s smallest lighthouse was nonetheless his most difficult “inspection,” bar none. He cut his leg on the oyster beds.

“I never saw such narrow stairs,” he says of the Savannah River beacon, now closed. “There was no railing. So if you took a misstep, you’d fall and probably hurt yourself.”

A bit further afield, Fulton describes his most memorable lighthouse experience as his weeklong volunteering stint on an 18-acre island in Narragansett Bay, Rhode Island. There he worked (a little) at the very photogenic Rose Island Lighthouse.

“I lived on the second deck with all kinds of cool nautical books,” he says, prompting my envy with the words “nautical books.” “It had the most beautiful view of the whole bay.”

Cape Hatteras. Ponce de Leon Inlet. Sandy Hook. It all started back in 1999 when he was feeling depressed and a friend took him on a pick-me-up trip to the Tybee and St. Simons Island lighthouses. From there, a passion grew.

“I tried at the beginning to get a little model of every lighthouse that I had been to,” Fulton says. “But I ran out of space in my display cabinet.”

And after 17 years of climbing, he still has lighthouse goals. He’d like to venture to the West Coast. He’s never been. As for me, I’ll take the easy ones, the ones close by.

And that brings me full circle, to this idea that lighthouses, and their inspectors, are superfluous relics. I would say, in a time when we need hope, inspiration and lessons from history, I’m glad lighthouse people like Bill Fulton are still looking up.

“You don’t absolutely need a lighthouse,” he says. “But it’s kind of comforting when you’re there.”