One word that looks like it will never be associated with “Hardware,” the new solo album from Billy F. Gibbons, is “calculated.”

Far from having a concept for the album, when Gibbons (the singer/guitarist of ZZ Top), drummer Matt Sorum (of Guns N’ Roses) and bassist Austin Hanks arrived at the studio near Joshua Tree, California, that was pretty much the start of the entire project.

“I think the element of surprise is certainly a big piece to this puzzle,” Gibbons said, starting to unfurl the tale of “Hardware” in a recent phone interview. “I received a phone call from Matt Sorum and Austin Hanks. They rang me up from Palm Springs. They said ‘Hey, we’re in our hot rod. We know you’re in Las Vegas. We’re going to scoop you up and squire you over to Joshua Tree. I’m like ‘That’s the desert. There ain’t much out there.’ And they said ‘We’ve found a recording studio that’s willing to open their doors and let us start making loud noise out of it.’

“I was under the impression we were going to take a 30-minute tour,” Gibbons elaborated. “Of course, those 30 minutes turned into 30 days and then we look up and a month had gone by. We walked in and never left. But you know, with blank paper in one hand and a pencil in the other, the only way out of doing nothing is to start doing something.”

This spontaneous approach to writing and recording meant “Hardware wouldn’t have a musical theme. Gibbons’ 2015 release “Perfectamundo” brought a Cuban/Latin-influence into Gibbons’ blues-rock sound, while 2018’s “The Big Bad Blues” lived up to its title with its rough and rowdy songs.

Still “Hardware” sits comfortably alongside the previous two Gibbons solo albums. His snarling guitars and gruff vocal tones, coupled with the wallop drummer Sorum puts into songs like the driving “She’s On Fire,” the heavy and tuneful “S-G-L-M-B-B-R” and the cool and crazy “Stackin’ Bones” (with great vocal touches from guests Larkin Poe) give “Hardware” a rocking grittier-than-desert-sand personality.

Whether Gibbons will do a solo tour behind “Hardware” remains to be seen. For the rest of 2021, he’ll be on the road, continuing what might be considered a 50-year anniversary tour for ZZ Top.

The tour is continuing despite the death in August of bassist Dusty Hill. The band’s long-time guitar tech, Elwood Francis, has taken over for Hill, and Gibbons and drummer Frank Beard released a statement following the passing of their bandmate of 50-plus years.

“We, along with legions of ZZ Top fans around the world, will miss your steadfast presence, your good nature and enduring commitment to providing that monumental bottom to the ‘Top’. We will forever be connected to that ‘Blues Shuffle in C.’ You will be missed greatly, amigo.”

The band’s history is chronicled in the recently released documentary, “That Little Ol’ Band from Texas,” during which Gibbons, Hill and Beard take viewers through ZZ Top’s 50-year history. The film, directed by Sam Dunn, hits a lot of highlights, including how the group got its distinctive high-powered bluesy rock sound and their initial commercial breakthrough, moves onto the 1980s, when ZZ Top incorporated synthesizers and sequencers into their sound and hit a commercial grand slam with the 1983 album, “Eliminator,” before reaching into the band’s more recent work.

Early hits such as “La Grange,” “Tush” and “Cheap Sunglasses” helped propel ZZ Top to stardom in the 1970s. The group stayed popular into the early 1980s, when a convergence of factors – the arrival of sequencers and other recording tools, the debut of MTV (which aired the groundbreaking videos for the hit songs “Legs,” Gimme All your Lovin’” and “Sharp Dressed Man”) and some inspired songwriting – made ZZ Top mega-platinum superstars (with Gibbons and Hill debuting their newly grown outsized beards).

The makeover in the ZZ Top sound wasn’t planned.

“We stumbled into the control room, and here were these new contraptions,” Gibbons said. “We had a habit of ignoring the user’s manual. We just started twisting knobs and somehow that’s what worked.”

While ZZ Top will be busy touring through the rest of 2021, the band may find time to finish a new studio album as well.

“One of the offshoots of the (“Hardware”) record project process, I was able to funnel some of the song ideas we were coming up with in the desert, all the way from California back to Texas,” Gibbons said. “Somewhere in the flight, these little tidbits ended up in the laps of Frank and Dusty, and they said ‘Hey man, we can start weaving these together with the ZZ Top sound behind it,’ which was the bonus that came my way was I got to leave one studio and tiptoe into the next one.” 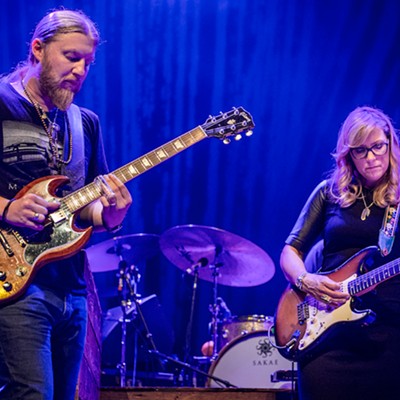