I had planned this visit for a week - in anticipation of a home cooked meat-n-three plate. Beef and peppers maybe, or chicken.

"The cook is out sick today," I was told. "We're just doing sandwiches and salads."

I started to leave, but spied the sizzling flattop. Sometimes, there's nothing better than a fatty ground beef patty fried in its own grease. Yeah, old school burger and fries.

I grew up down the street from one of those joints. The burgers were wrapped in wax paper and sent out in a plain brown paper sack - which usually broke open from the dripping burger grease before I could get it home.

And while this one didn't measure up to that memory, it was still damned satisfying. So much so, that I wonder if the proprietor oughta just go carryout burger joint and ditch the pans of stewed meats and steam table veggies.

The patty itself was cooked well done and oozing hot juices, which had slowly soaked into a toasted, sesame seed bun. Freshly cut tomato and crunchy, torn lettuce were my lone toppings - along with a couple of packets of squeeze mustard.

An original Star Trek episode played on one of the TVs. I was having flashbacks. Spock would find no logic in a frozen hamburger patty. Damn those emotionless Vulcans!

The fries were typical frozen fare - but, thank God, no breading, seasoning or otherwise junked up New Age potato product. I noticed that chicken strips were being hand battered.

Overall, the line cooks kept it real, kept it authentic. I've gotta respect that - and the fact that they know their boundaries. I'll go back for meat-n-three - but will be tempted to get a burger.

At Narobia's it struck me what a total foodie corridor Habersham Street has become.

Anchored on the north end by B. Matthew's Eatery and on the south end by Bar+Food, the entire length of Habersham Street offer upscale dining, casual dining and dive joint charm.

Al-Salaam Deli is a favorite, Sol taunts us with Southwestern spice. There's pizza, pastries and pasta; ice cream, cheesecake and foie gras. Some are mom-n-pop's, others are franchises; there are institutions and newcomers.
Next time you're cruising, start at one end or the other and count 'em yourself - I think you'll be amazed.

That's the model that Philip Brown has in mind for his Starland Design District-based PERC. Brown, a 16-year veteran of Jittery Joe's of Athens, has brought his mad roastin' skills to the Hostess City - where he's landed some devoted restaurant customers.

The dude's a good roaster and a wealth of coffee info that he willingly shares with new-found disciples.
You can buy his beans at FORM, or stop by the shop on DeSoto Street, across from wine merchant Christian Depken at Le Chai.

Need bubbly for NYE? Christian just finished his annual show of very small, French champagne producers. These are remarkable, hard-to-find bubbles sure to make you look like a rock star instead of old man last year. Cheers! 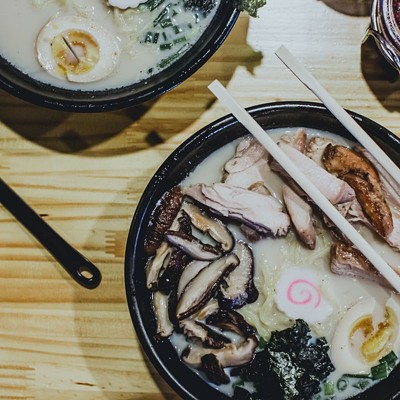