Celebrate Pillars of Ash at the Jinx on Saturday

On Friday, Black Tusk posted an Instagram photo: a Jim Beam bottle emblazoned with a portrait of late bassist Jonathan Athon, perched on a guitar cabinet.

“Look who came to celebrate the release of Pillars of Ash today!” @tcbt captioned.

The metal world’s been awaiting Black Tusk’s 2016 LP; as every piece of national media inevitably leads, it’s the band’s last recording with Athon, tracked before Savannah lost one of its most vibrant, beloved residents in a tragic motorcycle accident.

Recorded by Toxic Holocaust’s Joel Grind, Pillars of Ash confirms that, if there’s any common theme to Black Tusk, it’s that the band is damn near unstoppable, both in blistering sound and spirit. Their fourth album in a decade-long career, Pillars is front-to-back solid bangers, “party metal” at its finest.

Black Tusk is, and always has been, a triangle, dependent on its three key components to stand strong. James May’s brutal drumming charges throughout the thing, the vibrations of Andrew Fidler’s guitar shake everything in its vicinity to disintegration. Athon’s bass acts as the all-encompassing anchor, rounding out the trifecta’s heft. 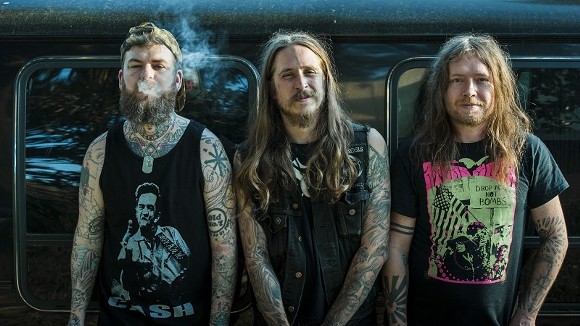 When Connect spoke with Black Tusk this past summer, May noted that Pillars was a return to a more natural state of songwriting.

“On this album, whenever we felt like a song was done, it was done,” he said. “Even if it was two minutes long, or like, a minute and forty-five seconds.”

That lack of self-monitoring—beef up this, cut that—shows. It feels true, honest and immediate.

Fidler and Athon’s alternating vocals move songs like “Desolation in Endless Times” along at rapid-fire pace. Fidler’s is relentless, brash, a paint-peeling cadence; Athon’s a deeper, growly, commanding declaration. Their exchanges are the most metal seesaw ride around, their mere vocal endurance admirable: never fatigued, each verse is as raw and impassioned as the last.

This is as swampy as it gets, but it’s not that languid, steam-rising-off-the-marsh sound. These are the height-of-summer sounds, when the heat index pushes you beyond your limits, when the sweat can’t be wiped clean, when the dust and grime adheres to your skin and there’s no cleansing it. This is the buzz in your skull when you toss and turn under the sheets, when open windows offer no respite. It’s Savannah.

Therein lies the original beauty, the dark, wet, throbbing heart of Black Tusk: it’s rock ‘n’ roll composed by kids who grew up playing house shows, who learned on the fly and hurled each other in a churning circle pit upon first introduction.

These are basslines crafted by a punk guitarist who taught himself bass in a month’s time. Every track on Pillars of Ash feels written to be played live, to engulf an audience, to entertain and engage.

Corey Barhorst of Niche and Kylesa has fit beautifully into Black Tusk as bassist. Athon left behind pages and pages of Black Tusk tablature, but Barhorst has brought his own flavor and years of experience to the table, and is a wonderful addition to the live show.

The boys return home to celebrate the record’s release, bringing a stellar lineup of openers with them: Royal Thunder, Savagist, and Bask.