Marcus Kenney
The partners behind The Grey, John O. Morisano (left) and Mashama Bailey, have published a new memoir, 'Black, White, and The Grey'.
A new memoir by the co-owners of one of Savannah’s most praised restaurants reveals that success stories are not always black and white. The Grey restaurant in downtown Savannah is a stylish reinvention of a formerly segregated, Art Deco-styled Greyhound bus station originally built in 1938. Since opening in December 2016, The Grey is now an internationally acclaimed restaurant recognized for its impeccable cuisine of the American South by co-owner and Executive Chef Mashama Bailey. In 2019, Bailey and co-owner John O. Morisano (known as “Johno”) won the James Beard Award in the Best Restaurant: Southeast category. To outsiders the restaurant may appear to be an overnight success, but in Black, White, and The Grey − the memoir jointly written by Bailey and Morisano and released in mid-January – the co-owners share that the establishment of their accolade-enamored restaurant was not all peaches and cream. Besides the expected difficulties that Morisano, a media entrepreneur, and Bailey, a former sous-chef, experienced with teaming up to start a restaurant with no prior experience in running a kitchen, the business partners encountered challenges that they were unprepared for. The memoir is not your average “foodie” read. During a virtual forum hosted on Jan. 18 by E. Shaver, Bookseller, Bailey, a Black chef from Queens, New York, and Morisano, a white media entrepreneur from Staten Island, plunged into a discussion confronting biases of race, gender, and culture, telling the tale of how they went from tentative business partners to dear friends while turning a battered old bus station into a highly revered eatery.
click to enlarge 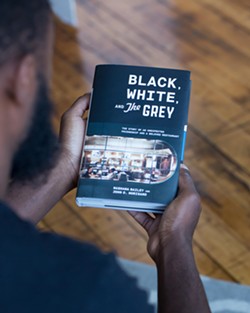 Ten Speed Press
A copy of the new memoir, 'Black, White, and The Grey'.
During the virtual forum, Morisano mentioned that he introduced the idea to write a book about The Grey years ago. Bailey was initially unenthusiastic about this, since they were still striving to get their new restaurant off the ground, yet she encouraged her partner to write the book himself if he wished. After presenting a complete manuscript to several interested publishing houses, Morisano chose Lorena Jones Books as the publisher, who suggested that Bailey add her own experience to the manuscript. Assuming that the process would be simple since the work was mostly done, Bailey agreed, bringing about a turn of events that made the book what it is today. “When I handed her the manuscript I put a helmet on and waited for the fallout, because they were conversations that we had never had,” Morisano said. Bailey recalls feeling a mix of negative emotions upon reading Morisano’s perspective of their surrounding environment. “I was angry when I read the first manuscript,” said Bailey. “This was a book that our relationship wasn’t ready for, because we never really discussed the nuances of race between us.” According to Morisano, when Bailey inserted her ideas into the manuscript, the book transformed from being about a guy opening a restaurant to the experiences of two partners running an eatery − and because they were of different races, issues of race became a central concept in the work because of their different perspectives on life in the South. “I had to push myself to be vulnerable because I didn’t want to have those conversations,” said Bailey of the memoir’s revision process. “I kind of just wanted to write ‘F you’ on every page.” Morisano said that when he and Bailey started working on the book, he had no idea that it would grow legs and teeth and contribute to the conversation of social and racial justice occurring during an era when issues of racial disparities have been highlighted nationally, including the impacts from the killing of Ahmaud Arbery in nearby Glynn County in February of 2020.
click to enlarge 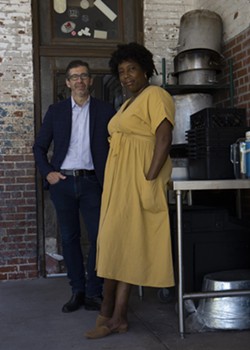 Marcus Kenney
The partners behind The Grey, John O. Morisano (left) and Mashama Bailey, have published a new memoir, 'Black, White, and The Grey'.
Furthermore, Morisano came to recognize that the book’s conversation about racial biases hit closer to home with some experiences that he encountered with Bailey at The Grey. He discussed a rude awakening as to how deep the problems can be while recalling a time when he went to a table to ask a group of white patrons how they were enjoying their meal, and was met with an unexpected response about a new watermelon salad that Bailey had prepared. “‘Y’know, us crackers don’t usually go in for this, but when one of them makes it,’ and he points toward the open kitchen at Mashama, he’s like, ‘it’s just so damn good.’ And he looks at his wife and says something like ‘you know how they love watermelon,’” Morisano said of the scene included in the memoir. “I was just flabbergasted, absolutely flabbergasted, because I had prepared myself for a negative guest experience, getting yelled at, hating the food, but I was not prepared for that at all.” Shocked, Morisano remembers that he ran around the outside of the restaurant and through a door to the kitchen to relay the experience to Bailey, who responded, “We’re in the South. Is a bigoted redneck really shocking to you?” Morisano said he felt guilty for not defending Bailey’s honor, but in conversations following the encounter, she said she’s just glad that Morisano can now see the depth of this issue and understand it for himself. “For this person to come in there and act like that, I was like, ‘Goddammit.’ You know it’s there, you know we’re Americans in this liberal city in this small pocket, and you just kind of hope that no one has the guts to come out and tell you exactly who they are,” Bailey said of the bigoted restaurant patron. “I wasn’t hurt, I was just disappointed in the fact that he was even in this space. Like, you’re not welcome here, don’t come here.” Reflecting on their own realizations discovered while telling their story, Bailey and Morisano see Black, White, and The Grey as an opportunity for readers to recognize their own biases. “Mashama and I think we have a point of view that we wanted to share with the public, and we could have been successful at that or we may have failed at that, but that’s just the risk that everybody takes when they put themselves out there, whether you’re a writer, or an artist, a chef, a restaurateur,” said Morisano. Black, White, and The Grey is available at Savannah’s E. Shaver, Bookseller store and online in hardcover and paperback. Visit thegreyrestaurant.com for more information.