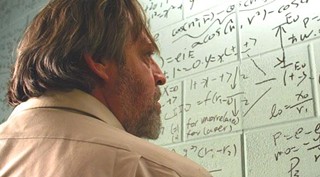 For his senior thesis, Colin Levy created The Secret Number, a short film that takes the conventions of time, space and mathematics and turns them on their heads.

Levy, who graduated from SCAD in May, won the Savannah Film Commission Award at the 2010 festival for his short En Route.

Once The Secret Number was completed, he moved to Oakland, Calif., to begin a year–long residency with Pixar Animation Studios.

“I applied like anyone else,” Levy explains, “but I had a portfolio that I guess impressed them.”

The Pixar principals were apparently taken by a 3–D animation short Levy had made between his junior and senior years at SCAD; likewise, both En Route and The Secret Number were part of his submission reel.

“Some people come out of the visual effects program and they’re doing lighting, or shading, compositing,” he says. “I am in their Camera & Staging department. I’m still trying to figure out how to describe it to people, but it’s basically cinematography for films that take place in a virtual world. There’s a difference between stereoscopic 3D and 3D. It’s like placing cameras, figuring out compositions, shot design. So there’s a lot of exploration that happens.

“We’re handed storyboards and then we explore and actually shoot – in a computer, virtually – the movie. It’s a lot of fun. I am exercising my filmmaking muscle when I’m doing that.”

The Secret Number takes place in a psychiatric ward, where a brilliant professor of math - Dr. Ersheim - has been admitted because of his erratic behavior. And he’s been trying to tell people, for years, that there’s an “unknown integer” between 3 and 4, which her calls bleem.

Therefore, he’s in the loony bin.

And wardkeeper Dr. Tomlin has daily talks with the old man.

“During the course of these conversations, Tomlin realizes that there’s some sort of inexplicable link that exists between him and the professor,” Levy says. “It’s just that he keeps having these memories, back to a time when he was younger.”

Unlike En Route, which also dealt with the passage of time and its relation to memory, The Secret Number isn’t easy to understand.

Even for the 23–year–old filmmaker himself. Levy admits the short is “obtuse,” in a manner of speaking.

“By the end, he’s finally cracked the code. He’s made the leap, mentally, and figured out the bleem theory. And in some way, he’s able to access another dimension, and he slips back in time. That’s the reading I have.

“I realized there are a lot of similarities between En Route and this film. It even ends with a very similar reveal shot, and that kind of bothers me a little bit. But I guess I like shorts that have little twists to them. I like playing with time. I love Memento, and Back to the Future, too. I’ve always been intrigued by that kind of concept.”

Should The Secret Number take the honors at this year’s competition, Levy won’t be at the ceremony – two of his film’s producers are planning to attend.

Pixar is keeping him busy. When his year is up, he says, “They could decide that they’ve had enough of me and send me on my way. If that’s the case, that will be totally great because I have other things that I could do. And having even one year at Pixar is just an incredible privilege and experience.

“But they could also bring me on, and that’s sort of what I’m hoping will happen. I do have directing aspirations, but this is an amazing environment, and I feel like I’m getting better as a filmmaker and as an artist. And I’m not going to stop learning.”