#BLESS this House of Gunt 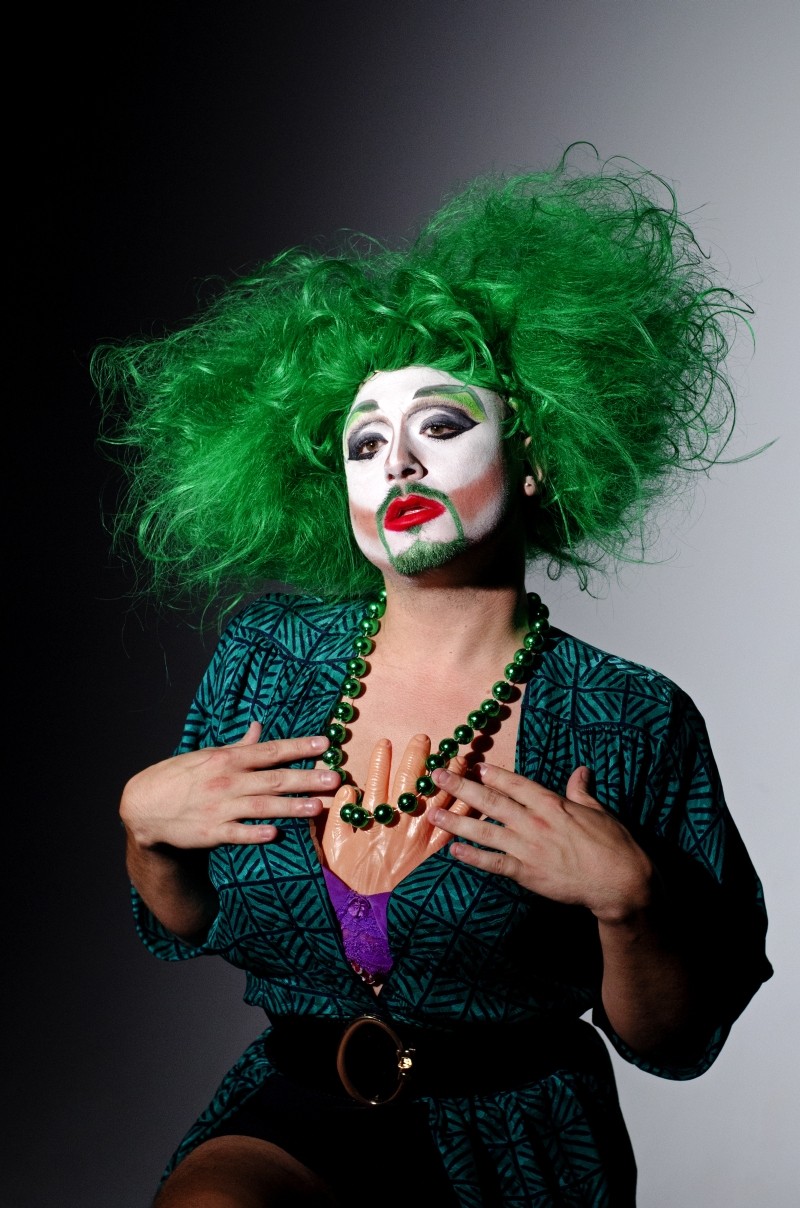 IT'S NEW YEAR'S EVE, and Max Arnzen is carefully shaving off the top of a purple Elmer's gluestick with a dinner knife, sweeping the tacky stuff over his eyebrows. He works quickly and meticulously, brushing over the school-supply base with a light powder.

The roar of a hairdryer locks it in, heating the glue through the powder to smooth and set. Arnzen’s Influenza Mueller, alongside House of Gunt collaborator Anita Shavé (currently adhering glitter to her beard), are about to bid farewell to a whirlwind 2014 and welcome a new year for the drag collective.

Performers Raine Raine and Toyota Mitsubishi join us around Arnzen’s dining room table, which is covered in a multitude of makeup palettes, brushes, and supplies, to take a look back at the House’s successful 2014 and their Jinx debut. 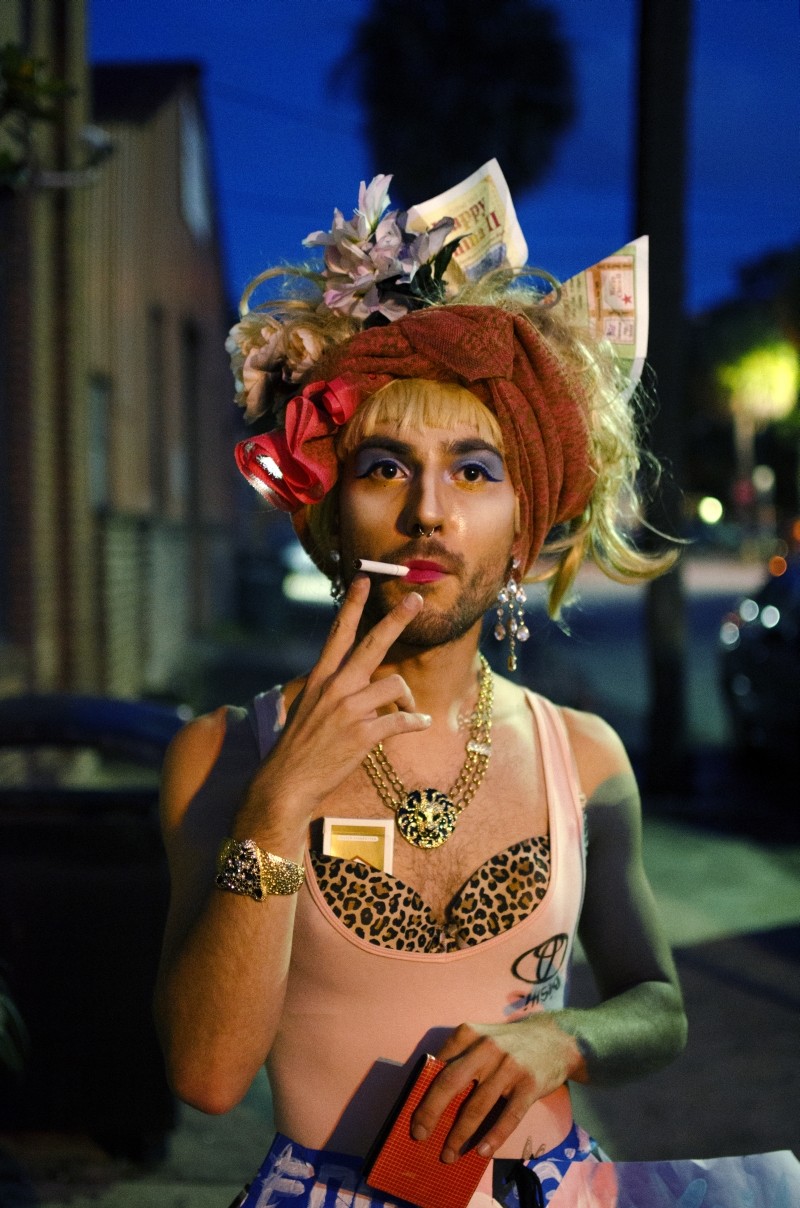 House of Gunt is still young, but the troupe (now roughly 16 members strong) has grown beyond what any of the founding performers could imagine.

“Patrick [House of Gunt’s “Soccer Mom”] and I had thrown around the idea of drag, but never took it seriously,” co-founder Arnzen explains.

While checking out the drag scene in New York, they encountered a “very beautiful, Marilyn Monroe-looking queen,” Arnzen remembers. “

This Monroe, however, just happened to be covered in tattoos and flaunting exposed chest hair. It was the lightbulb moment. 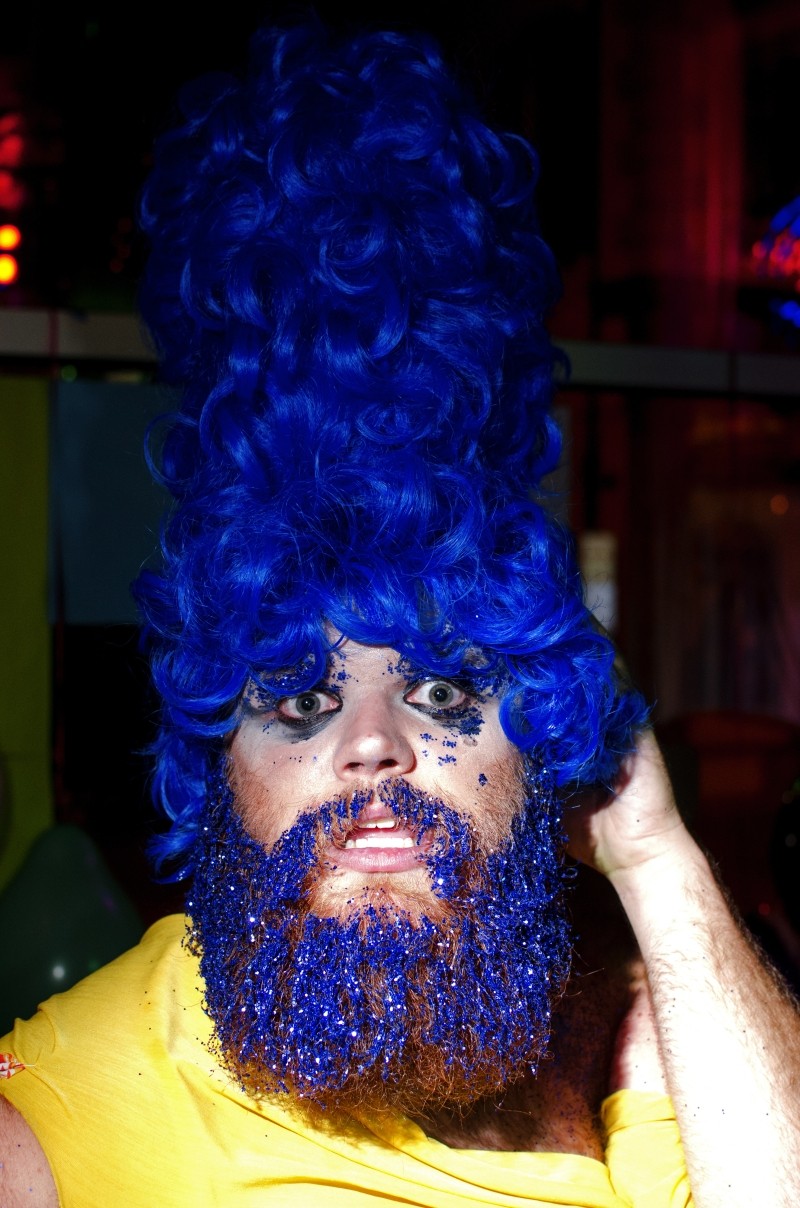 Dave Spangenburg
Anita Shave: the blues look good on you!

“They were embodying a different form of femininity,” describes Arnzen. “They’re feeling it; they’re not necessarily flawless, in a way. We started to see all these different drag queens who are screwing with all the stereotypes, and we were like, ‘We can totally do this in Savannah.”

Founded in late 2013, The House of Gunt is a collective, a movement: it’s a band of performers – many of whom began as amateurs – dedicated to subverting the subversive.

”We all know our herstory,” Arnzen says. “Drag isn’t totally new in itself. We’re trying to jolt this community that’s already used to gender performance.”

The feminine ideal that defines a lot of drag ain’t a priority around here. Chest hair proudly peeks out of skin-tight tops. Green locks frame coordinating eyebrows and manicured moustaches; beards are tangled in glitter and confetti.

“The initial thing was just being allowed to be insecure about the way you look and celebrate that,” says Arnzen. “Our biggest hurdle is, you want to shock people who are used to seeing men in wigs and heels. You know you’re going to have people who say, ‘Oh, that’s not a drag queen.’ If that’s the thing that bothers people the most, so be it.”

Perhaps their most brazen move?

“One of the biggest things was like, hey, we got a real woman!” says Arnzen, smiling over at Raine. “Deal with that! How you gonna wrap your mind around that?!”

“It’s a good question – and one you should keep asking people,” Raine says sagely.

Instead of being adopted by a Drag Mama, as is tradition in many circles, most Gunties learned (and continue to learn) about costuming and performance through Internet culture.

“We’re getting all our cues from scrolling through Tumblr and learning that way,” says Arzen.

Of course, they also have formed a family, learning from each other every step of the way (and sometimes researching a particular eyebrow tutorial on YouTube together).

It makes the name of their latest show, #BLESS: A Transdenominational Experience, all the more relevant. The plan is to convert The Jinx, perhaps the largest venue they’ve performed in, into a megachurch.

“The idea is, we’re welcoming all different kinds of church activities,” says Arnzen. “There’s a cult, Satanism, there’s good ol’ Christian values onstage. There’s all these sort of different ideas, and I think that’s why the hashtag works. If you open up a hashtag, you get all these different results from all over the world. It’s sort of this weird democratization.”

As for the “transdenominational experience: “I read that on a truck stop poster,” Arnzen laughs. “You can go to church when you’re pulling over on the side of the road, and the word they had to describe it was ‘transdenominational,’ which I thought was really cool.”

Arnzen’s occasional character, Appalachia Judd, will make an appearance (she was banned from her megachurch and is trying to make right); she’ll open in prayer and serenade the crowd with an original song: “What If Gunt Was One of Us?” Shavé pays tribute to a classic Fundamentalist episode of Wife Swap. The newest Gunt member, Inertia Bazaar, will be indoctrinated into the collective by baptism. Plus, two of Atlanta’s Village Queens are trekking down for the event.

Arnzen notes that #BLESS isn’t complete irreverence: “We really are happy, and blessed, that Gunt has survived so long,” he says. “’It’s been over a year now, so I think that’s something to be happy about.” 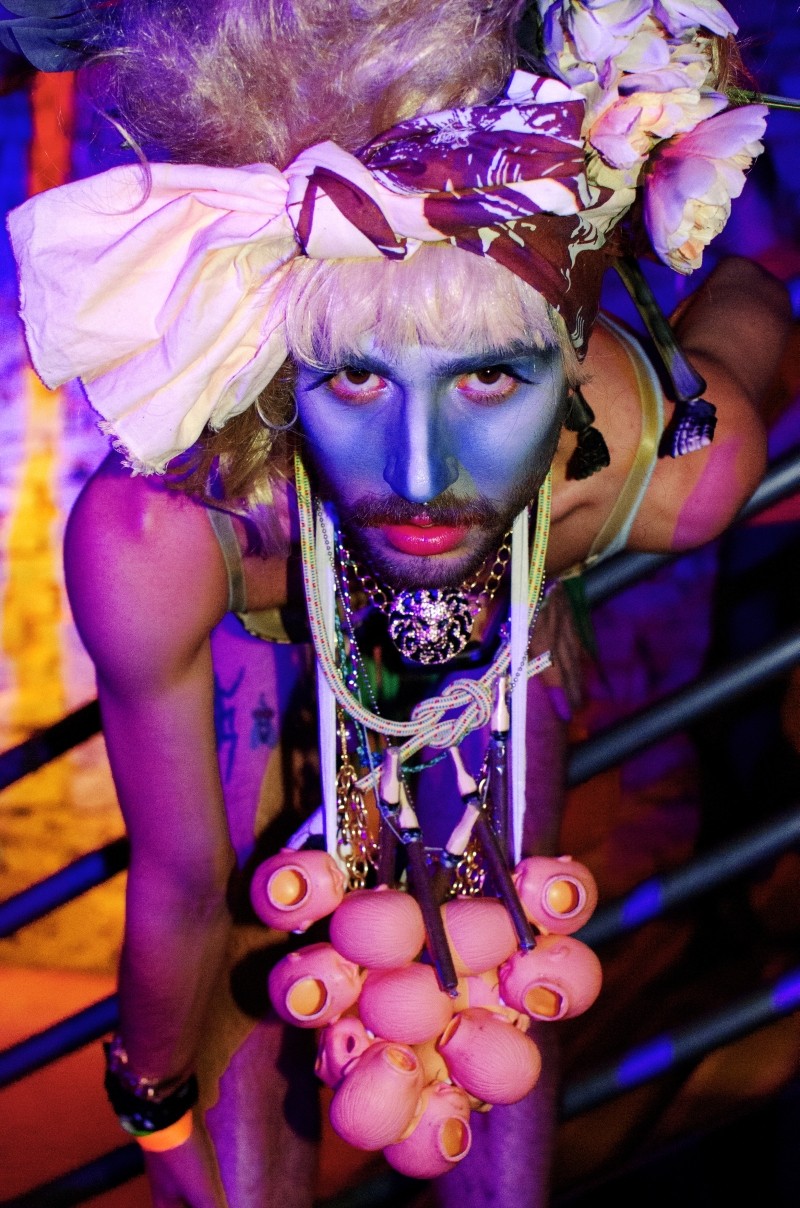 Dave Spangenburg
Toyota Mitsubishi knows that two, three, a dozen heads are better than one.

“I mean, I don’t know if I thought there was a future,” Mitsubishi says. “We did a house show, and then the next show was at a bar, and we were like, ‘This is real?!’”

“Back then, we were doing it without any expectations,” adds Arnzen. “I was wrapped in a shower curtain and had chocolate syrup and we were like, ‘Oh, who cares?’ We didn’t really think what was going on. Just like, ‘We’re here!’ We pretended like it was our house.”

Thoughout the collective’s growth, House of Gunt has made a point to not lose that spark of spontaneity and improvisation.

“It’s really less about choreography,” Raine explains. “You get onstage, and you end up doing whatever is happening in that moment in your head – it’s way more entertaining for me.”

“Interacting with the crowd is really important,” adds Mitsubishi. “Sometimes I’ll plan something and get onstage and say, ‘forget it, it doesn’t even matter.’”

Improvisation is sure to define their newest endeavor: Drag Brunch at Ampersand, which starts Sunday, January 11.

The restaurant/bar posed the concept of Drag Brunch, but the Gunts fill in the details, maintaining artistic command over the event. And the House wouldn’t have it any other way.

“That’s kind of the deal breaker for us,” Arnzen says. “If any place wants us to sign a contract – say no. We take a lot of pleasure in being able to go where we want to go.”

With that kind of brazenness and bond, there really isn’t anywhere they can’t go.