Blood Wrestling at the Jinx

The Jinx’s annual bloodbath is back again, and this time, the ladies of Blood Wrestling are out for revenge!

This year’s roster boasts both old rivals and fresh meat. With a year to train (some girls opt for a coach/manager, often a friend or co-worker, to help them prepare), the ladies have devoted themselves to the art of bringing the pain to the Jinx’s stage.

Geoff L. Johnson
MISS MARY SMACK DOWN: Born and raised at a junkyard in Reno, Nevada. “Don’t go crying to your mommy after I spank you in front of all these people!”Calling it now: Miss Mary Smack Down is this year’s dark horse. Think Clint Eastwood in Unforgiven. Think Rocky if Rocky kicked ass in 2011, had a baby, then decided to hop back in the ring. Three years ago, Miss Mary was Blood Wrestling’s champ, decimating her opposition in a legendary match. Watching Routh’s iron fist rule for two years, she had to throw on the spandex and take back what was hers.

An honored tradition for the past 10 years, the brawls take place in a kiddie pool filled with gallons of warm, thick, homemade blood, boiled with care by the Jinx staff. The slickness makes it difficult to get a good grip on one’s opponent—front row observers are pretty much guaranteed to look like they walked out of Carrie’s prom by the end of the evening. There are some dismembered body parts floating around in the roily fluid that the girls can use to beat their opponents into submission, but the true secret to victory, former wrestlers reveal, is a complete surrender into those engrained, survivalist instincts.

Though, in the past, the event has primarily been a Vinnie Van Go Go’s versus Mellow Mushroom employee showdown, some of this year’s competitors have moved on to new jobs, but the hatchet ain’t buried. Routh the Ripper has held the winner’s tiara, championship belt, and highly-coveted bragging rights for two years running, but she better have tripled her prep routine for this year—her opponents are out for blood, and it’s going to be a blast to see them tough it out.

Geoff L. Johnson
ROUTH THE RIPPER: Hard as fuck, from parts unknown. Reigning champ Routh is back in the ring to protect her title. A lithe gymnast with arms of steel, the girl is ridiculously strong, delivers a terrifying, “is someone checking to make sure that girl’s still breathing” smackdown, and also happens to be an expert in the art of the crazy eye, searing and shaking up her rivals with a glare that’s all daggers and unpredictability.

Though Connect wishes all the ladies success, we gotta say it would be really entertaining if Saturday comes down to vets Miss Mary Smack Down and Routh fighting head-to-head.

Savannah Sweet Tease girls will keep the crowd entertained while the wrestlers catch their breath. If you missed their newest show, Night of the Terrifying Teases, last week, you clearly made a grave mistake, but not to worry—they’ll be performing select acts from the show on Saturday evening, as well.

Geoff L. Johnson
HULK HERGAN: Born and raised in a sweat and chalk-ridden gym, she wants to make people cry for their mothers and break them down to where they have nothing left! It may be her first blood wrestling rodeo, but Hulk is no pushover. Trained to dominate a lacrosse field, her intensity and brawn are sure to make even the most seasoned blood wrestler whimper. Hulk is about to be thrown right in, as she faces reigning champ Routh in the second bout.

This is, unfortunately, the first time in years that beloved psych-rock band GAM is unable to play Halloweekend; however, our hometown-bred, world-touring power trio Black Tusk are a killer replacement. 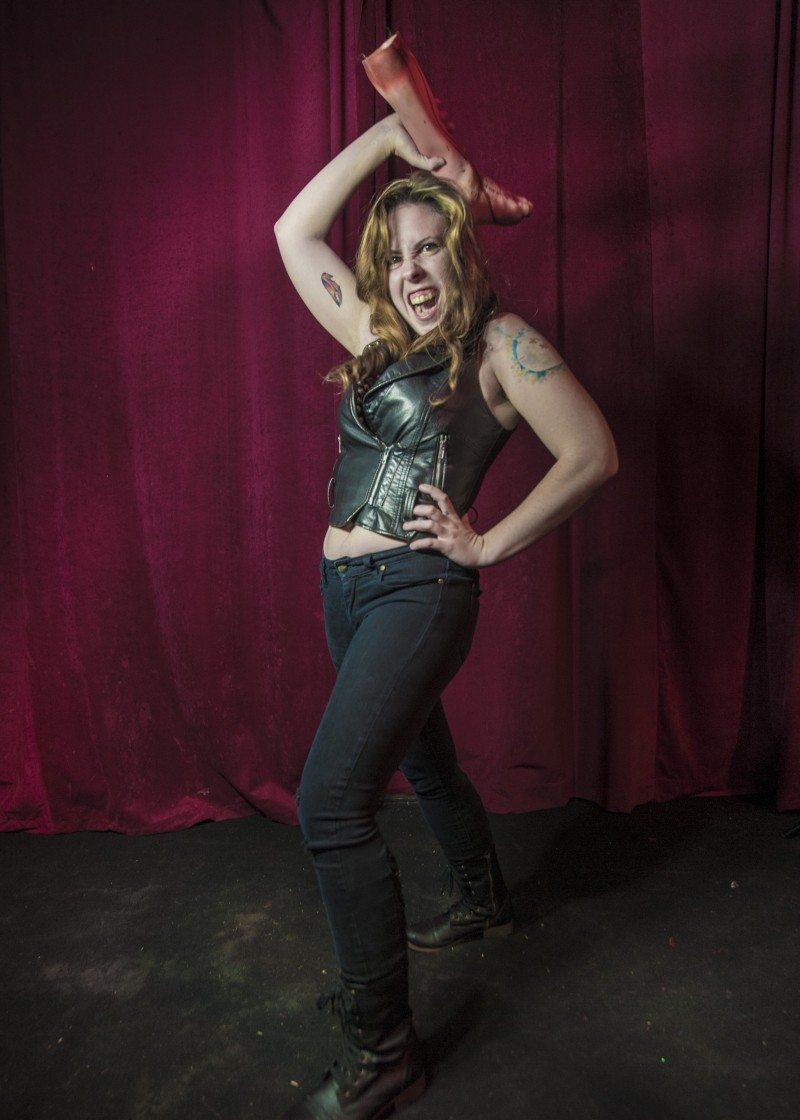 Geoff L. Johnson
TORA HYMENOFF: Bred on the streets of Brooklyn, this Holyland babe is ready to Mazel Toss anyone who stands in her way! 2014 marks Tora’s second time in the ring; she put up a fierce and wildly entertaining fight against Routh in last year’s brawl as Beetlejew. This year, she faces off against seasoned wrestler Miss Mary Smack Down in the first bout. While hush-hush about her strategy (she’s kicked up her workout routine and has been practicing some moves with her manager), she promises that if she makes it past the first round, she’s giving Routh a run for her money, and won’t be going down without a tooth-and-nail fight!

Hot tattooed chicks wrestling in blood, terrifying and tantalizing Teases, and local boys playing world-class metal? Only in our happily little weirdo town, and only at The Jinx.