Blues you can use 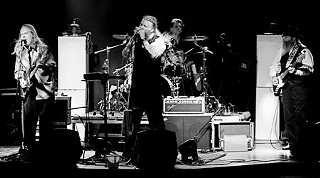 Ace Andersson is a native Swede – he’s been in the States for 10 years - who wears a blonde beard so long he could pass for a member of ZZ Top. And he lives in a North Carolina town called Lizard Lick, which got its first traffic light in 1997.

All well and good, you might say with a dismissive smirk, but what has Ace Andersson done for me lately?

Andersson is a ferocious blues harp player with a red-hot band called Jubal Kane, and he and his bandmates have chosen Savannah to record their fourth CD.

There’s sure to be sweat dripping from the walls when Jubal Kane takes over the Mercury Lounge Friday and Saturday. Each night, the band – using different drummers - will play for four hours without a break.

“You can never get the same energy as you do in front of people, when you’re standing around in a studio,” Andersson explains. “And there’s nobody really recording a hundred percent live any more. That art form is pretty much dead with Pro Tools. There’s always an overdub on a record, whether it’s a clinker, or they think they can make the solo better, or the vocals …

“We are just a throwback. We refuse to do overdubs. The way it goes, that’s the way it is.”

Although they write a lot of their own songs, they draw from a trunk-load of smoking cover versions, too (including Tony Joe White’s “Polk Salad Annie”!)

“We do a version of “Going Down,” and we listened to it one time in the van before we first went onstage and played it. We listen to it to get our bearings, and then we’ll do it to see how it works out.”

For the original material, “I might come up with a riff and I’ll say ‘Can we do something with this?’ I’ll play the riff, and they just fill in the holes. We have this ESP where it just works when we play together.”

The band’s name comes, in a manner of speaking, from the biblical Book of Genesis:

“He was,” says Andersson, “the first musician ever referenced in any kind of writing, as far as we know. He’s part of that Cain and Abel clan, that whole family. His brothers were doing weapons of war, and he felt like he should do something else. Something better for his family. And God told him, you can be a musician. He was actually the first harp player, but not the mouth harp, the stringed harp.”

The band is hoping to cut a live DVD at the Mercury Lounge shows, although details are still being worked out.

Ultimately, the recordings will be a two-CD package, with one disc of original Jubal Kane songs, the other of covers.

“Savannah’s always been good to us,” Andersson says. “I personally love the town. I think it’s one of the coolest towns on the planet.

“We’ve got a good fan following from it, and the Mercury is a cool club. We enjoy playing there – it’s our favorite club at the current time, and that’s why we wanted to record it there.”