Famed guitarist on the old Night Flight, life on the road, and his new CD 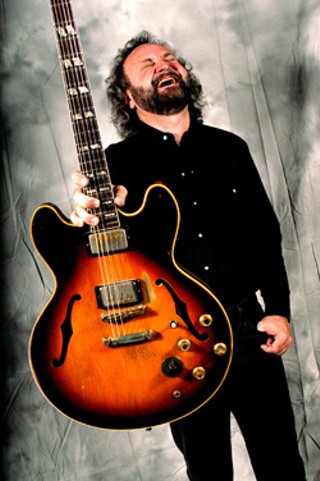 TINSLEY ELLIS JUST MIGHT BE the baddest-ass blues-rock guitarist you've never heard of. Yet the fact he's not a household name (except of course, among the kind of folks who keep up with badass guitarists) doesn't exactly keep him up at night.

“I don’t really pay much attention to whether I’m famous or not,” says the 50-year-old frontman. “I’m happy to have never had a day job since the ‘70s. That’s my definition of success.”

With the talent, drive and bare-knuckled determination to forge an enviable career for himself in the often cutthroat world of contemporary blues music, Ellis hasn’t had to resort to punching a clock or showing up suit-and-tied at a straightlaced office gig — but in many ways, he’s worked much harder than most folks who hold down such reliable, standardized jobs.

His life is one of evening gigs in smoky clubs, theaters and the occasional afternoon set at an outdoor music festival. It’s filled with the kind of white-line fever that can only come from playing an average of 150 road dates a year both here and abroad. And for close to three decades, that’s the only life this journeyman songwriter and string-bender has known.

Whether he’s headlining his own dates, sitting in with heavyweight artists like The Allman Brothers, Robert Cray and Koko Taylor, or releasing a dozen critically lauded albums on such esteemed blues labels as Alligator Records and Telarc, Ellis is the real deal: a solid sender who’s based his life around writing, playing, recording and delivering his own stinging, combustible take on hard, guitar-based Southern R & B.

Just don’t limit him as an artist by pigeonholing him into one narrow genre.

“To be perfectly honest,” he says candidly, “I consider myself to be more of a blues-rock act than a straight-up blues act.”

When asked if he’s ever considered shifting his focus even further from blues into the rock world, his answer essentially renders the question moot.

“The style of guitar that I play fits in equally well with Buddy Guy or Widespread Panic, two acts that I have played with quite often. ‘Nuff said.”

And therein lies the unique appeal and welcome dichotomy of Tinsley Ellis: he’s equally at home alongside one of the finest and most influential “straight-up” blues guitarists who’s ever lived, as well as among jam-band royalty, whipping out extemporaneous solos and counterpoints that mesh relatively seamlessly with that Athens group’s organic, free-range improv-rock.

Crowned by one magazine as “the most significant blues artist to emerge from Atlanta since Blind Willie McTell,” (a hyperbolic mantle if there ever was one, yet an arguably accurate assessment), and compared in print to the likes of Clapton and Santana, Ellis found himself warmly welcomed by Savannah music lovers from the start of his solo career in the late ‘80s, and earlier, as lead guitarist in the popular regional bar band The Heartfixers.

“My most memorable shows in Savannah were at the Night Flight Café on River Street in the early ‘80s,” he recalls wistfully. “The Heartfixers shows I did there with ‘Chicago’ Bob Nelson, John Hammond and/or Nappy Brown stand out as some of the best blues music I’ve ever been a part of. It was a really magical time for me. I was in my early twenties, making a name for myself in the music industry and partying my ass off, all at the same time!”

His upcoming gig at Live Wire Music Hall (a brand-new, upstart venue which claims the widest range of both original and cover acts in town) finds Ellis playing only a few doors down from the sorely-missed Night Flight’s former location. It’s his first local show since headlining the Roundhouse Blues & BBQ fest years ago.

He’s supporting his latest Alligator CD, Moment of Truth, a slashing collection of icy guitar licks, snarling vocals and in-the-pocket grooves that many are calling his finest work to date. That comes on the heels of his highly successful “best-of” concert disc, Live — Highwayman. Ellis says his setlist this weekend will include every song from that live CD, tracks from his latest, and new, as yet unreleased tunes.

And, although Live Wire (whose owners need to pack the house for this pricey booking) is smaller than many of the clubs he regularly plays, the bluesman says the close quarters won’t throw him at all.

“My eyes are closed most of the time while I’m playing, so I’m often unaware of the size of the venue,” he says with a smile.