THESE DAYS, Bob Dylan is an institution – or as Malcolm Burn says, a “national treasure.” In 1989, however, Dylan was emerging from a series of less-than-successful albums and a period of musical irrelevance. When producer Daniel Lanois, who’d just come down from the massive success of U2’s Joshua Tree album, got the call to produce Dylan’s next album, he took Burn along with him. Both Canadians with an ear for sonic experimentation, Lanois had taken Burn under his wing in his early days, involving him on the majority of his projects throughout the 80s and 90s.

Together, Lanois and Burn created a sonic stamp that’s one of the most identifiable and influential of that era. Perhaps the most fruitful collaborator for both Lanois and Burn was Emmylou Harris, whose 1998 album Red Dirt Girl was produced by solely by Burn and won him a Grammy award. Ten years prior to that significant career moment, Lanois and Burn were working alongside Dylan and pushing him outside of his musical comfort zone.

“I think at the point that he came to work with Dan, I think Bono had been talking to him – sort of pushing him and saying, ‘Bob, you need to get back with it. You need to work with someone who can challenge you creatively and otherwise,’” Burn tells Connect. “I think Bono said it – if there’s one thing about Dan Lanois, he’s not going to just let it go. He’s going to push you.”

When recording began in early 1988, Burn says Dylan – who plays the Johnny Mercer Theater on Nov. 6 - would show up with a scroll of lyric sheets typed out, and would offer up two or three different versions of the song musically.

“It came to me that the music is sort of a vehicle for the lyrics,” Burn says of the early days of production. “He writes words. He’s a poet, and then the music is to support the lyric.”

Burn recalled that prior to getting to work on the album, he hadn’t heard much of anything in the way of songs or ideas.

“Before we started the record, I kept saying to Dan, ‘Have you heard anything?’ And he said, ‘I went over to his house and he played me a little snippet of one song or another.’ And I think it was about a week or so before we were supposed to start the record, and a cassette arrived from Bob. I thought we were going to hear some demos,” he says.

“We very excitedly went and put the cassette into the tape machine, and on comes Al Jolson. And the only thing that was in the note was, ‘Listen to this, you can learn a lot.’”

One day during recording, Burn recalls, he decided to ask Dylan a question.

“I said, ‘So, Bob, who’s your favorite songwriter?’” he says with a laugh.

“Why not, right? I think that’s a reasonable question. And he immediately said, ‘Gordon Lightfoot, Kris Kristofferson, and Gordon Bok.’ The way he described Gordon Lightfoot’s process, he said, ‘He writes perfect songs. I couldn’t write like him, I’d be dead by now.’ And I said, ‘What do you mean?’ The way Gordon would write, he’d literally lock himself into a hotel room – sort of like that scene from Apocalypse Now. To do that every time you have to go make a record, Bob said, ‘That would have killed me.’” 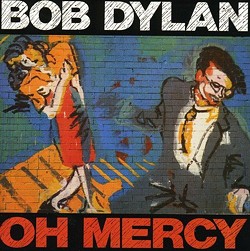 A couple of days before starting work on Oh Mercy, Lanois made it known to the production team that he wasn’t going to be “the guy that’s going to make a bad Bob Dylan record.” That was accomplished easily, thanks in part to the fact that the album was being recorded in the music-rich city of New Orleans.

“I think that when Bob came to make the record, he was sort of feeling a little lack in inspiration,” Burn recalls. “I seriously suspect that the vibe of being in New Orleans sparked his creativity.”

There was some tension during recording, which is documented in Dylan’s book Chronicles, Volume One. One verbal altercation in particular took place between Lanois and Dylan, and happened not long into production. He explains that there were some songs with different bands backing Dylan up, but a large portion of the album was recorded with Dylan and Lanois on acoustic instruments, Burn on keyboards and bass, and an 808 drum machine pulsing behind them.

“I think Bob was sort of freaked out by the fact that there wasn’t a bunch of guys playing on everything,” he says.

“We always worked Monday through Friday, and would start at 10:30 at night and finish at six in the morning. I remember he came in one Monday after the weekend, and I guess he played some things for some people. He comes in and he was acting kind of like he didn’t give a fuck and wasn’t that interested. After about an hour or so of this behavior, Dan was getting more and more frustrated. So Dan goes, ‘Is there something bothering you that you need to talk about?’ Bob sort of shrugged it off. Dan had been putting his all into this, as we all were.”

Dylan proceeded to complain that the album sounded “like a demo.”

“What Dan was trying to do was avoid the pitfalls of the old familiar,” Burn says. “That’s what Dan always tries to do, and I do that too. You don’t want to fall into the same old habits and do the same old shit over and over. So when Bob said this to Dan, Dan fucking hit the roof like I’d never seen him.”

Burn says he was so upset by what happened that he left to take a motorcycle ride, and things were back to normal when he came back to the studio.

“I thought, ‘This is going to be the end of it.’ And then I come back an hour later and they’re working away like nothing happened,” he says with a laugh.

Despite occasional tension, Oh Mercy became a landmark moment in Dylan’s career and garnered immense critical acclaim. 29 years later, Burn says that Dylan’s legacy is now cemented as someone who had a major effect on pop music.

“Look at the influence he had on The Beatles,” he says.

“They went from writing monosyllabic love songs to ‘Norwegian Wood’ and things like that. Young people could take themselves seriously. He obviously inspired so many other people. It’s hard to imagine Patti Smith without Bob Dylan.”

“He’s also a conduit, like many of the great people from that era are and were. Like Keith Richards – you got into the Stones, but then you thought, ‘Where the fuck did the Stones come from?’ Keith Richards obviously has a huge knowledge of blues, so it’s not just like it happened out of nowhere. There’s kind of an old saying that goes around Nashville, when you’re working on something and you get to a certain point and go, ‘What would Bob do?’”