"Another Body for Myself" is on view through Feb. 23 at the Hen House at the Stables, 7 Rathborn Drive. The opening reception is Feb. 14 from 6-9 p.m.

“Another Body for Myself” deftly, and ironically, weaves those elements into a show celebrating the self-portrait, with a reception on V-Day itself.

“I enjoy the irony of it being self-portraiture on Valentine’s Day,” laughs artist James Labuschagne.

Labuschagne is the organizer of the exhibition, which initially began as a collaboration between him and Atlanta-based artist Carter Flachbarth, who he met in an online business class.

“The idea was that me and Carter were talking about showing together, and originally we wanted to have two artists that represented two different SCAD campuses,” says Labuschagne.

But after more discussion, Labuschagne and Flachbarth chose to bring in more variety by adding two more artists who also worked with the figure: Elizabeth Winnel and Ben Tollefson.

The conceptual ties between all four artists are so strong that all the works are always in conversation with one another.

Labuschagne’s oil paintings use gloom and grotesque to reimagine the self-portrait.

“A lot of the work you’ll see at the show is riffing off traditional portraiture and based on the idea of having a model and realism and working in the figure,” says Labuschagne. “However, my focus conceptually is more in the body and how I deal with myself. It references Descartes in a sense, where I’m thinking about the dissonance between an internal observer and my physical body and the strain between those two things, and the anxiety that’s brought on by illness and pain and mortality.”

Labuschagne abstracts the figure into something that’s barely recognizable, sometimes pulling the internal parts of the body outside of itself.

“I’m considering particularly our viscera and our internal organs. We have our own idiosyncratic ideas about how the body functions internally, but we’ll never be able to observe that,” says Labuschagne. “But of course we have sensory organs and we have an emotional response to that, so I’m trying to aim, through using that practical oil painting technique, to recreate images that suggest these things.” 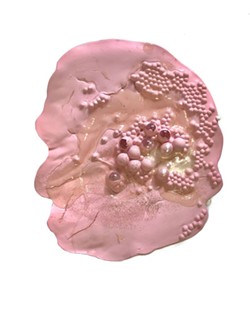 Labuschagne’s focus on the internal organs creates an interesting conversation with Winnel’s latest work. Typically a representational painter, Winnel verges into the nonrepresentational with this body of work she’s calling goops, where she pours paint and latex into a chunky puddle.

“There’s real hair in them, so they’re going to be portraits of sorts, figurative portraits in other ways,” says Winnel. “I really like the idea of pink as a coded thing itself, as a symbol that’s often not allowed to be for certain people. I was thinking of pinks as visceral, like our guts. All our guts are the same. Pink is this playful symbol of femininity, and pink is also a symbol for the insides we all share, our gutty ew mess inside.”

Winnel’s thoughts on the appropriation of the color pink are certainly present in her representational work as well, which are portraits of lips in bright pink shades.

“It’s exploring this idea of, you have gender assignments to certain things, like, ‘This is what it means to be male or female,’” says Winnel. “I don’t necessarily believe that this is what it looks like to be this person. I think it’s a spectrum and worth exploring, because I don’t think any of these restraints we put on people are in favor of anybody.” 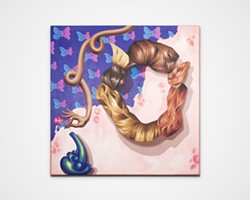 Tollefson also uses bright colors, particularly pinks, to explore the idea of gender in his paintings.

“I’m using bodies and fragments of bodies and interpretations of body parts to speak on personal issues and things like that,” says Tollefson. “I’m really trying to embrace frivolity and optimism and joy and things that are kind of coded as feminine and off-limits for a cisgender male person. I’m doing that with color and formal elements.”

The body of work Tollefson presents is a bit of a departure from his usual work.

“They use a lot of curvilinear line and trying to get into these organic, beautiful coded feminine forms,” he says.

Tollefson’s color palette is fairly similar to the one Flachbarth uses in his work, but his work uses self-portraiture in a very different way than the other artists. Flachbarth started out as a contemporary figure painter but quickly got bored. 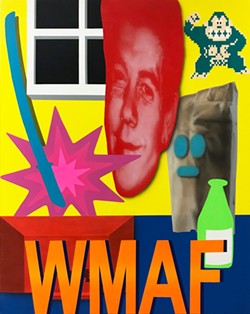 “They kept falling flat, and there was always this ego involved. I wanted to reduce that ego in my paintings, so my mind jumped straight to, ‘How do I create an objective narrative? How do I create this objective view of myself in an autobiographical way?’” remembers Flachbarth.

That’s where his computer programming background came into play.

“I created a program that enabled me to record things about my life and various objects, and then I put it into this program and it’ll spit out these compositions and create these non-narratives because it has no ego or sense of self to create a narrative with ego or self-identification in it,” he explains. “So it was this very personal look at myself, and a lot of that process involves the figure. If it doesn’t involve the figure, it still has a sense of self, or a non-sense of self.”

This exhibition presents interesting conversation between the works presented, so make sure to catch this one.