How the towering blues guitarist re-invents himself 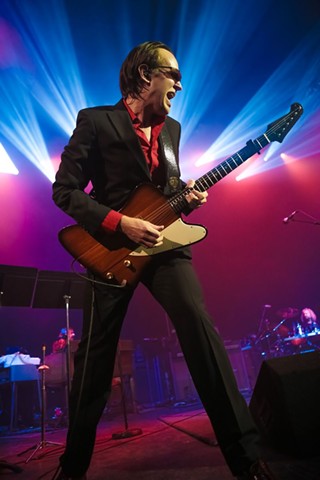 The occasion was An Acoustic Evening at the Vienna Opera House, on which the young New York guitar slinger was accompanied by a hand-picked "unplugged" band, including Irish fiddler and mandolinist Gerry O'Connor.

And that says something about Bonamassa who, despite the lack of a major label (whatever that constitutes these days) has become an enormous star — by virtue, virtually, of his tremendous skill and charisma as a musician, and nothing more.

He's had lots of exposure on PBS, which started spotlighting Bonamassa with 2009's Live From the Albert Hall and has turned him into their electric blues version of Josh Groban.

Just out is Tour de Force — Live in London, a four-DVD box (or Blu-Ray, if you prefer) of a series of shows Bonamassa put on in the U.K. in the spring. Individual CDs are expected in early 2014.

And with those releases, no doubt Bonamassa will top the charts yet again, leaving the other greats in his wake.

I was surprised to see you doing those acoustic shows in Vienna. I mean, you're an electric blues guy!

Joe Bonamassa: I've always kind of looked at acoustic guitars as kryptonite for someone like me. I'm not a flatpicker. I'm not a first-three-fret guy. There's acoustic guitar players, and there's guys who own acoustics ... and I'm a guy who owns acoustics. But there was always a part of the show where I would come out and do one or two acoustic numbers, and to my mind it was the sorbet: You can't hit 'em over the head with a Les Paul all night long. It just becomes a little bit too much.

So we had this idea about doing these gigs in Vienna ... and people just loved it. PBS has been airing our concert from Vienna, along with the electric concerts. So starting this fall — well, a week ago — we decided to actually take both bands out. Not do a "campfire" set, you know, where you use the same guys but they're playing different instruments. We're touring two different bands. And it's been going over great; the response has been absolutely fantastic.

Were you one of those guys who thought playing an "unplugged" show was maybe a little wimpy?

We do 45 minutes, take a 15-minute break, then we plug in the electric rig and we do an hour and a half set.

And so far, for people who've seen the gig so many times, they go "It's the best show I've seen. It's such a wide range of styles."

Do you like to challenge yourself in that way: "What can we do this year?"

Joe Bonamassa: Yeah. I also feel a real obligation to my fans, you know? I owe it to my fans not only to challenge myself, but to challenge them. We could just pretend it's 2009 and just keep doing the same Albert Hall set, but I think fortune favors the bold. And I think fortune favors the one that's willing to take a risk. A lot of people are like "At the height of your popularity, why would you want to switch gears, 180 degrees?"

Well, why not? The thing is, as long as it's good. As long as the end result is quality, then I'm in. If it's just changing stuff, or if it gets a little esoteric, you're just getting' wacky for the sake of gettin' wacky ....

You said recently that you'd never do the London marathon experiment again. Was it that hard?

Joe Bonamassa: It was four shows, four different venues, four different sets, five different bands. In five days. It was 60 songs over the course of five days — and yeah, I'll never do that again. It took the will to live out of you. I couldn't believe how much I had bitten off.

Just as soon as you come down from "Yeah, that was great last night! We worked so hard to get that thing to happen!" the next day you've got a horn band. The horn band goes great, "We pulled that off!" and the next night you're playing the Hammersmith Odeon as a five-piece doing a rock set, with Lenny Castro sitting in. Then you have a day off to reflect and be like, "holy shit."

And then you have the Albert Hall and the split set, the acoustic band with all those arrangements that are way different than any of the stuff you did the previous four days, and then a combination of all your electric stuff.

You finally just collapse over the finish line, going "Why do I do this?"

Hey, you got some great footage out of it.

Joe Bonamassa: The end result, I'm very proud of. I look at the box set and I go "That's a lot of work. That's a career's worth of work underneath this Marshall top and basket-weave cabinet." I'm very proud of it.

It was almost like Bilbo Baggins, closing the book at the end of The Hobbit. It's a chapter of my whole life. That part of my career is now past and prologue-d, and it's now up to me to figure out something new. A new direction to go.