The once and future reign of E. Shaver 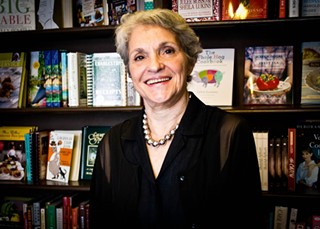 Esther Shaver has been selling real live books on Madison Square since 1976.

Not to get all nihilistic, but we bookworms are feeling pretty doomed.

Yes, our flat little magic boxes are amazing, pulling from the clouds the latest Dara Horn novel or all thousand pages of Gone with the Wind in an instant.

But us touchy-feely types know there's nothing like holding paper in your hands.

We also know the publishing industry is in the throes of a metamorphosis to rival Kafka's cockroach. When it's suggested that in the not too distant future the only available reading materials other than the Hep C pamphlets at the doctor's office will be on a screen, we get a mite hysterical.

A book won't be your butler or mind your bank account, but it won't run out of battery mid-sentence either. A book will never cast the barf green zombie glare upon your visage that we refer to in my house as "Glow Face."

Also, a book is still readable if you accidentally drop it in the toilet.

No disrespect to you online readers here at all: It's cool if you're scrolling through this on your iPad in between paying your power bill and posting a Vine video of your dancing ferret. The fact that you still read at all shows allegiance. It's just that there's something very unromantic about reading The Brothers Karamazov on the same device you use as an alarm clock.

But if Esther Shaver isn't freaking out about the impending death of the printed word, then we shouldn't be, either.

"The Internet has transformed reading, yes. But there will always be people who want to touch a book," assures the proprietor of E. Shaver Booksellers, who has indulged bibliophiles from near and far for the past 38 years from her cozy shop on Madison Square. "Books are not going to go away."

Still, when Esther announced her impending retirement last week, local bookworms suffered a collective panic attack. We hyperventilated over lost history and shook our fists at the injustice of another local independent business down. Even the city's other independent bookseller, The Book Lady herself, expressed dismay.

"For me, Esther IS Savannah!" exclaimed Joni Saxon-Giusti, who operates her own snuggly shop of out-of-print and local works around the corner on Liberty Street. "Someone is going to have some big shoes to fill."

Who will save E. Shaver's? Esther raised three kids upstairs, but all are grown and flown with lives entrenched in other places. It's simply not feasible for them to take over the shop, explains Esther's daughter, Evan Hanson, who drops into town once a month for her sales job.

"This is not You've Got Mail," deadpans Evan, calling up the charming 1998 romcom in which Meg Ryan runs an independent bookshop inherited from her mother.

So the inventory of E. Shaver's is up for sale, along with the swanky, four-story Greek Revival mansion and carriage house Esther bought and restored in 1975 with her late husband, Edwin. The store and the real estate are separate beasts, but best case scenario is that some wealthy book lover buys up the whole shebang for its listed price of $3.6 million. That lucky person could start every day the same way Esther has for almost four decades: Taking the elevator right down into the shop. (Hello, best commute ever!)

Dressed in elegant black linen, the grande dame of local literati wants to make it clear she isn't giving up on books; she's just becoming a more romantic protagonist in the next chapters of her life. For the last seven years she's split her week between Savannah and Beaufort, where her second husband, Dave Hartnett, has his home. A longtime vocal (and some consider cranky) political presence downtown, she's ready to settle into a less dramatic existence in South Carolina.

"I'm tired of a three-day-a-week marriage," she confides, tucking a lock of her gray pixie cut behind her ear. "And I'm 72! I'm not supposed to be working!"

Frankly, I think she just wants more time to read. She puts the rest of us compulsive readers to shame, devouring at least three books a week, from historical biographies (she counts Charles Flood's Lee: The Last Years as a recent favorite) and "anything about the Romanovs." (Anyone else want to play "Six Degrees from Dostoyevsky"?)

"Mostly I read junk," she shrugs, ticking off the last five titles of the Jack Reacher series. "I'm not an intellectual, I just love books."

It's too much to imagine a Savannah without E. Shaver's. It exemplifies much about what locals and visitors adore about the city: It's quaint and quiet, a respite from the tonal chaos of bleeping phones and honking horns and 140 characters. Its continued existence is a smug curtsey to the big box usurpers and Amazonian domination of our minds and economies.

But Esther has faith that the Hostess City and its book lovers will continue to thrive without her. From her vantage point, she's watched Savannah's downtown evolve from a crumbling, helpless Southern dame into a small-but-mighty 21st century cultural destination that's held on to its integrity — in spite of those who would sully it with tapas bars and double-decker buses. The changing of the guard at the corner of Bull and Harris is another of history's inevitable changes, hopefully curated with the same long-sighted consciousness.

"Who knows? Maybe it will be better!" she laughs merrily, waving away sentimental concerns with a gentle practicality.

Hardcore Luddites can take note that Esther doesn't hate e-readers at all, preferring their convenience to shlepping multiple beach reads on vacation.

She doesn't hate the Internet, either. Where do you think she met her husband?

"My kids told me I needed to go on Match.com," she grins. "And there he was."

In short, book nerds, don't fret; the end of E. Shaver's hasn't been written yet. And we'll still be able to read in the bathtub without electrocuting ourselves.

Even if it has to be as vintage intellectual chic, like Barry Manilow and mom shorts.