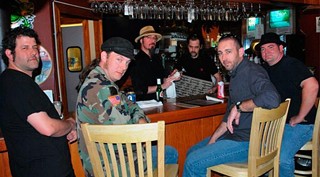 Audio Video Warehouse, 7700 Abercorn, has maintained a healthy used vinyl section for a while - they have some new stuff, too - and the store is getting in on the Record Store Day fun with a full-on, all-day concert Saturday afternoon. Starting at 2 p.m., the place will resonate with the tuneage of Listen 2 Three, Word of Mouth, General Oglethorpe & the Pandhanders, Roland, Each and Every Opus, Free Candy and Domino Effect. Plus DJs Dope Dialect, Kenny Watkins and Karmabeats. It's all free, and there'll be food there for purchase. Can you say win-win?

Ask Ray Lundy, the singer and guitarist for Bottles & Cans, why it took 10 years for Savannah’s premiere blues band to make its first record; he smiles and shakes his head.

“We never really thought about it,” Lundy says. “We’ve been more concerned with just gigging and keeping busy.
“Then people started asking ‘Hey, you guys got a CD or something?’ So we’d tape a show here and there, try to slap something together.” The guys would then give away the recordings to fans.

Sloppiness — a semi-drunken teeter on the close side of musical chaos — can be a big part of Bottles & Cans’ in–performance charm. “I think over all these years we’ve only had three rehearsals,” Lundy explains, “so everything is just on the spot, on the fly, at the shows.”

In the summer of 2011, however, the five members of Bottles & Cans spent a sweaty couple of days in Como, Miss., cutting Bottles & Cans with production, engineering, support and other good things provided by Jimbo Mathus (of Squirrel Nut Zippers fame) and Justin Showah (who’s in a lot of cool bands, including Mathus’ Tri–State Coalition).

There are 12 songs on the album, all but one original (everybody in the band writes), all of them cut more or less live in the studio.

All but Lundy and Walker have day jobs (Ellis, an Iraqi war veteran, works for Southside Fire & EMS). Ray and Mike have a side project, deftly dubbed AcousticA, so they can keep the bills paid by playing music on those nights when Bottles & Cans doesn’t have a gig.

AcousticA, like Bottles & Cans (and the group’s other side projects like the Turkey Callers) is centered around Lundy’s gravel–in–the–throat singing voice. Inspired by the raw, visceral power–punch of blues greats like Howlin’ Wolf, John Lee Hooker and Lightnin’ Hopkins, Lundy’s gruff bark of a voice is unique in all of Savannah.

“I started with Bob Dylan and went backwards from there,” Lundy explains, “to who he listened to, who influenced him.”

Lundy and his wife were living in Southern California at the time (interestingly, on the same mean streets that bred Tom Waits, a similarly growly white blues singer). He credits a friend, who worked part–time as a Hollywood stuntman, and sang blues on his off nights, with helping him develop his style. “The way that guy sang, he was kinda scary,” Lundy says. “He came out just screaming.”

Bottles & Cans, for which this Blowin’ Smoke show is a release party, is a gritty, greasy plate of the kind of gutbucket blues these guys do better than anyone else around here.

“I don’t think I have a really pretty voice, so I would prefer to take it the other way,” Lundy chuckles. “Let’s just make it as ugly as we can ...”

“I guess everybody wants to have their own thing. And I’d rather be different, anyway.”